The odds were against Baker Mayfield from the start of this game between the Los Angeles Rams and Las Vegas Raiders.

He was scooped off waivers by the Rams after being released by the Carolina Panthers earlier this week. Mayfield got the playbook on Tuesday night while flying to Los Angeles to meet with his new coaches and teammates, giving him between 36-48 hours to learn the plays if he was going to step under center.

But Mayfield, the former first overall selection of the 2018 NFL Draft, didn’t just grind out his first game in the toughest of circumstances. He led a miracle comeback to defeat the Raiders, 17-16, at SoFi Stadium in his first start as a Ram. 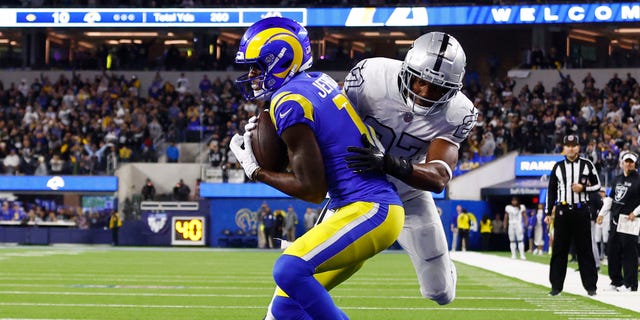 Van Jefferson #12 of the Los Angeles Rams catches the game winning touchdown against Sam Webb #27 of the Las Vegas Raiders during the fourth quarter at SoFi Stadium on December 08, 2022 in Inglewood, California. (Ronald Martinez/Getty Images)

The Rams’ starting quarterback wasn’t announced until Los Angeles ran out on the field for the first time, and it was John Wolford under center. He was dealing with a neck injury heading into the game and the Rams weren’t sure if he’d be ready to go.

Turns out, he might not have been because Mayfield jogged onto the field right after the Rams went three-and-out.

Mayfield’s first pass off play-action was complete for 21 yards to Van Jefferson, but he needed a bit more time to settle into the game. Remember, he had around 36-48 hours to learn his new playbook, not to mention chemistry with receivers, checks pre-snap and much more.

Mayfield’s first drive would lead to three points for Los Angeles, but he wouldn’t get more until late in the fourth quarter when a 17-play, 75-yard drive resulted in Cam Akers just getting into the end zone on a run play one yard out.

That made it 16-10 and Los Angeles would force a Raiders punt on the next drive to at least give themselves a chance. But it had to be a 97-yard miracle.

Given the situation Mayfield found himself in, it was a tough hill to climb. But what did Mayfield have to lose at this point in the game?

Thanks to an unsportsmanlike conduct call after getting sacked, Mayfield and the Rams were out of their own end zone and got to work. Ben Skowronek made a fantastic, contested grab for 32 yards on the next play, getting LA into Raiders’ territory. Mayfield continued to run the no-huddle offense and spiked it with 16 seconds left on the clock at the Vegas 23-yard line.

Then, he dialed it up to the defacto top wide receiver, Jefferson, who fought through contact and beat his man down the left sideline, hauling in the game-winning touchdown. 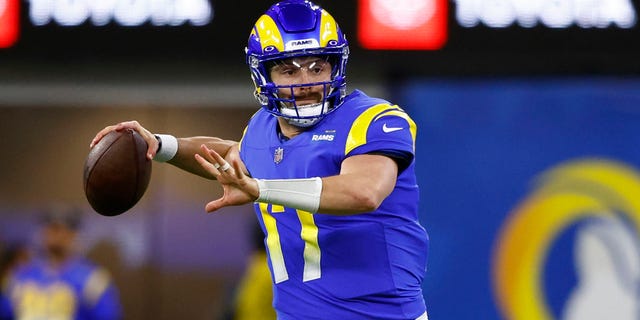 Baker Mayfield #17 of the Los Angeles Rams passes the ball against the Las Vegas Raiders during the first quarter at SoFi Stadium on December 08, 2022 in Inglewood, California. (Ronald Martinez/Getty Images)

Matt Gay nailed the extra point for the lead, and on the ensuing possession, Derek Carr’s first pass was intercepted by safety Taylor Rapp to ice the stunning comeback win, as LA snaps a six-game losing streak to move to 4-9 on the season.

Despite the odds set against him, Mayfield was 22 of 35 for 230 yards and one touchdown to collect just his second win as a starter this season. He went 1-5 with the Panthers before they released him.

For the Raiders, it was yet another head-scratching loss, especially with how they set the tone on their first drive of the game. Carr and the offense went 12 plays and 75 yards with Josh Jacobs busting it into the end zone to make it 7-0 early on. 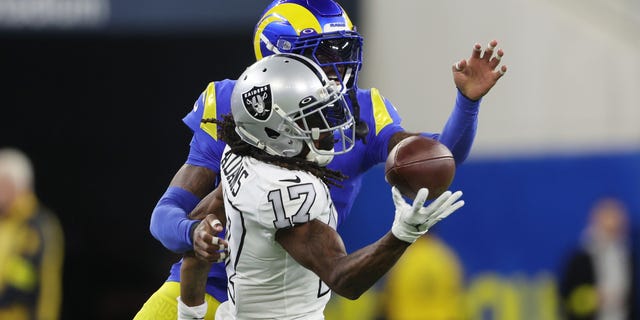 Davante Adams #17 of the Las Vegas Raiders makes a reception against Jalen Ramsey #5 of the Los Angeles Rams during the first quarter at SoFi Stadium on December 08, 2022 in Inglewood, California. (Sean M. Haffey/Getty Images)

The Raiders’ defense was doing their job, too, recognizing Mayfield was learning the offense on the fly and feeding off that. However, Carr couldn’t sustain drives for Las Vegas, especially in the second half when they were only able to secure one field goal. He also threw an interception in the end zone during the first half, which looking back now, was a game-changing play.

Carr would finish the game 11 of 20 through the air with 137 yards and two interceptions, while Jacobs had 99 yards on 27 carries.

PANTHERS TO RELEASE BAKER MAYFIELD AFTER ACQUIRING HIM IN OFFSEASON: REPORT

Davante Adams had a sick one-handed grab off Jalen Ramsey on the third play of the game for the Raiders, but he’d finish with just three receptions on seven targets for 71 yards.

The Raiders came into this game still in the AFC playoff hunt and a win to move to 6-7 would’ve helped their chances to secure a wild card spot down the stretch. 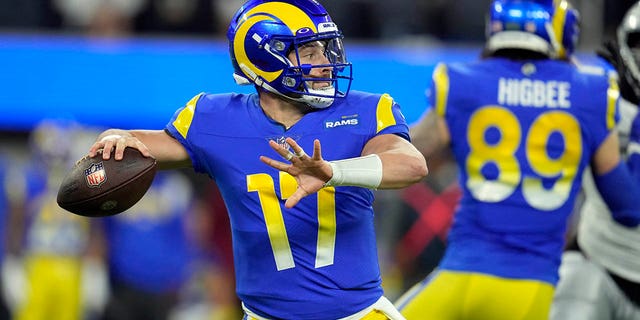 Instead, Mayfield reminded everyone why he was the first overall pick to play spoiler on Thursday night.