After Biden’s Department of Education proposed a new interpretation of Title IX earlier this summer, which would solidify gender identity in the law’s protections, nearly 240,000 comments were submitted from parents, lawmakers, activists, organizations, and concerned citizens about the new regulation.

"Once the federal comment period closes, then the Department of Education has an obligation to review all the comments that were submitted. So it needs to look them over and respond to each and every objection or suggestion that was raised," Christiana Kiefer, senior counsel at Alliance Defending Freedom, told Fox News Digital. 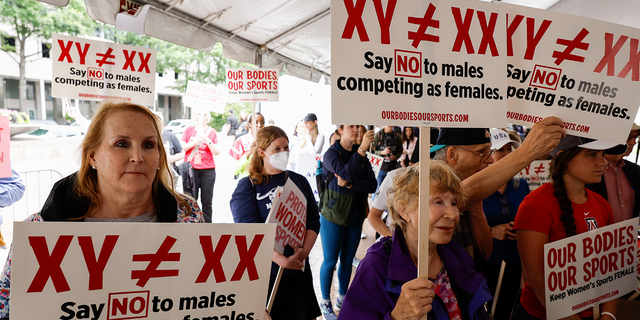 Demonstrators listen to the speaking program during an "Our Bodies, Our Sports" rally for the 50th anniversary of Title IX at Freedom Plaza on June 23, 2022 in Washington, D.C.  ((Photo by Anna Moneymaker/Getty Images))

"It should take as long, if not longer," Nicole Neily, president of Parents Defending Education told Fox News Digital. "Of course, it very much matters on whether the department is actually looking at them and taking them seriously … or moving ahead full steam, regardless."

Bob Eitel, president of the Defense of Freedom Institute, emphasized that the department is not responsible for responding to every individual comment, but rather the points that are made in each comment.

"They are required to respond to the arguments raised in the comments collectively," he told Fox News Digital. "So, if there are 20,000 comments raising the same point with the same language, they need only consider that … specific point one time and provide a reasoned analysis of how they are responding to that comment." 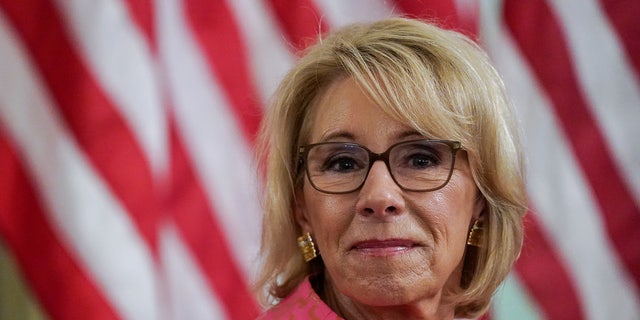 "The fact that there was this massive ground campaign of people who have not participated in the process in the past … it shows that this parent movement, this family movement, is not slowing down, regardless of what CNN and MSNBC may say, people are still really animated about these issues. People are still willing to speak up and step out to defend their families and their children," she said.

"I think it’s really encouraging, and if this administration continues to ignore the will of the American people, they do so at their peril."

The public will not know what is in the final Title IX rule are until it is announced from the Department of Education, but analysts are speculating of what may be included.

"What I hope … is that they actually withdraw the proposed regulations and abandon them entirely," Kiefer said. "They're fundamentally flawed. They have no basis in law. They are an example of government overreach and a redefinition of Title IX that will have wide-ranging harms to female athletes, to parents, to students, to professors."

"The hope is that in addition to responding to people's comments, they'll also maybe modify the rules to fit in with some of the legal concerns here and some of the concerns by the people," she said. "That is a very optimistic hope that they'll do that. My guess is they'll probably stick with what they originally put out." 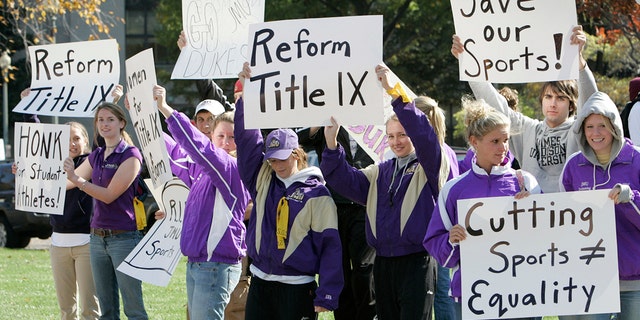 "I would like to think they will take into consideration people’s closely held beliefs, very valid concerns," Neily said. "People have raised major concerns."

"Unfortunately, it does seem that the Biden administration is bent on inserting its gender ideology across the board and including in Title IX," Kiefer added.

Until the department completes the rulemaking process, Neily noted that the new Title IX rule has not been implemented. But, Neily said, districts across the country are "preemptively starting to make assertions about their obligations under Title IX."

"It really shows where the heads of these administrators and bureaucrats are at," she said. 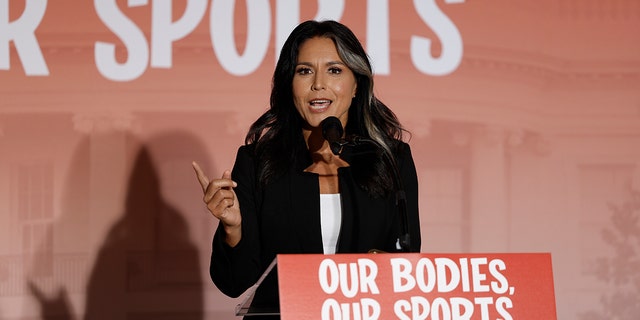 Former U.S. Rep. Tulsi Gabbard (D-HI) speaks at an "Our Bodies, Our Sports" rally to mark the 50th anniversary of Title IX at Freedom Plaza on June 23, 2022 in Washington, DC.  (Photo by Anna Moneymaker/Getty Images)

Eitel emphasized that the administration is under a time crunch to publish its new rule so as to keep it from being implemented in the middle of a school year.

"The administration is racing the clock. They are in a position to get this final regulation out as quickly as possible without making errors. And that is a bit of a minefield for them, Eitel said, adding that the final rule should be published and implemented before the 2023-2024 school year begins.

"There is no educational institution, no matter how they knew about the Biden proposal or the current regulations that now stand that wants to have a new complex regulations land in their lap in the middle of the stream," he said. "That is the last thing that anybody really wants."

Eitel also emphasized that any new Republican presidential administration would likely re-write the Title IX rules to undo some of the Biden administration’s changes.

"We can refer to this as soft of whiplash rulemaking … it reflects a lack of consensus around what Title IX does," he said. "They’re looking, literally, at a different rule every two, three, four years." 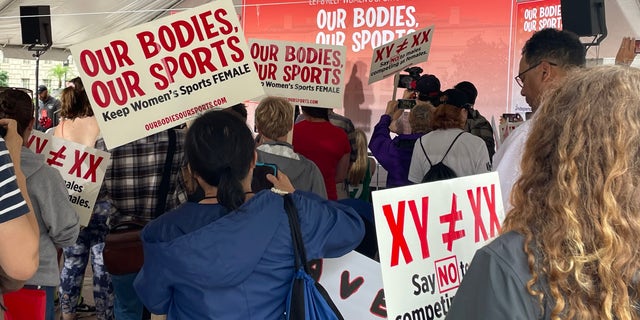 Rally-goers hold signs at the "Our Bodies, Our Sports" rally in Washington, D.C.  (Fox News Digital)

"This is something this is confusing for. It's not just universities. It's all K-through-12 institutions. It's any educational institution that includes all public libraries, all museums. They all have to follow these rules," she said.

"The school districts are in an impossible position of having conflicting regulations from one administration and then the other," Kiefer added.

Title IX, which was passed into law in 1972, prohibited sex-based discrimination in schools that receive federal funding. It stated that "No person in the United States shall, on the basis of sex, be excluded from participation in, be denied the benefits of, or be subjected to discrimination under any education program or activity receiving Federal financial assistance."

The Department of Education proposed new Title IX regulations earlier this summer, which included gender identity in the law’s protections. The administration also said it will release additional regulations on transgender students' participation in sports, a move that is likely to meet pushback from Republicans.

Kelsey Koberg is an Editor with Fox News Digital. Story tips can be sent to kelsey.koberg@fox.com and on Twitter: @KelseyKoberg.