The state dinner with America's oldest ally is the first state dinner of the Biden presidency. Asked why he picked France first, Mr. Biden said it's because he and Macron are friends. The two world leaders repeatedly emphasized Thursday the importance of that U.S.-France partnership on the national stage, as they work to defend democracy and freedom.

In a preview of the dinner earlier this week, the first lady said their meal will reflect that friendship. 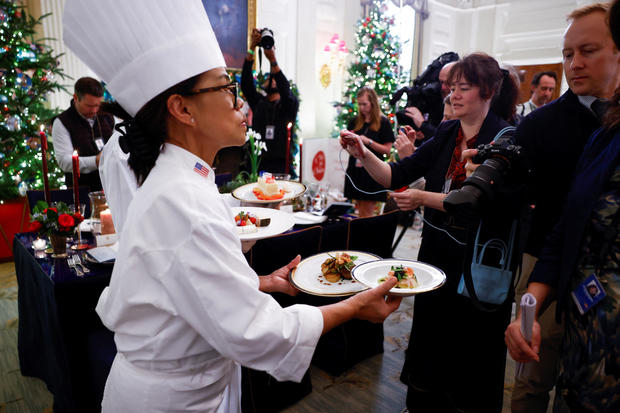 White House Executive Chef Cristeta Comerford holds dishes that will be served at a Dec. 1, 2022, State Dinner in honor of French President Emmanuel Macron and his wife Brigitte Macron, during a media preview hosted by first lady Jill Biden at the White House in Washington, D.C., on Nov. 30. EVELYN HOCKSTEIN / REUTERS

"It's an expression of welcome and friendship—a way to connect through a language that transcends words," she said. "And as each dish comes to the table, so too does the meaning behind it."

The tables boast vivid red roses and blue delphiniums, along with white irises, the first lady said, noting the petals reflect the "interwoven history of our nations." The first lady said the evening has taken "months" to prepare, and she's thankful for those who have made the visit "magical and meaningful."

The White House flew in 200 Maine lobsters this week as part of the meal. The first course, as White House Executive Chef Cris Comerford described to reporters, will be bright poached Maine lobster, dolloped with American Osetra Caviar from California.

"We came up with a menu that would highlight and express the state of America at the moment. We are featuring beautiful things from the land and the sea," Comerford said.

The main dish is beef coulotte, which has butter on top of a ribeye. The beef comes from farms in Iowa, Pennsylvania, Illinois and Virginia. The beef comes with shallot marmalade, carrots and Brussels sprouts.

A cheese course will include Rogue River cheese, served with grapes and grenadine walnuts, as well as honey from the White House. Another cheese comes from Sheboygan, Wisconsin. And the third is a Humboldt Fog goat cheese.

Dessert will be orange chiffon cake with roasted pears, citrus sauce and ice cream. The cake is covered in a chocolate glaze.

Thursday's festivities are taking place outside, in order to accommodate the 300-400 expected guests. 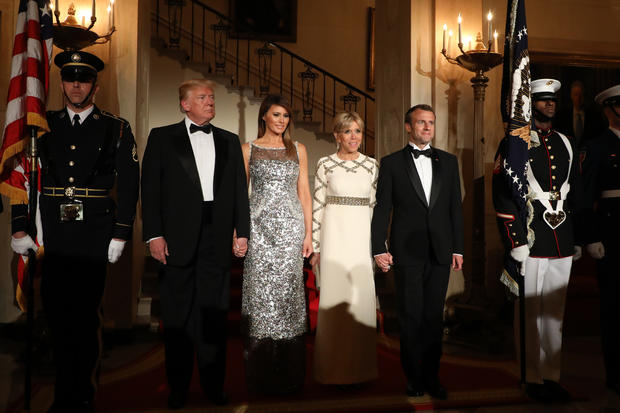 Some recent presidents have hosted a number of state dinners, and not just for America's close allies. Former President Barack Obama hosted Chinese President Xi Jinping at the White House in 2015.

State dinners hail back to the 19th century, with Ulysses S. Grant hosting the first one for Hawaii's leader in 1874 when Hawaii was not yet a state. Since then, they have been a way for nations to forge deeper ties, and for leaders and their spouses to create a personal connection.

Kathryn Watson is a politics reporter for CBS News Digital based in Washington, D.C.