Former National Security Advisor John Bolton investigates aattack on the US Capitol by Pat Siporon, White House Advisor on January 6, 2021. I think I should appear before the House Selection CommitteeThat day. His comments were made after former White House aide Cassidy Hutchison told the Commission that Siporon had expressed multiple concerns about the actions of former President Trump in the days before and after January 6. It is. Catherine Herridge in the news in an interview on Friday.

Bolton, former Hutchinson on the morning of January 6th, Trump with his supporters and the Houses of Parliament.

"You know that the president reacts very negatively, like all of us who have worked closely with the president for a period of time. I couldn't hear what he wanted to hear, "Bolton told Herridge. "But I think Cipollone was able to completely tell him," You're crossing the line. "

Cipollone took over Don McGarn as an advisor to the White House in 2018, and Bolton was President Trump's national security advisor at the time. .. 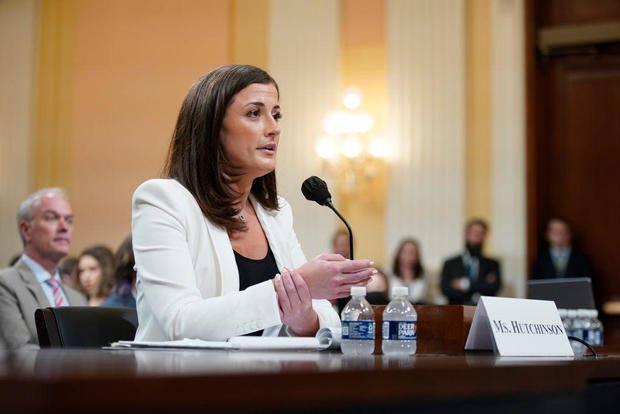 Cassidy Hutchinson, a former aide to Mark Meadows, then chief of White House staff, investigated the January 6 attack. Speaking during a hearing of the selection committee to be on Tuesday, June 28, 2022, at the US Capitol in Washington, D.C., USA.  AlDrago / Bloomberg

Hutchinson via Getty Images told the committee this week. She spoke with Ornart after President Trump addressed Ellipse on January 6. He wouldn't be able to go to the Capitol where his supporters were marching.

He said, "I'm the president of f *** ing. Take me to the Capitol now." Hutchinson said. Recollected. She went on to say that when Ornart was told that Trump had to return to the White House, he reached out in front of the car to grab the handle, and towards others in the car. He said he told her that he had rushed.

According to sources close to Secret Service, Ornart disagrees with the testimony that Trump grabs a person's arm, grabs a handle, and rushes, but the president is in the Capitol.

Bolton recalled Ornart as "very professional", stating that "he performed his duties rather than in a partisan way," and the Commission gave testimony from Ornart. He said he believed he should listen. Ornato was interviewed by the House Select Committee in a closed room, but is not open to the public.

Bolton feels that Ornart should be in front of the committee, but he didn't criticize Hutchinson. "She gave a very calm and consistent testimony," Bolton said of her appearance.

Attack on the US Capitol