This is what Brazilian football at its best looks like. The beautiful game — skill and savvy and the Selecão in their canary yellow, literally dancing in joy, with even the manager, Tite, joining in.

This was a perfect game, or near enough, as Brazil cut through South Korea with precision passing, sublime dribbling and the sort of performance that reminds you just what this team can do. It was a 4-1 victory in the Round of 16 for Brazil, which might just be the favorites in this tournament now, not just for the lopsided score but in the manner of which it occurred.

The column headline on the website for Folha de Sao Paulo, one of the country’s leading newspapers, put it best: “Brasil não dava espectáculo de tão alto nível em Copas desde o penta.” Translated: “Brazil hasn’t put on such a high-level show in the World Cup since the fifth,” as in its fifth title, back in 2002.

“We dream of the [sixth] title, obviously,” Neymar said in Portuguese, per ESPN Brazil. “But we have to step by step. It was the fourth game today, we have three left.” 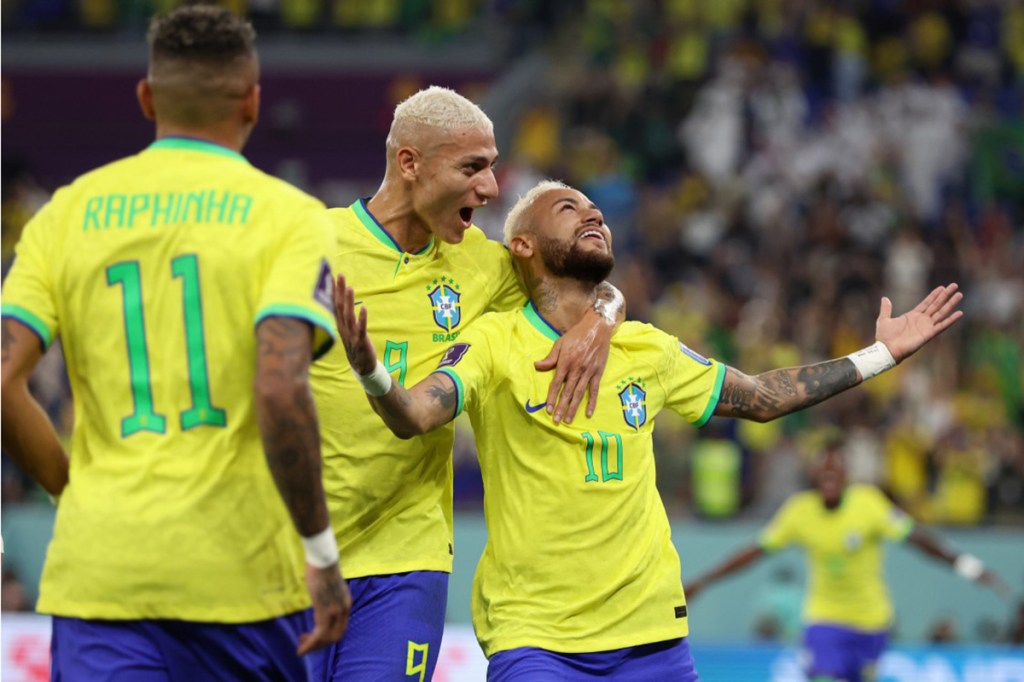 Richarlison, who already scored what might be the goal of the tournament with a bicycle kick against Serbia, exemplified that with Brazil’s third goal in the 29th minute. He got free of a defender after juggling the ball to Marquinhos. A perfect bit of passing from Marquinhos to Thiago Silva and back to Richarlison later, the Everton striker was slotting the ball past Kim Seung-gyu — a stunning team goal to punctuate a stunning team win.

This was two sides on a different level, and it is no insult to South Korea, which acquitted itself well in the tournament, to say that. Brazil dominated the ball, it suffocated South Korea in midfield, it passed in a manner reminiscent of the Selecão of old, knifing its way to goals.

“Over time, we grew in the competition,” Vinicius Jr. told TV Globo in Portuguese. “Every game we are more confident, more in tune.”

From the game’s seventh minute, when Vinicius finished off Raphinha’s cutback pass to make it 1-0, the match belonged to Brazil. Just six minutes later, Neymar — making his return to the lineup from an ankle injury — rolled a penalty shot in after Richarlison was fouled in the box to pull within one goal of Pelé’s all-time scoring record in a Brazil shirt.

“Suffering an injury like the one I suffered, I spent the night crying a lot,” Neymar said in Portuguese, “but everything worked out. It was worth it, it was worth the effort. … I think that all the suffering now is valid so that in the end we can crown something so beautiful that will happen.

Brazil is now 27-1-4 in its last 32 games across all competitions when Neymar starts. You do not envy their quarterfinal opponents, Croatia, which beat Japan on penalties earlier in the day to advance. On the World Cup stage, those two countries last met in 2014, when Brazil, the host nation, overcame an early own goal to win 3-1 as Neymar scored twice. 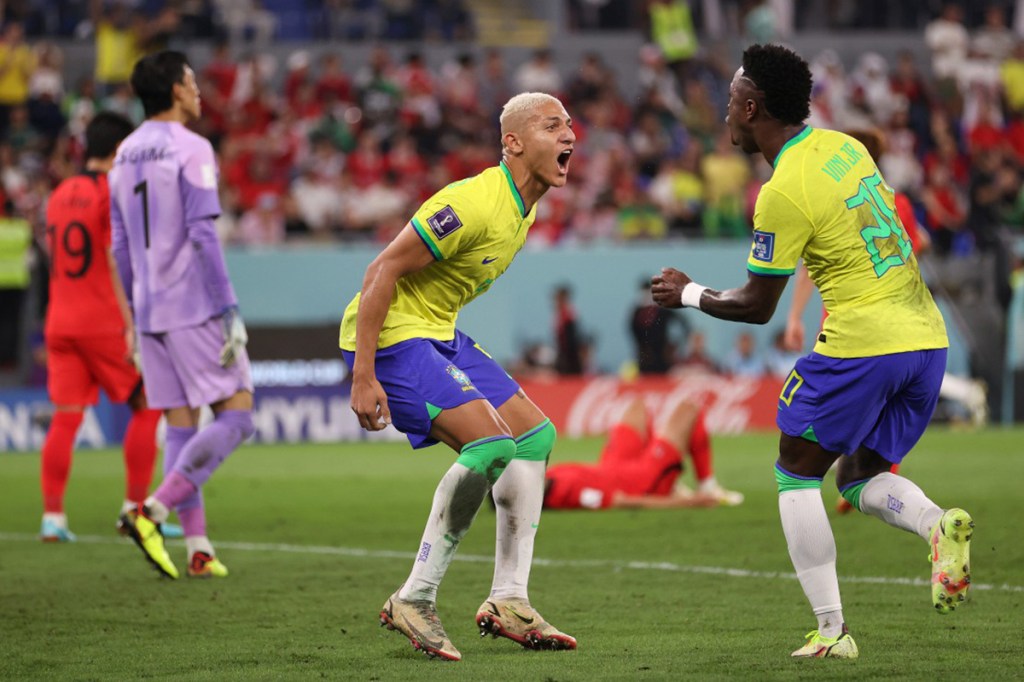 That tournament ended in what Brazilians call the Mineirazo — a 7-1 semifinal loss to Germany on home soil at the Estadio do Mineirào that left a scar on the footballing nation’s soul. This one might just end in some healing, in the form of a first World Cup title in 20 years.

There are still three wins to go if that is to be the case, and they won’t all be so easy. Brazil will be heavy favorites against Croatia, but the winner of Argentina versus the Netherlands looms in the semifinal. The Dutch eliminated Brazil in the 2010 quarterfinals and beat it in the third-place game in 2014; Argentina defeated the Selecão on home soil in the 2021 Copa América final, and has Lionel Messi playing for his last shot at the Jules Rimet Trophy.

Monday, though, was not an afternoon for looking forward. It was one for playing with unbridled joy. 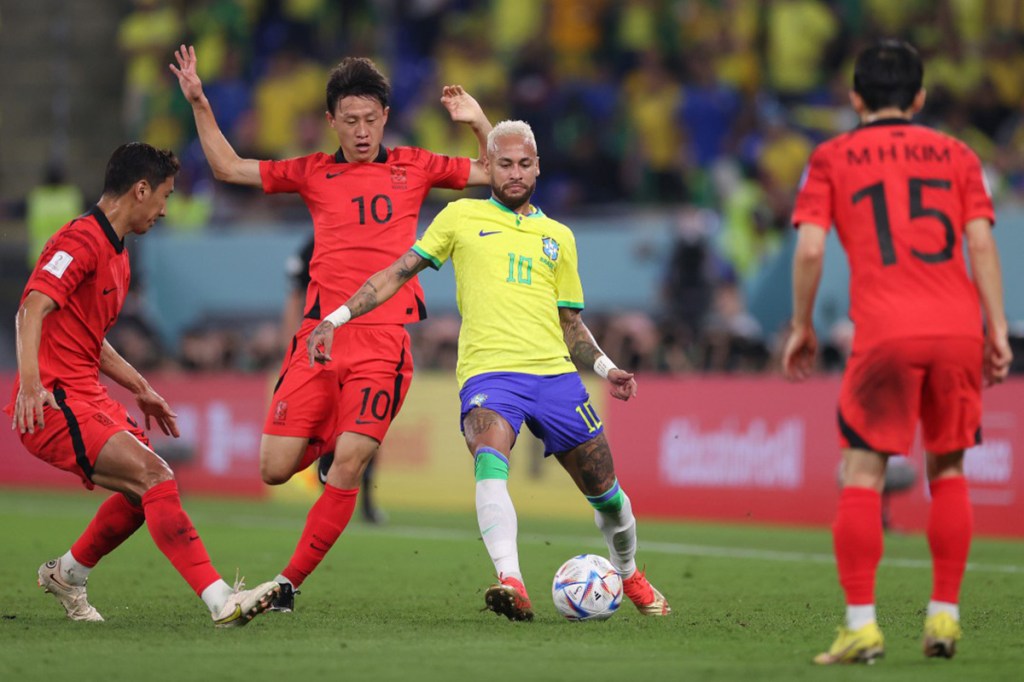 The game had become a full-fledged carnival by halftime, when Brazil went up 4-0 in the 36th minute. That passing move went from Richarlison to Vinicius to Lucas Paqueta on a volleyed finish.

Perfection made typical. Music made sport.

“May we continue dancing,” Vinicius said, “until the final.”