As authorities continue to investigate the grisly stabbings that left four University of Idaho students dead inside their home earlier this month, police said that detectives have now moved five vehicles from the crime scene to a storage location where they will continue to examine them and process evidence.

"Today, as part of the ongoing homicide investigation and original search warrant, detectives relocated five vehicles from within the police perimeter to a more secure long-term storage location to continue processing evidence," the Moscow Police Department announced in a news release posted on Tuesday.

Video posted by Fox News showed the snow-covered cars being towed away.

Police say they are currently looking for contextual details that might shed light on the events and people involved in the murders. Detectives have asked anyone with information to call the department's tip line at 208-883-7180.

In the early morning hours of Nov. 13, university students and housemates Kaylee Goncalves, Madison Mogen and Xana Kernodle, along with student Ethan Chapin, were killed at the women's residence near campus after returning home from nights out. There were two surviving roommates, who, police said, also slept in the house that night and called 911 upon finding one of the four deceased students unconscious the next morning. The Latah County Coroner later ruled each of their causes of death to be homicide by stabbing. 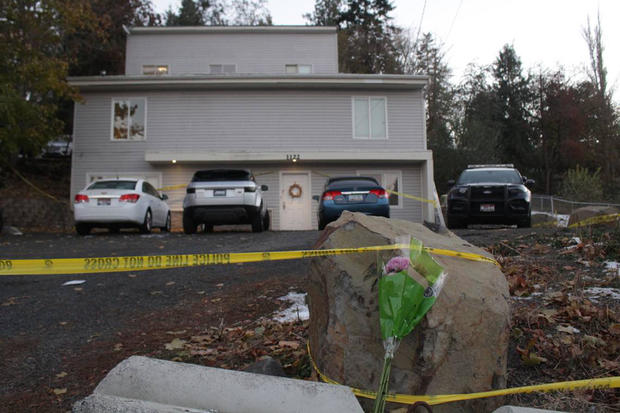 Officers at the Moscow Police Department still have not identified a suspect more than two weeks after the quadruple murder. The department said Sunday that tips continued to pour in while community members additionally uploaded more than 500 digital submissions to the FBI link seeking information in the case.

"We understand there is a sense of fear within our community," Moscow police said.

Although detectives have already used various tips and surveillance videos to rule out potential suspects, they are currently seeking additional tips and surveillance footage of "any unusual behavior" observed during the night of Nov. 12 — while Goncalves and Mogen were out in downtown Moscow and Kernodle and Chapin were at the university's Sigma Chi fraternity house — and into the early hours of Nov. 13.

Police previously said they were investigating "hundreds of pieces of information" that suggested someone was stalking Goncalves prior to her death. However, despite receiving a deluge of reports, investigators have not yet verified or identified a possible stalker, according to the Moscow Police Department.

On Nov. 16, Moscow Police Chief James Fry told reporters that investigators believed it was "a targeted attack." But in the ensuing days, however, police did not clarify that comment, or explain how they could make that statement without a suspect.

But in a statement Wednesday night, the department appeared to walk that comment back, calling it a "miscommunication," and saying that detectives did "not currently know if the residence or any occupants were specifically targeted."