Biden calls Warnock to congratulate him

President Biden called Warnock to congratulate him on his win, the president posted on Twitter.

"Tonight Georgia voters stood up for our democracy, rejected Ultra MAGAism, and most importantly: sent a good man back to the Senate. Here's to six more years," Mr. Biden tweeted.

Just called @SenatorWarnock to congratulate him on his win.

Tonight Georgia voters stood up for our democracy, rejected Ultra MAGAism, and most importantly: sent a good man back to the Senate. Here’s to six more years. pic.twitter.com/ibx5aprVs3

Warnock says "the people have spoken"

Warnock's crowd was enthusiastic as the senator and senator-elect expressed his gratitude.

"After a hard-fought campaign — or should I say, campaigns," Warnock said to cheering. "It is my honor to utter the four most powerful words ever spoken in a democracy: The people have spoken."

"I often say that a vote is a kind of prayer for the world we desire for ourselves and for our children," the reverend continued. "Voting is faith put into action. And Georgia, you have been praying with your lips and your legs. With your hands and your feet. Your heads and your hearts. You have put in the hard work, and here we are standing together." 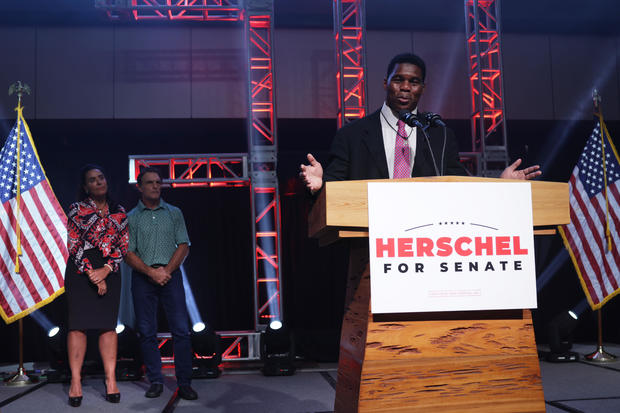 In brief remarks to his supporters, Walker acknowledged after the race was called for Warnock that the numbers don't add up for him.

Walker didn't mention Warnock by name in his brief remarks. The former football star pointed to his faith, and thanked his wife for her support. He also thanked his team, saying they "put up with a lot."

"There's no excuses in life," Walker said. "And I'm not going to make any excuses now because we put up one heckuva fight."

Schumer says Warnock's projected win is a victory "for democracy"

Senate Majority Leader Chuck Schumer, who will have one more vote in his chamber come Januar, said in a statement that Warnock's victory "shows once again that Democrats are in sync with America and MAGA Republicans are not."

"Reverend Warnock's well-earned win is not just a victory for Georgia, but also for democracy – as the last brick in our firewall against extremist MAGA Republican policies that threaten the very essence of our democracy," Schumer said. "Tonight, we celebrate – for my friend Raphael, for his beloved state of Georgia, for a Democratic Senate, and most of all, for our country. Tomorrow, we will roll up our sleeves and get back to work."

CBS News projects Warnock will beat Walker and retain his seat in the Senate, securing Democrats 51 seats in the Senate.

As votes in the Georgia runoff election are being tallied, political analysts are examining the long-term effects of the race on Capitol Hill. CBS News political correspondent Caitlin Huey-Burns and CBS News chief election and campaign correspondent Robert Costa joined "Red and Blue" to explain the lasting impacts heading into the 2024 presidential election.

President Biden offered an optimistic projection to reporters Tuesday night upon his return from a day trip to Phoenix.

Democratic Sen. Jon Ossoff, who has been campaigning for Warnock, told CBS News' Nikole Killion on Tuesday that despite that the balance of power is already set, the runoff election is still important.

"Putting aside the national balance of power, national politics, it matters deeply to me and to every Georgian who represents us for the next years in the U.S. Senate," Ossoff said. "The contrast between Sen. Warnock and his opponent in character, in competence, in integrity is as vast as I've ever seen."

The polls have closed across the Peach State, although comprehensive results won't be available immediately. Anyone who was in line at a polling station before 7 p.m. can still cast a ballot.

When asked if President Joe Biden would be doing any last-minute outreach in Georgia, White House press secretary Karine Jean-Pierre repeated Tuesday that Mr. Biden had phonebanked for Warnock over the weekend. Jean-Pierre said Mr. Biden set the "messaging" for Democrats in the midterm elections.

Mr. Biden did not travel to Georgia to campaign ahead of the runoff, although former President Barack Obama campaigned with Warnock over the weekend.