United Nations — As the U.N. General Assembly winds to a close on Monday, the focus on the horrific images of death and destruction in Ukraine during hundreds of world leaders' speeches underscored the inability of the United Nations to prevent or to end the Russian invasion of Ukraine.

Although President Biden announced large new aid packages and funding for Ukraine, countries around the world took the moment to plea for world leaders to deal with growing inequality, a focus of the opening speech by U.N. Secretary General Antonio Guterres.

On Saturday, the 193-nation Assembly heard from China and Russia and both took the moment to put the U.S. in their crosshairs.

China's foreign minister, Wang Yi, took aim at the United States, saying, "Protectionism can only boomerang," hoping that the U.S. will not abandon what has become a major trade relationship. Wang and U.S. Secretary of State Antony Blinken did meet at the sidelines of the U.N. meeting.

"Any scheme to interfere in China's internal affairs is bound to meet the strong opposition of all Chinese and any move to obstruct China's reunification is bound to be crushed by the wheels of history," he said.

U.S. Ambassador to the U.N. Linda Thomas-Greenfield told CBS News this week, that intense U.S. diplomacy has taken place in an effort to persuade China that Russia's invasion of a sovereign nation is contrary to China's longstanding policies. Wang's statements underscored what China President Xi Jinping had told Russian President Vladimir Putin in recent weeks - that China is uncomfortable with the war.

"China supports all efforts conducive to the peaceful resolution of the Ukraine crisis," Wang told world leaders. "The pressing priority is to facilitate talks for peace. The fundamental solution is to address the legitimate security concerns for all parties." 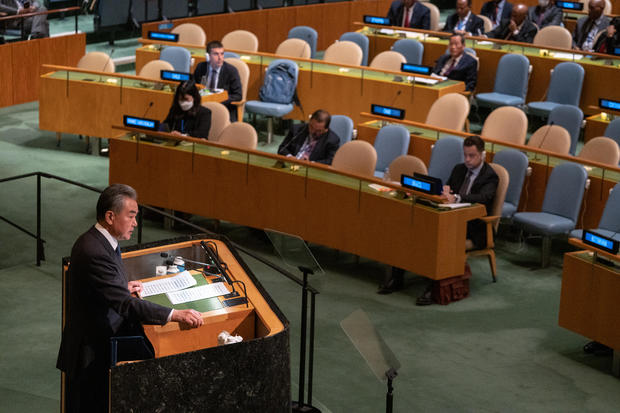 "President Xi called on the international community to pursue common, comprehensive, cooperative and sustainable security to respect the sovereignty and territorial integrity of all countries," Wang went on to say, regarding Ukraine.

Russia's Foreign Minister Sergey Lavrov spoke to the General Assembly and then to reporters, making clear that Moscow is not going to make the first steps in talks to end the war in Ukraine, decrying that "Russophobia in the West is unprecedented now, the scope is grotesque."

The comments came as Russian forces launched new military strikes in Ukrainian cities, including Zaporizhzhia. Russia is also holding referendums in portions of Ukraine it currently occupies. There, Ukrainians are voting on whether to become part of Russia. It's a move that is not only considered illegitimate by the West, but as possible justification for Russia's use of force later in these regions.

"The sham Moscow runs in occupied territories can't called be referenda," Ukraine's U.N. Ambassador Sergiy Kyslytsya told CBS News on Saturday. "And its results are and will be null and void."

Asked by CBS News about Putin's comments suggesting the use of nuclear weapons that Mr. Biden referred to, Lavrov referred to Russia's "doctrine for nuclear security" in which self-defense is core, a definition that is often in the eyes of the beholder.

As to next steps for the U.N., the attempt to garner unity against the war will continue, albeit without results. In a letter, obtained by CBS News, which was sent by Kyslytsya to Nicolas de Rivière — France's permanent representative to the U.N., and who is also serving as the current Security Council president this month — Ukraine has requested a meeting of the 15-nation body next week to discussion the "sham 'referendums' in the temporarily occupied territories of Ukraine."

Pamela Falk is the CBS News correspondent covering the United Nations, and an international lawyer.

Pregnant woman killed by assailants who stole her unborn baby

Why You’re More Likely to Get Sick in the Winter, According to New Research