A neighbors threatening letter to a Brisbane feline owner has caused a stir online, as the age-old debate of whether cats should be allowed outside unsupervised continues.

The feud between the two residents began when the neighbor approached the Brisbane woman over the weekend to inform her that her feline was entering their backyard to “pick a fight” with their cat.

As a result, the “mortified and apologetic” cat owner instantly covered the cat flap on the backdoor to avoid her delinquent cat from escaping, in what she thought was the right thing to do.

But the next day, the cat owner received a mildly highlighted council printout on controlling cat behavior, with an “abusive” note written on the back of it which she claims is allegedly from her neighbor.

“Control your animals or they will disappear!” the note said. 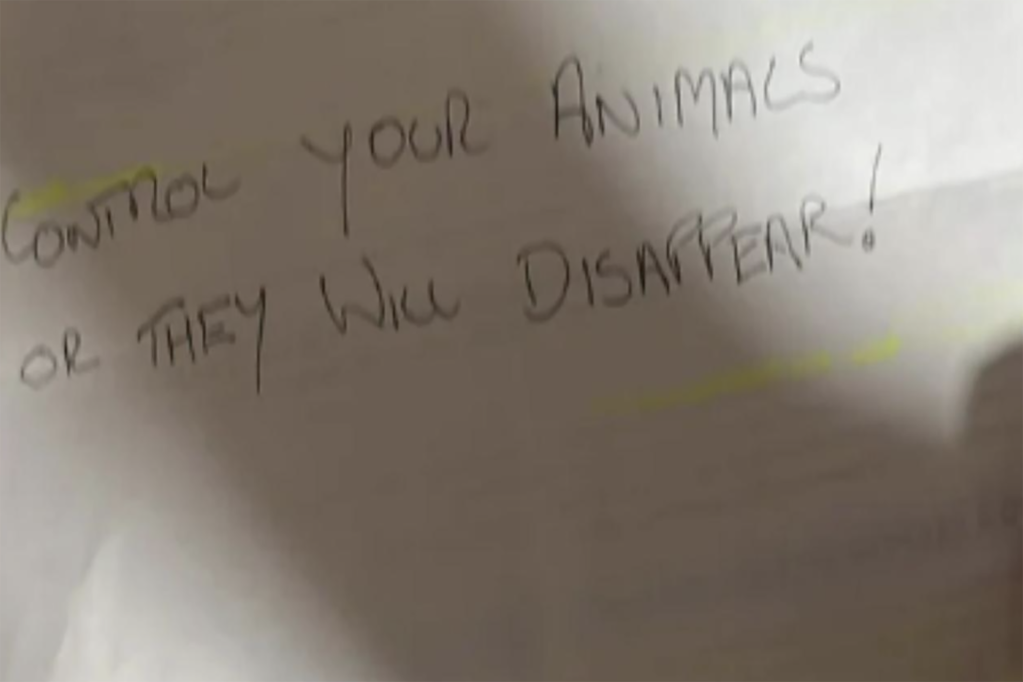 In hope of seeking some advice on what to do in such a situation, the letter’s recipient shared a photo of the note to online forum platform Reddit.

After explaining the circumstances around the letter, the “rescue trash cat” owner admitted that the house’s casement windows were the problem and was seeking guidance on whether installing a digital fence would help rectify the issue.

Those that were extremely against the idea of letting cats roam free “implored” residents to borrow cat traps from their council so that they could capture them and take them to the pound.

“I don‘t mind the inconvenience of taking the cats I catch into the council. My neighborhood benefits from every cat that is off the streets,” they commented.

Meanwhile, others labelled cats as “killers” with some doing their research on how much wildlife outdoor felines attack on average.

“Cats are killers, it‘s not the flavor of the month. There’s undisputed evidence that the wildlife is suffering because of cat owners. You’re being willingly ignorant on an important topic,” one reddit user said.

Some other commenters blatantly blamed the owner for letting her cat escape, despite it being the fault of a tradie who accidentally left the garage door open.

“Best bet is to keep your cat inside or enclosed outside. Doing the right thing from the start would have avoided the issues in the first place,” a reddit user said.

“You own the cat and it is your responsibility to keep that cat on your own property … If I found a cat had done something to my bird I would see red I can tell you that much,” a parrot owner commented.

“I think you’re doing the right thing. Sorry you had to deal with this, I would be mortified if I got that letter,” read a more supportive comment.

“You’re doing really well and tbh (to be honest) your neighbor should be keeping their cat indoors too? Accidents happen, what matters is the work you are doing,” said another.

Others suggested that responsible cat ownership goes both ways and that the neighbor should also keep their cat inside if they don’t want it to get attacked by someone else’s cat.

According to Brisbane City Council, cat-owners are required to microchip, register and provide an adequate enclosure for their cat.

While it’s unknown which local government area the resident belongs to, the cat owner has stated that she is complying with these rules.

“She’s a rescue street cat and I’m doing everything in my power to keep her in, wanting suggestions on how to keep her in or if those digital barriers work,” the owner commented.

“My animals are f****** registered and fully insured and fed premium quality food so get off telling me I’m irresponsible when I’m literally trying to act as responsibly as possible here.”

The website also states that cats are permitted outside if they are in an enclosed space and do not cause a nuisance to their neighbors.

If an annoyance is caused, the council advises that the affected person goes and speaks with the cat owner first before taking any further action.

“There are numerous ways a cat owner can safely contain a cat to their property and there are plenty of options that could be considered including but not limited to: Provide further stimulation, keeping the cat indoors, modifying existing fencing or (by) providing prefabricated cat runs,” Brisbane City Council’s website states.

Despite the debate, the letter’s recipient appeared to get in the final word, stating that she has ordered a digital fence as a “backup solution” and has completely removed the cat flap.

“Obviously this was gonna bring out the cat haters and I should have expected as much. Thanks to everyone who gave constructive advice,” she said.