Washington – Less than 24 hours after jury in Washington, D.C. convicted two members of the far-right Oath Keepers group of the rare and serious seditious conspiracy charge for crimes related to the Jan. 6 Capitol attack, Attorney General Merrick Garland commended the work of Justice Department prosecutors as "tireless" and said the Department will continue to work "to hold accountable those responsible for crimes related to the attack on our democracy on Jan.uary 6, 2021"

During brief remarks and questioning from the press on Wednesday, the nation's top law enforcement officer said his department started work on the criminal case – in which members of the group were accused of conspiring to use force to prevent the peaceful transfer of power from Donald Trump to Joe Biden – in January 2021, just days after the attack.

The group's founder, Stewart Rhodes, and an associate, Kelly Meggs of Florida, were found guilty of the most serious charge so far brought by the Justice Department in its sprawling probe into the attack on Tuesday. Three other defendants – Kenneth Harrelson, Jessica Watkins, and Thomas Caldwell – were acquitted on the seditious conspiracy charge, but convicted on other counts, including obstructing Congress' work that day.

Garland's remarks and the trial's completion came as Congress' own investigation into the Jan. 6 attack comes to a close. Rep. Bennie Thompson, the chair of the House select committee investigating the attack, said Wednesday the select committee conducted what is likely to be its final interview Wednesday. Investigators are preparing to release a report of their findings before Republicans take control of the House in January. 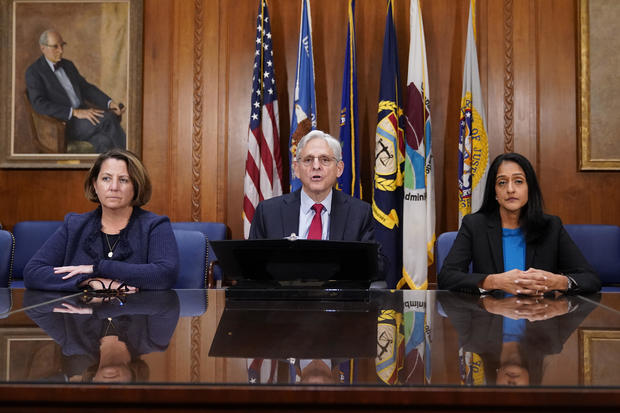 Garland told reporters on Wednesday that his department wants access "all" of the evidence collected by the select committee, including thousands of its interview transcripts, so that prosecutors can use the information "during the ordinary course" of their investigations.

Earlier this year, Justice Department officials revealed in a court filing that they needed the Congressional committee's interview transcripts as they were "potentially relevant to [their] overall criminal investigations." The committee opted to shield the evidentiary material from the public and the department until its investigation is complete.

Garland also heralded other "significant successes," he said the department achieved on Tuesday, highlighting the Justice Department's decision to intervene in the Jackson, Mississippi water crisis.

Prosecutors and city officials said they agreed to appoint a third-party interim manager to try to improve conditions that left thousands without drinking water over the summer and brought the water system to the brink of collapse.

The department filed a lawsuit alleging the city failed to provide drinking water in a manner compliant with federal law with the goal of working with Jackson officials to establish a longer-term solution to the disparities in the area.

"Much remains to be done" in Jackson and other communities of color, indigenous communities, and low-income communities that "bare the brunt" of environmental injustices, Garland said. Prosecutors are working with the greatest "urgency" to address the problem, he added.

"It's hard to imagine not being able to turn on a tap and not get safe drinking water," Garland said.  "We will bring this to conclusion as soon as we possibly can."

Assault On The U.S. Capitol