Dryden Hunt competed in all but six regular-season games for the Rangers in 2021-22, but skated in only three of the club’s 20 playoff contests.

While it was tough to go from being a lineup staple to watching from the press box, the 26-year-old winger said he understood why he was edged out by the three forwards the Rangers picked up at the trade deadline. Hunt recognizes the opportunity he got last season — over which he saw significant time on the second line with Artemi Panarin and Ryan Strome (and Andrew Copp, who like Strome has since departed in free agency) — but No. 29 thinks he could’ve done more with it.

“I was well aware that I got a good opportunity and I probably didn’t make the most of it,” Hunt said. “It was something that I was well aware of and wanted to work on with myself.” 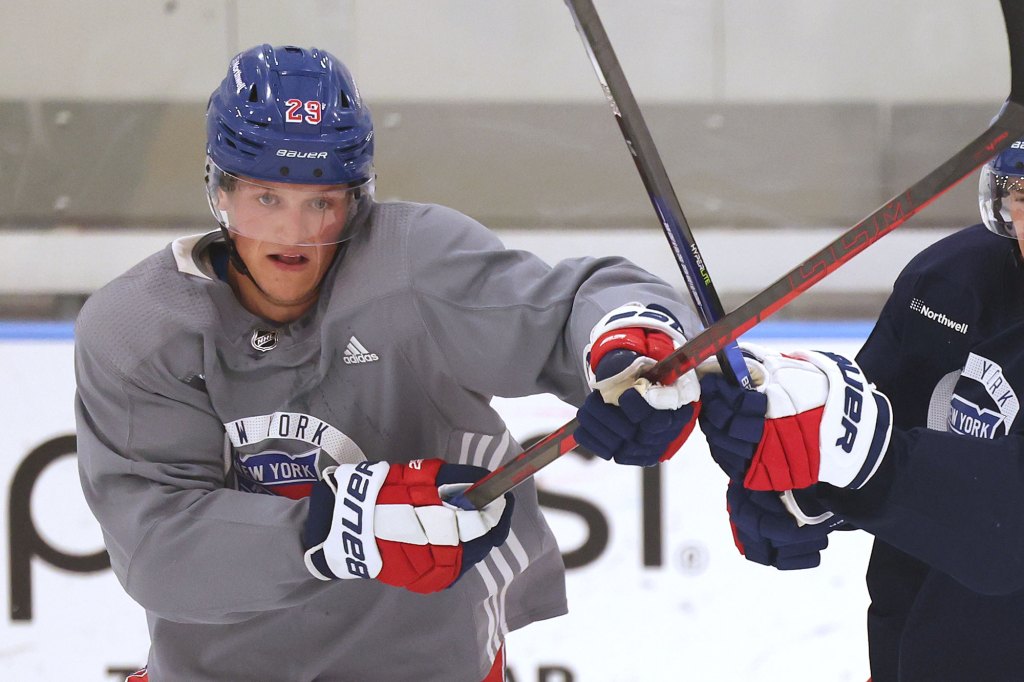 Entering his second season with the Rangers, Hunt is in a similar position as he was this time last year, vying for a lineup spot. In admitting he couldn’t have predicted skating alongside the players he did last season, Hunt said he spent his offseason in Calgary developing his all-around game — especially making plays under pressure.

Head coach Gerard Gallant said this weekend that Hunt has been his standout player so far this training camp. Aside from Barclay Goodrow, Hunt was the player Gallant shuffled around the lineup the most last season amid injuries and COVID-19 cases. Gallant also memorably inserted Hunt into the lineup in place of Kaapo Kakko for Game 6 of the Eastern Conference final.

There’s certainly a familiarity there now, but Gallant has been high on Hunt since the two joined the Rangers last season.

Hunt, who has been skating with Jimmy Vesey and Gustav Rydahl to start camp, should be in line for a fourth-line role this season. He spent a good amount of time there last season next to Kevin Rooney (now with the Flames) and Ryan Reaves, as well as Tyler Motte (now with the Senators) and Jonny Brodzinski.

“I think every year you’re trying to compete for a spot, especially when you’re playing on a team like this where every year they’re going to be a good team,” Hunt said. “There’s obviously guys that came into camp and new guys and stuff like that. So every year I’m trying to prove myself.

“Definitely having [76] games under our belt and coming back with the same coaching staff and they kind of know what you bring, you have a bit of a — not a leg up — but you’re just more comfortable.”

Behind goals from Vesey, Chris Kreider, K’Andre Miller and Zac Jones, the Rangers cruised to a 4-1 win over the Islanders in their first of six preseason games Monday night at Madison Square Garden.

Brennan Othmann had two assists and two shots on goal in the victory, including a hustle play for the puck before feeding Miller streaking down the middle for the 3-0 score. Islanders new defenseman Alexander Romanov landed a massive hit on Othmann, who ended up with a bloody nose to go along with the rest of his stats on the night.

“He’s a character kid,” Gallant said of Othmann. “He wants to score goals, he played a good hockey game for us and it’s good to see the kid come back. The rookie game didn’t go that well for many of the guys.”

Igor Shesterkin turned aside all 14 shots he faced, while Dylan Garand gave up one goal on 10 shots.