Southern California's most famous mountain lion, P-22, will be captured and given a health examination after he killed a dog that was being walked in the Hollywood Hills, wildlife officials said Thursday.

"P-22 is a remarkably old cat in the wild and, after being deemed responsible for killing a leashed pet last month, may be exhibiting signs of distress," the California Department of Fish and Wildlife said in an announcement with the National Park Service.

After being examined, authorities will "determine the best next steps for the animal while also prioritizing the safety of surrounding communities," the agencies said in a joint statement. They didn't indicate what might happen to the cougar. 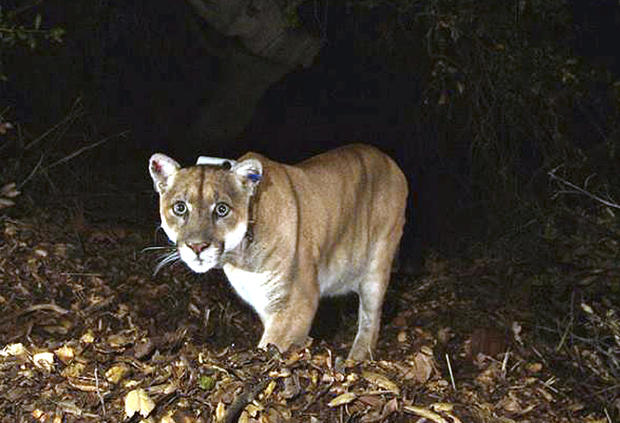 P-22 wears a tracking collar as part of a park service study and is known by Southern Californians for traveling across two freeways to reach his roaming grounds, which are surrounded by urban areas. The big cat is regularly recorded on security cameras strolling through residential neighborhoods near Griffith Park, a sprawling wilderness and picnic area.

P-22 is believed to be about 12 years old, making him the oldest Southern California cougar currently being studied. Most mountain lions live about a decade.

"This is an unprecedented situation in which a mountain lion has continued to survive in such an urban setting. As P-22 has aged, however, the challenges associated with living on an island of habitat seem to be increasing and scientists are noting a recent change in his behavior," the state wildlife department said.

P-22 usually hunts deer and coyotes but last month, the National Park Service confirmed that the cougar attacked and killed a Chihuahua mix that was being walked in the narrow streets of the Hollywood Hills.

P-22 also is suspected of attacking another Chihuahua in the Silver Lake neighborhood last Sunday. Owner Rene Astorga told KABC-TV that he punched and kicked until the cougar released the dog, which needed stitches.

"At that point it was a fight-or-flight instinct," he told the station. "I started punching or kicking - never let go of the leash until finally I felt he was loose. I picked up my dog and ran inside the house."

Known as the "Hollywood Cat," P-22 has been the face of the NPS' lion-tracking effort, CBS Los Angeles reports. His exploits have been documented in various media accounts, particularly for some of his more notable exploits -- crossing a pair of freeways, hiding out under a Los Feliz home in a standoff that drew widespread media attention and even being named a suspect in the killing of a koala at the Los Angeles Zoo.

Beth Pratt, California regional executive director of the National Wildlife Federation, said she has faith the state and federal wildlife authorities will make the right decision about the lion following a health evaluation.

"P-22 has given us so much," Pratt said in a statement. "He is a beloved wild mountain lion that survived against all odds, and his plight of being trapped in Griffith Park after making a perilous journey across two of the busiest freeways in the country showed the world how harmful our roadways can be to mountain lions and all wildlife. He captured the imagination of people around the globe, and his story inspired the building of the world's largest urban wildlife crossing outside of Los Angeles so that other area mountain lions don't suffer the same fate."