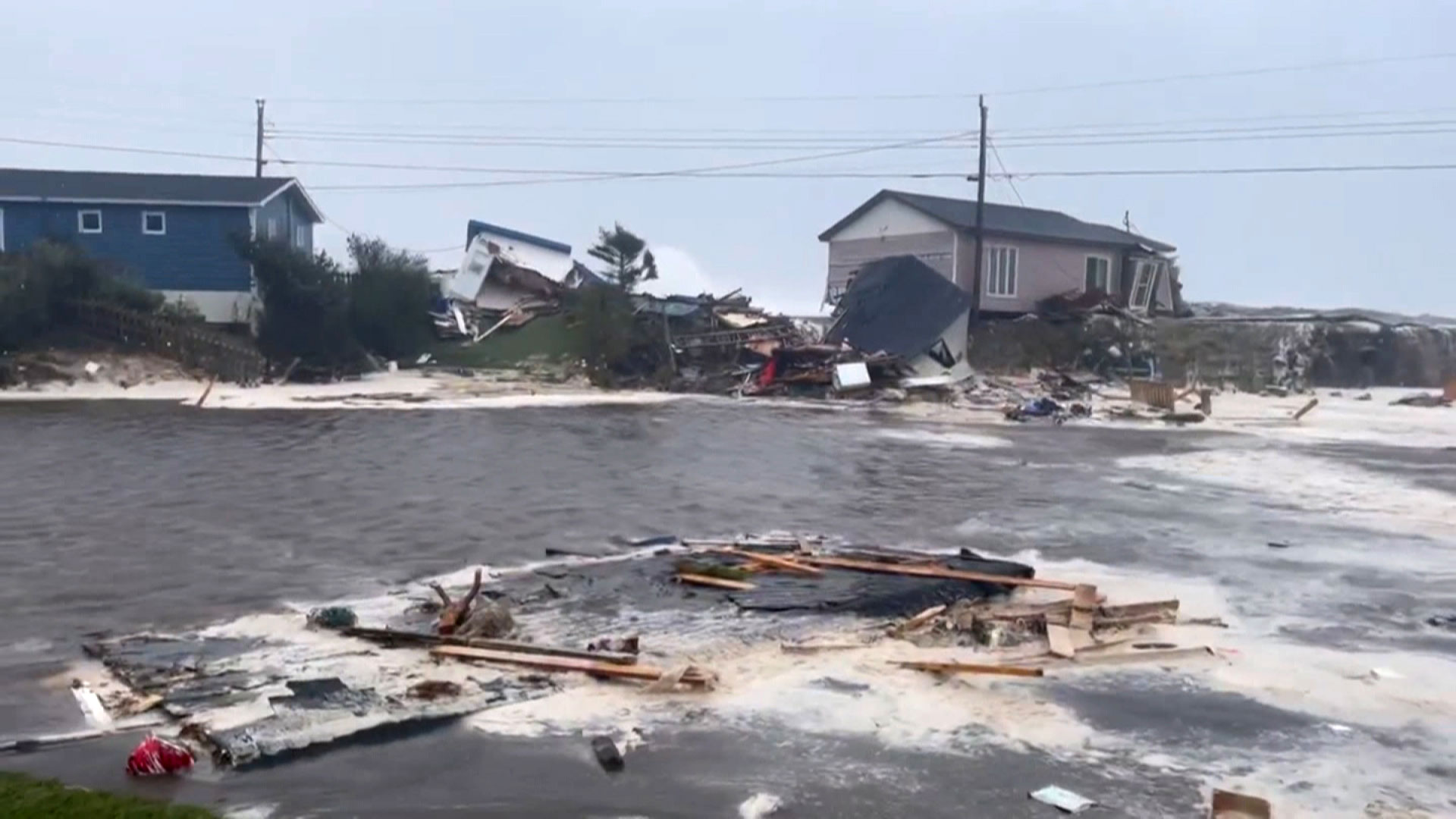 The mayor of a town in Newfoundland urged residents to take caution and follow emergency orders as Fiona made landfall on Canada's Atlantic coast this morning.

Port aux Basques Mayor Brian Button posted a video on his Facebook, pleading with residents to stay off the streets unless an evacuation order is issued. He said too many people are walking around town now and taking pictures.

Button said he “can’t stress it enough” that people need to go inside and stay there throughout the duration of the storm, as there’s already some destruction with downed telephone poles and trees.

“Anyone being told to leave their homes – you need to leave. No ifs, ands or buts,” Button said. “My only message to you people right now is: If you don't leave now, we may not be able to get you out of there when we really need to. So, you need to go now. Houses can be replaced, but you can't be.”

The coastal town is located in southwestern Newfoundland. 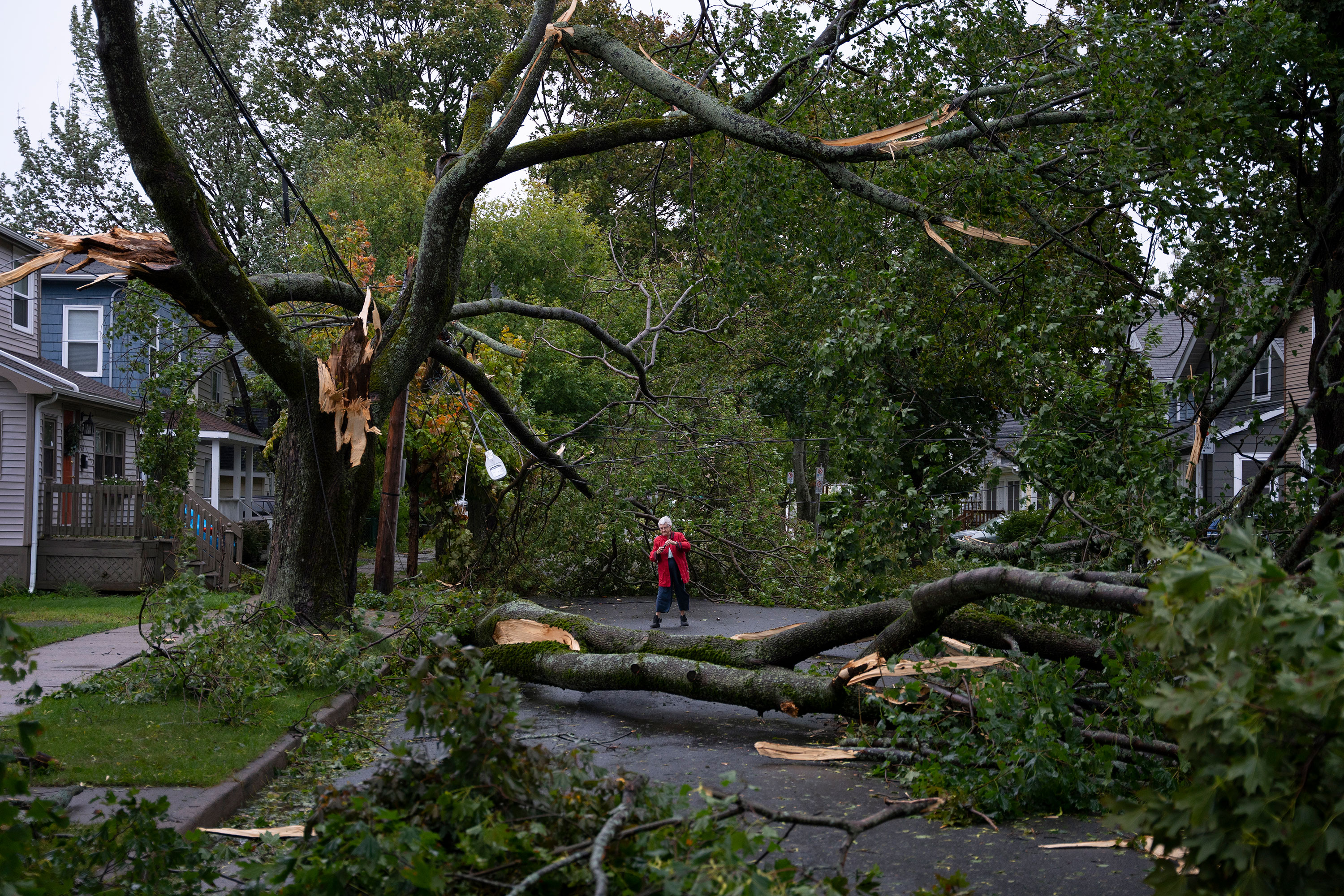 A resident surveys damage on her street in Halifax on September 24. (Darren Calabrese/The Canadian Press/AP)

Halifax Mayor Mike Savage updated CNN on the damage that his city, the capital of Nova Scotia, has sustained due to Fiona.

"It's been a wild night. ... We've had hurricanes here in Nova Scotia and in Maritime Canada before, but this one is pretty bad. A lot of uprooted trees, power outages all over the place, and our bridges and our connections to transit are all closed out," he told CNN's Boris Sanchez.

"Here in Halifax, we're starting to see the end of the active part of this and we can start to do more damage assessment," he said.

There's some "severe damage for sure," he continued, as officials just found out about an apartment that had a roof collapse and needed to have 100 people evacuated.

"With climate change, these (are) becoming more frequent, as are the volatility of winter storms, snow. So we're taking a lot of measures here in the city of Halifax to protect our city. We have a very good climate action plan; that's going to require investment and support. ... But absolutely, we're getting more of these and we have to be ready for them," he said.

Police in Charlottetown, Prince Edward Island, urged residents to stay off the roads as Fiona downed power lines and trees.

"Conditions are like nothing we've ever seen," authorities said in a series of tweets.

The island is one of eastern Canada's maritime provinces, which are taking the brunt of the storm Saturday morning. The large island is located off New Brunswick and Nova Scotia in the Gulf of St. Lawrence.

Officials issued a local state of emergency this morning in Cape Breton Regional Municipality, Nova Scotia according to a statement on the municipality’s Facebook.

Fiona slammed into Maritime Canada early Saturday morning with hurricane-force winds, heavy rain and large surf. Cape Breton was among the areas expected to take the brunt of the storm.

The municipality is asking residents to shelter in place as there’s widespread power outages, road closures and structural damage across the region, according to the statement.

The municipality is located in the northeast end of Nova Scotia where Fiona is now passing through, according to tweets from the Nova Scotia Emergency Management Office.

“Across the province, we’re hearing reports of damaged trees and power lines as the storm continues to pass through,” NSEMO said. Crews are currently assessing damage, according to NSEMO.

As Fiona, now referred to as a post-tropical cyclone, has made landfall in Nova Scotia, there are over 540,000 outages reported in the Canadian Maritime provinces, according to poweroutage.com.

Nova Scotia is reporting 413,556 customers in the dark of the nearly 500,000 it tracks, according to the website. Outages are also affecting Prince Edward Island, with all of its 84,561 customers currently without power, and New Brunswick, with 44,159 customers without power.

In a tweet late Friday night, Canadian Prime Minister Justin Trudeau said his team is monitoring the situation with Fiona in the Atlantic Canada and Quebec.

Fiona made landfall at around 4 a.m. ET between Canso and Guysborough counties in eastern Nova Scotia, Canada, as a very strong post-tropical cyclone.

An unofficial barometric pressure of 931.6 mb was recorded at Hart Island, which would make this the lowest-pressure land-falling storm on record in Canada, according to a tweet by the Canadian Hurricane Centre. Wind observations on Beaver Island in eastern Nova Scotia were recorded at 94 mph (152 km/h).

Fiona is expected to pass through Cape Breton on Saturday morning and then reach the southeastern Labrador Sea by late tonight. Storm surge, heavy rain, strong winds and large waves will accompany this storm as it races northward at over 40 mph (65 km/h).

Fiona is “on track to be an extreme weather event here in eastern Canada,” forecasters with the Canadian Hurricane Centre said on Friday afternoon. Recent rainfalls have left the region saturated and Fiona could bring another one to two months’ worth of rainfall.

“This could be a landmark event for Canada in terms of intensity of a tropical cyclone,” and it could even become Canada’s version of Superstorm Sandy, said Chris Fogarty, Canadian Hurricane Centre manager.

Fiona weakened slightly on Friday to a Category 2 storm. Fiona had been a Category 4 storm early Wednesday over the Atlantic after passing the Turks and Caicos and remained so until Friday afternoon.

Walmart is practically giving away this The Pioneer Woman 19-piece cookware set, get this Cyber Monday deal while you still can

Suspect in 2016 double murder, face-biting case found not guilty by reason of insanity

Walmart is practically giving away this 26-piece Rubbermaid container set for $8, get this Cyber Monday deal while you still can

Bats have a better vocal range than Mariah Carey: study

Megyn Kelly blasts ‘disgusting’ Kim Kardashian over Balenciaga ties: ‘Money is worth more than her morals’

Best Cyber Monday deals you can still get on Apple iPad: Get best-ever pricing on Apple tablets while you can at Amazon and Walmart

Chloë Grace Moretz: Dealing with ‘older men’ on set as a teen was a ‘mind f–k’

Holiday deals live blog: Cyber Monday deals you can still get at Walmart, Amazon and more

The Best Cyber Monday TV deals that you can still get: Samsung, Sony, LG and more

Stream It or Skip It: ‘Christmas on Mistletoe Farm’ on Netflix, Where a Widower Takes His Five Kids to the Country for the Holidays

Republican Skepticism of Trump Has Never Been Higher

Mayim Bialik reveals exactly how she and ‘Jeopardy!’ co-host Ken Jennings get along

What pet is most compatible with your zodiac sign?

How much is life insurance for seniors?

We were gay until we met each other: Our unusual heterosexual love story