A 19-year-old University of Florida quarterback was arrested Wednesday on allegations of possession and distribution of child pornography, the Gainesville Police Department reports. Jalen Kitna, the son of former NFL quarterback Jon Kitna, has also been suspended from the Gators' football program.

In a news release, police said they carried out a search warrant at Kitna's residence after receiving a tip from the National Center for Missing and Exploited Children. During the investigation, police learned that there were two images of child sexual abuse material shared through the online messaging platform Discord from Kitna's home. 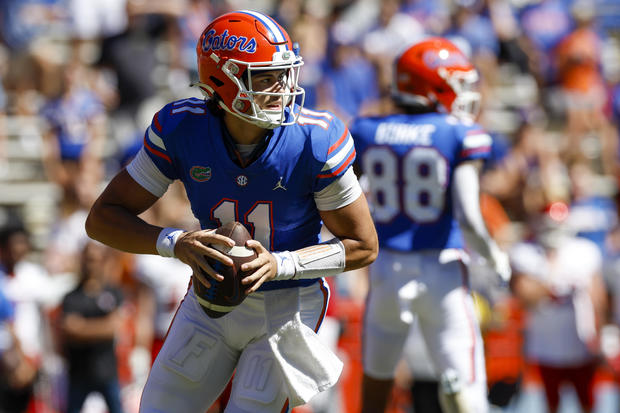 Kitna allegedly admitted to investigators that he shared the images, but that he thought it was "legal," since they were found online, police said. After sharing the pictures, though, he told police he realized he should not have due to the reaction from the Discord user they were sent to.

Kitna's Discord account was later deactivated, he told police, after he received an email from the messaging platform saying he violated its terms of service.

Investigators later discovered three more images of child sexual abuse material on electronic devices that were seized from Kitna's home as part of their search, police said. Kitna was arrested on two counts of distribution of child exploitation material and three counts of possession of child pornography.

Kitna committed to the Gators back in 2020. He redshirted last season, and has appeared in four games this season. His father, Jon Kitna, played 14 seasons in the NFL for several teams, retiring in 2013.