Mapping the desecration of Black cemeteries

No one can say when human remains began surfacing in Clearwater, Florida. There was the pipeline crew that churned up bones in a trench. Later, remains of the dead were found at an elementary school, a swimming pool, and an office building. It seemed like a curse for what had been done in the name of progress—and greed—in the old segregated south. The truth of what happened in the '40s and '50s was meant to stay buried, but in a neighborhood called Clearwater Heights, residents with long memories recognized a grave injustice.

In the first half of the 20th century, Clearwater Heights was a Black neighborhood — thriving, proud and anchored by faith.

And so is St. Matthews Baptist, where we heard stories of childhood in the Heights, including those of Diane Stephens and Eleanor Breland.

Eleanor Breland: They had businesses, barber shops. There were hairdressers over there. There was a cab company. It only had one cab, but it was still a cab company.

Diane Stephens: Right there on Greenwood they had different places where even Ray Charles performed there. Also, James Brown performed up there.

But even the famous could not stay in a White Clearwater hotel, or walk on the beach or swim in the bay. Segregation bound their lives and exiled even their memory to segregated graveyards.

Scott Pelley: How many of you believe you have ancestors in one of these cemeteries? About half of you. 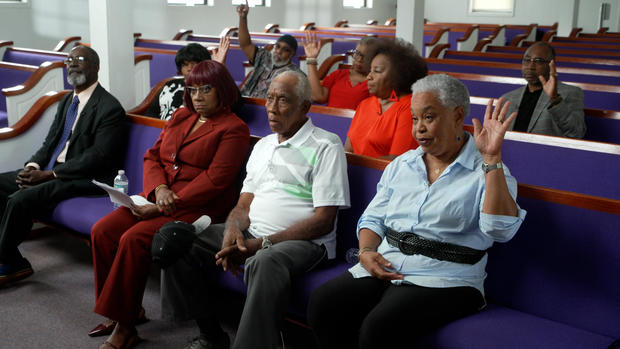 The segregated cemeteries of Clearwater were sacred ground until the ground became valuable. In the 1950s, headlines announced that the city of Clearwater made a deal on moving a "Negro" cemetery. Hundreds of African American bodies were to be reburied to make way for a swimming pool. A department store was planned for the site of another Black cemetery, where again, the bodies were to be moved. But O'Neal Larkin remembers, many years later, his first revelation that something was terribly wrong.

O'Neal Larkin: It's not an imaginary thing that I seen. It's what I seen with my own eyes.

Larkin, 82-years-old, watched a construction crew, in 1984, dig a trench through the site of a 'relocated' Black cemetery.

O'Neal Larkin: But I remember the parking lot where the engineers-- traffic engineer was cuttin' the lines through, and they cut through two coffins. That was my first knowledge of seein' it because I walked out there, and I seen it myself.

In 2019, the Tampa Bay Times reported many segregated cemeteries in Florida had been, essentially, paved. It was then that the modern city of Clearwater decided to exhume the truth. 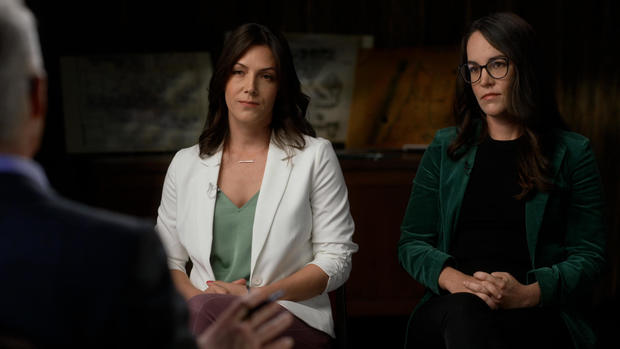 Rebecca O'Sullivan: People deserve to be treated with respect. That's the most important thing.

Rebecca O'Sullivan and Erin McKendry are archeologists for a company called Cardno. Cardno was hired by the city to map the desecration.

Erin McKendry: These individuals were loved. They were family members; they were fathers and mothers. And they were interred with love. 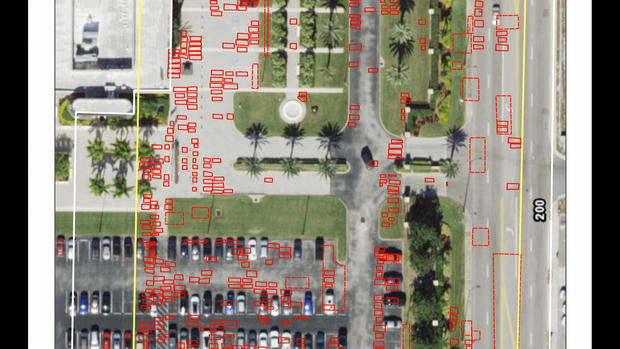 An overlay of likely graves in Clearwater, Florida

McKendry and O'Sullivan pushed ground penetrating radar over a segregated cemetery where an office site stands today. This overlay shows part of their discovery, 328 likely graves, many, under the parking lot, perhaps a few under the building and more there on the right beneath South Missouri Avenue. 550 graves are in the cemetery's record, McKendry and O'Sullivan found evidence of 11 having been moved in the 1950s.

Scott Pelley: So there may be hundreds of bodies still at that site?

Not far away, the archeologists probed another former cemetery.

Here, in the 1950s, rather than integrate the White community pool, the city said it would move hundreds of bodies to build a Black swimming pool and a Black school.

Erin McKendry: But the bodies were not removed. 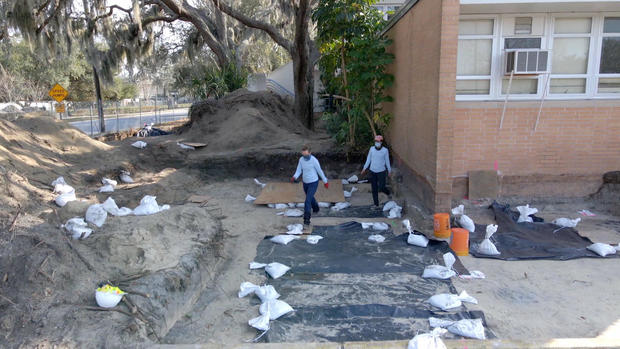 An excavation at the site of a former Black cemetery

A prayer was said over the site, then they planed the sand and sieved a century of time in search of grave markers or tributes. Inevitably, relics included human remains. Teeth at the office building site and bones at the school, which had closed in 2008 because it was obsolete.

Scott Pelley: Are there grave sites underneath the school?

Erin McKendry: All of the information and the data that we collected does indicate that there are additional burials likely below the footprint of that school building.

Archeologist: I would be very surprised if they didn't find any bones when they were over there.

O'Neal Larkin: Oh, they had to. 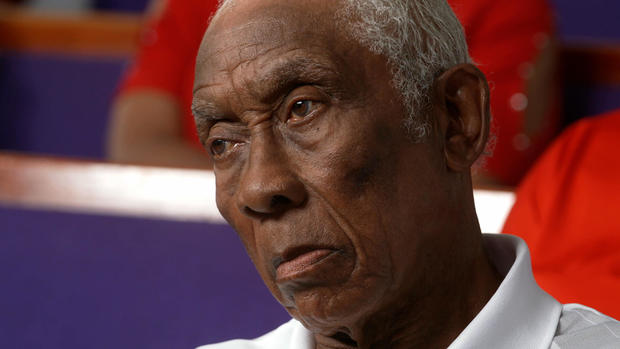 O'Neal Larkin watched the excavation and imagined the groundbreaking at the school construction site in 1961.

O'Neal Larkin: To dig the foundation to put this school upon…they had to hit some form of remains.

It's likely some families could not afford a tombstone, but the archeologists found graves were marked.

Archeologist: Doesn't that look like one of those metal plaque things?

Scott Pelley: It's a Mercury dime.

Erin McKendry: It IS a Mercury dime.

A dime, new in '42, was among many tributes left with the dead.

Erin McKendry: We also found this brass wedding ring at approximately the same location and the same depth as the dime.

The tributes and disturbed human remains were carefully reburied exactly where they were found pending a decision on what to do next.

Scott Pelley: If you could speak to these people who were interred and then lost, what would you tell them?

Antoinette Jackson: I hear you. I'm working. I want to recognize the contributions, the life you lived. I recognize and see your humanity. 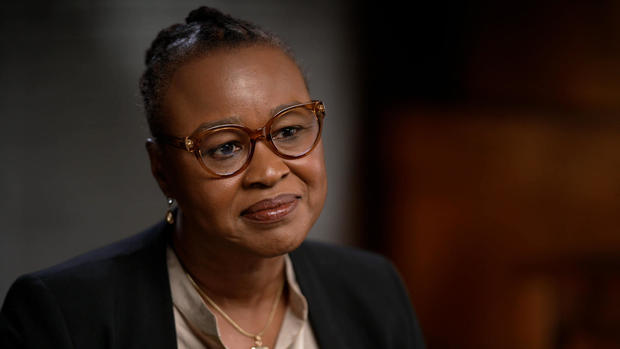 Antoinette Jackson: Not just Clearwater, it's nationally from New York, all the way out toward Texas, and all the way down to South Florida where these cemeteries had been built over, erased, marginalized, underfunded and need support in order to make them whole and have this history known.

Antoinette Jackson: This is not an isolated story, unfortunately.

So far, Jackson has listed about 70 effaced Black cemeteries nationwide.

Antoinette Jackson: What we want to bring forward is the memory, the knowledge that these sites were there, these places, these cemeteries, these families were there, live, died, worked, contributed to our country, to their communities, to our hometowns.

Scott Pelley: Is there evidence of white cemeteries being lost, abandoned, forgotten in the way that these are?

Scott Pelley: When a cemetery disappears, what is lost?

Muhammad Abdur-Rahim: A great deal of respect because you can no longer visit and bring closure to your own soul.

Barbara Sorey-Love: A cemetery supposed to be your final resting place.

In Clearwater, they're debating how to honor those entombed beneath the school, South Missouri Avenue and the property of the FrankCrum Company, which bought its headquarters for its staffing business decades after the cemetery was erased. 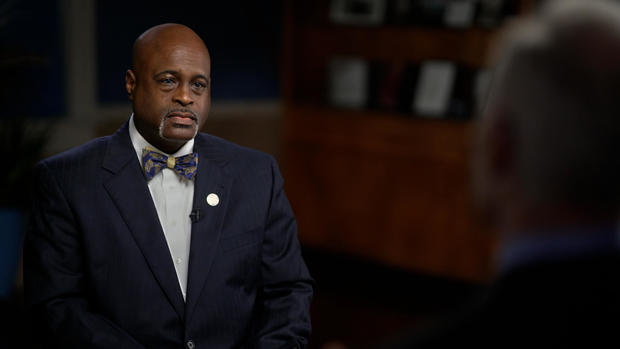 Zebbie Atkinson: I'm sure that, when they purchased that property, they didn't know that there were bodies there.

Scott Pelley: What would you say to someone who might make the argument that that disturbing Missouri Avenue, disturbing the FrankCrum corporation, disturbing the schools, way too much effort at this point in time?

Zebbie Atkinson: I would say that that's not their call. They have no family buried there.

Atkinson is helping lead the conversation of what to do now among descendants, businesses and the city.

Zebbie Atkinson: Some people want to have the bodies moved to a place where they can properly memorialize them. Some of the descendant community wants to let the people stay where they are. Those are the type of things that need to be worked out.

Scott Pelley: How do you work 'em out?

Zebbie Atkinson: We have to sit and talk about it. I mean there is no easy answer with that.

Whether the failure, in the last century, to move the graves was deceit, incompetence, or indifference — we do not know. But today, Clearwater is spending $270,000 to learn the truth. The city told us it is searching for a compromise that will honor the dead. The FrankCrum Company told us it wants to be part of the community's solution. Ideas include monuments. But for a few, like O'Neal Larkin, there's only one route to justice.

O'Neal Larkin: Tear it down.

Scott Pelley: Tear the building down?

O'Neal Larkin: Tear it down. Tear down that building, as far as I'm concerned. Tear the school down. Make it a shrine of memories so that people can go and use it in a proper way of remembering. To treat 'em with more dignity than what this has been treated.

We noticed dignity was treated gently in the White cemeteries of Clearwater. In one, we found a monument to a Confederate soldier. His grave decorated today with a fresh banner of racism. But when this Confederate sacred ground found itself blocking the road to progress, the small cemetery, under trees in the middle, was granted a reverent, circular, detour. 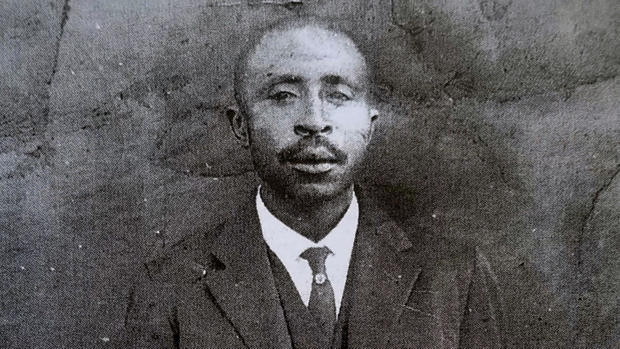 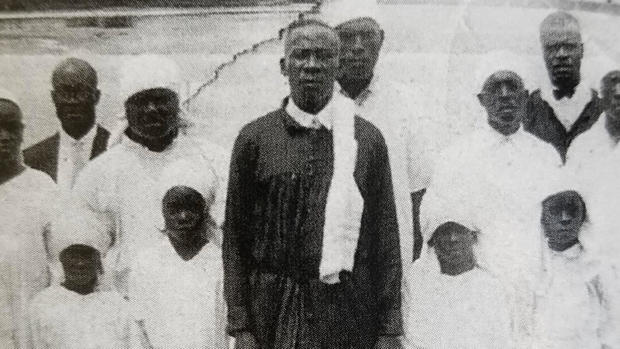 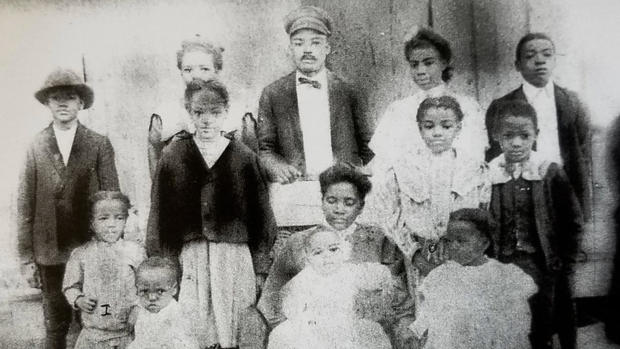 Of those citizens buried in the Black cemeteries of Clearwater, we have images of only these: the Reverend Arthur L. Jackson, the Reverend Joseph Hines and Mack Dixon Sr., who was buried beside his wife, Florence, three children and two grandchildren. We do not know the faces of 500 more who remain forever bound by segregation and lost to the memory of time.