It sounds like the Mets will have Francisco Alvarez in the dugout when the playoffs begin, whether he’s part of the bench or not.

MLB’s top-ranked prospect finished the regular season Wednesday by making his first career start at catcher and drawing two walks in four plate appearances as the Mets beat the Washington Nationals, 9-2. It was an important encore to his first two career hits — including a 439-foot home run — in the second-to-last game.

“I thought he was good and quiet,” Showalter said of Alvarez’s first extensive work behind the plate. “One of those things when you don’t notice a guy. … I was proud of him. He caught the ball well and presented it well [to the umpire].”

The Mets have until noon Friday to finalize their 26-man playoff roster for the wild-card round against the San Diego Padres. If included, Alvarez, who made his MLB debut last week when the Mets were swept by the Atlanta Braves in a pressure-packed series, could provide a power bat off the bench. No. 3 catcher insurance also allows for in-game maneuvering and guards against injury to Tomas Nido and James McCann.

“He’s under consideration,” Showalter said. “We’re lucky to have good options. He’s one of them.” 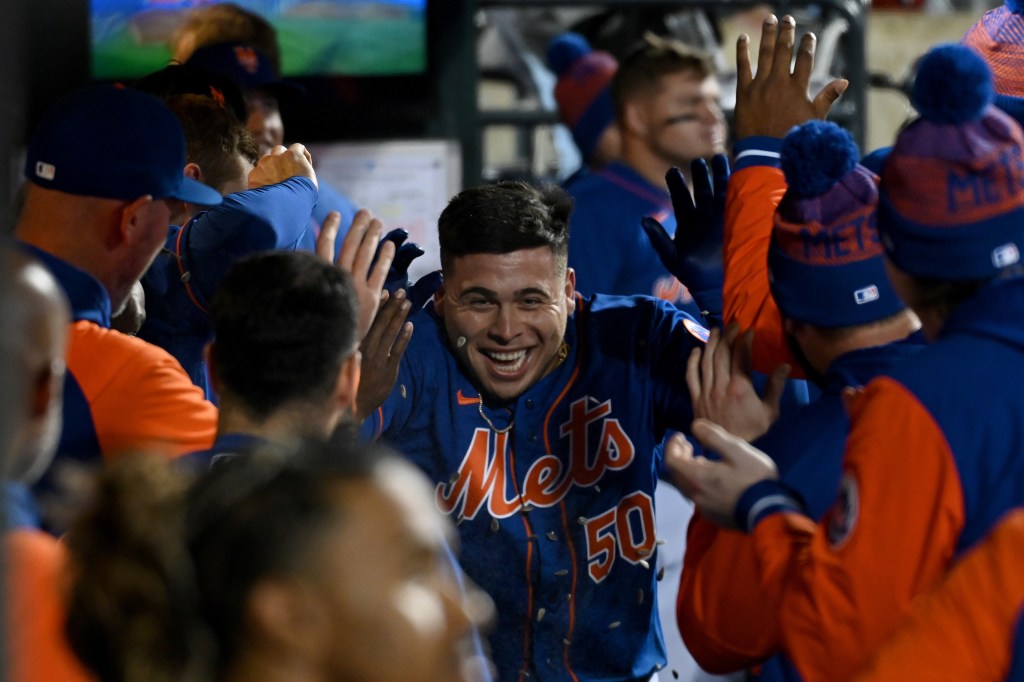 As manager of the Yankees in 1995, Showalter kept top prospect Derek Jeter around the team even though he wasn’t eligible to play so he could soak in the atmosphere of a playoff series against the Seattle Mariners. That turned out OK. Would Alvarez be afforded the same benefit if he doesn’t make the cut?

“He’s a big strong young man. I’m not going to tell him any differently,” Showalter said. “I would think that’s a possibility, if it’s legal to do it.”

MLB rules allow teams to have a reasonable number of non-roster players in the dugout throughout the postseason.

“He’s a very serious guy,” Showalter said. “You can tell players are drawn to him.”

With all the attention on the playoffs, Alvarez’s development sparked a premature thought in Showalter’s head. He doesn’t want Alvarez to miss any part of Mets spring training to join Team Venezuela in the World Baseball Classic in March 2023.

“Who’s the catcher for Venezuela in the WBC?” Showalter said. “I can tell you who it won’t be. He needs to be in St. Lucie.”

Before then, Alvarez might get a chance to help the Mets in a big October moment, like so many other late-season call-ups turned postseason X factors have during teams’ deep playoff runs.

Mets pitcher Trevor Williams said he and Alvarez had a “great first date” throwing in the bullpen Tuesday and were “on the same page relatively” during Williams’ six innings Wednesday.

“He’s been putting in the work behind the scenes catching a lot of bullpens this year for guys,” Williams said. “If he has to come in in a pinch, he’s going to be more than ready. For him to have success with the homer and the double and get the start for us today was huge.”

India’s Richest Man Is Buying a Major TV Channel. It’s a Blow to Independent Media in the Country