Wink Martindale won’t be getting a pet snake anytime soon.

The Giants defensive coordinator doesn’t trust them. Just like he doesn’t trust any numbers — like a career-low 7.2 yards per completion — that suggest Packers quarterback Aaron Rodgers is any less dangerous than ever in his first season without favorite target Davante Adams.

“It’s like owning a python and saying, ‘Don’t worry about it, he won’t bite,’ ” Martindale said. “Aaron Rodgers is Aaron Rodgers. To me, there’s no difference. I think that he’s just as effective today as he was 5-6 years ago. He’s playing at a top level.”

Rodgers has the lowest interception rate (1.3 percent) and seventh-highest touchdown rate (6.3 percent) all time among quarterbacks with a minimum of 1,500 career attempts. But the Packers’ path to a 3-1 start includes surviving an uncharacteristically high seven turnovers and the No. 21-ranked scoring offense (18.8 points per game). 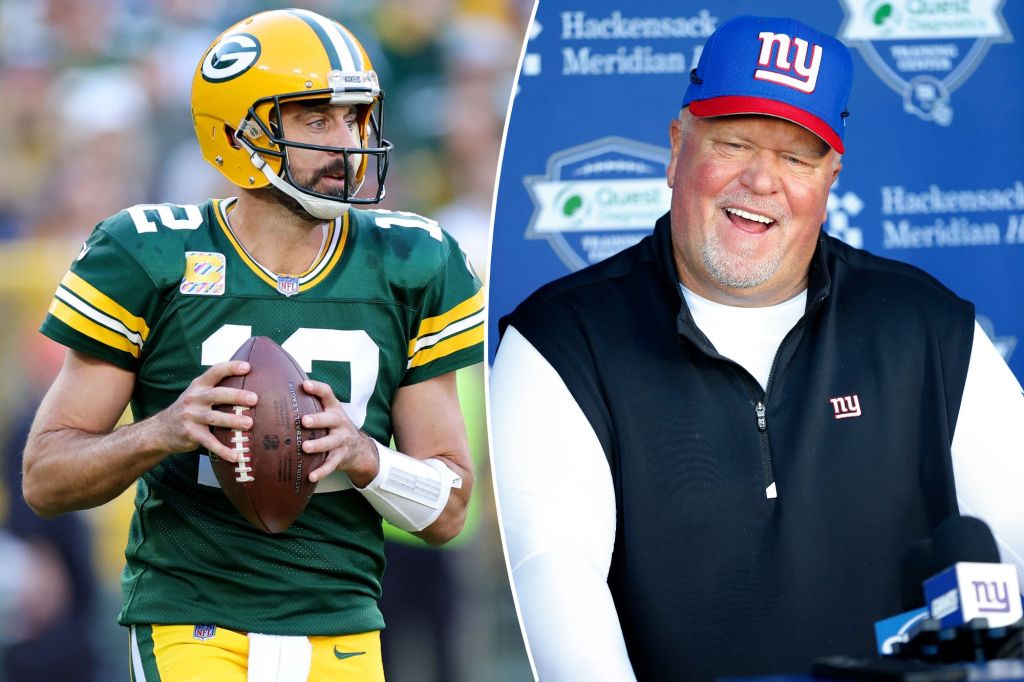 In the aftermath of trading Adams, Rodgers is throwing to rookies Romeo Doubs and Christian Watson, newcomer Sammy Watkins, Allen Lazard and one old reliable Randall Cobb. He called out the young receivers for too many drops during training camp — and the response is a group ranked No. 2 in the NFL in yards after catch.

“I’ve been hearing about [Rodgers and the Packers] since I was a Lil Wayne fan as a kid,” slot cornerback Darnay Holmes said, referencing the rapper and Packers superfan. “Going against the guys that they have is something that you look forward to. The receivers are crafty technicians.”

No, the Giants are not buying anything about a struggling Packers offense as long as Rodgers is throwing the ball.

“It’s really hard to get a read on him,” safety Xavier McKinney said. “Obviously he has seen everything in the game. That always makes it hard when you play against Hall of Fame guys. You have to stay true to you and try to make some plays.”

If the Giants stay too true to Martindale’s identity, it could be a mismatch. They lead the NFL by blitzing on 45.3 percent of defensive snaps but Rodgers is a notorious blitz-beater, with 52 touchdowns and six interceptions when facing five or more rushers since 2018.

When the Buccaneers blitzed him on 41.7 percent of his dropbacks in Week 2, he took six hits, completed 77.1 percent of his passes and had a 103.9 quarterback rating. In the first three games of the season, Rodgers threw an on-target pass on 100 percent of the snaps he was blitzed (instead of a sack, a scramble, a throw-away or broken-up pass), according to Pro Football Focus.

“We’ve played him different about every time we’ve played him,” Martindale said, referring to his three matchups against Rodgers when he was an assistant coach for the Ravens. “The way to attack him changes from year-to-year [with] who he has with him. The thing that separates him … is just the great football mind that he has. He gets them in the right run game, he gets protections right, he knows the pressures are coming.”

If that wasn’t enough of a challenge, Rodgers has the unique skill of a hard count known for drawing players offsides and getting free plays.

“Every week we practice hard counts and the signs of when it may come, but he’s one of the best at it,” defensive tackle Dexter Lawrence said. “It’s just being disciplined and watching the ball and listening to some of the things that give you a tell.”

Former Giants safety Logan Ryan always looked at his job as a one-on-one against the quarterback. McKinney doesn’t quite see it that way now because it would be a lot to put on one young player in the remade secondary.

“We work as a unit, and collectively we’ll be trying to mess with his head a little bit,” McKinney said. “We have a lot of smart playmakers who can play in different places without having mental errors and disguise things. That’s been our strongest suit.”

When the strength-on-strength chess match is over, Martindale might meet the “pain in the butt” Rodgers somewhere else down the line to get the last laugh.

“When I’m retired on a golf cart someplace down in Florida hitting a golf ball,” Martindale quipped, “I hope he’s in the foursome in front of me. And I’ll hit a golf ball into him.”