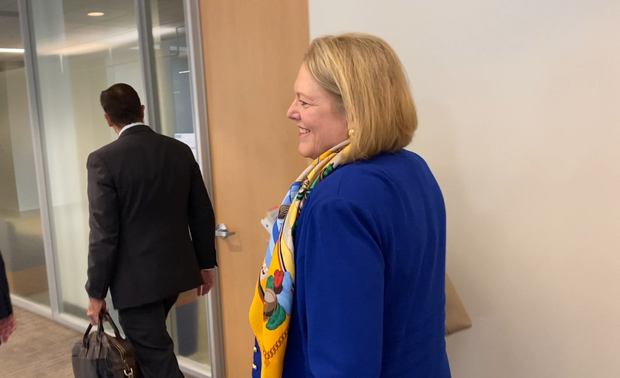 Conservative activist Ginni Thomas arrives at Capitol, where she is to be interviewed by House select Jan. 6 committee, Sept. 29, 2022. Screen grab from pool video

Thomas was spotted by reporters arriving at a House office where the panel's investigators have been gathering throughout their probe and told those assembled, "Thank you for being here."

NEW: Ginni Thomas walked into her interview with the January 6 Cmte she did not respond to questions when asked why she felt like she attended the hearing and whether she had spoken to her husband about clearing her name. pic.twitter.com/OjPwtMl8tc

Asked whether she had spoken with her husband about her belief that the 2020 election was stolen, Thomas replied, "Thank you for your question. I look forward to answering members' questions."

Rep. Bennie Thompson, the chair of the House select committee, said Wednesday that Thomas would be speaking with the panel this week, but did not reveal which day.

The committee asked Thomas to appear voluntarily before the panel after it learned that she had corresponded with John Eastman, a conservative lawyer who helped come up with the legal strategy to pressure former Vice President Mike Pence to unilaterally toss out state electoral votes.

Thomas also sent emails to at least two Wisconsin Republican legislators days after the presidential election, pushing them to name an alternate slate of presidential electors to back former President Donald Trump. And Thomas corresponded via text message with Trump White House chief of staff Mark Meadows in the days following the 2020 election, urging him to overturn the election results.

Thomas' lawyer, Mark Paoletta confirmed about a week ago that she would participate in a "voluntary meeting" with the committee, saying in a statement that Thomas was "eager to answer the Committee's questions to clear up any misconceptions about her work relating to the 2020 election."

The select committee was scheduled to hold a hearing a day ago, on Wednesday, but postponed, due to Hurricane Ian. A new date has not yet been set, according to Thompson, and the House is expected to go into recess at the end of the week.

Thompson said earlier this month that the committee plans to put together an interim report in mid-October, and will finalize the report before the end of the year, after the November midterm elections. The committee's two Republicans, Liz Cheney and Adam Kinzinger, are both leaving Congress in January. Cheney lost her primary in Wyoming to a Trump-backed challenger, and Kinzinger opted not to run for reelection. Another member, Democratic Rep. Elaine Luria, is facing a tough reelection battle against Republican state Sen. Jen Kiggans.

Zak Hudak and Melissa Quinn contributed to this report.

Assault On The U.S. Capitol