At the annual Food Tech Israel conference held in Tel Aviv on Nov. 7, exhibitioners offered samples of hydroponically-grown vanilla, reduced-sugar sugar, protein bars with all the benefits of breast milk, and a kind of modified pond scum with the texture of caviar and a whiff of wheatgrass—the taste of a futuristic food-scape. But by far the biggest lines could be found in front of the stands offering up more traditional expo fare: lamb kebabs, pulled beef pitas and burger sliders. Those with invitations to private tastings dined on steaks, roast beef with potatoes, chicken sausages, and triangles of gooey grilled cheese sandwiches. It was enough to make even the most committed carnivore crave a salad.

But it was a scene even a vegan would enjoy. The cheese was produced from microalgae, and the roast beef—as succulent and savory as the real thing—was made from fermented plant proteins. The kebabs, burgers, and pulled beef were plant based; the chicken and steak, served offsite by SuperMeat and Aleph Farms respectively, were cultivated from biopsied stem cells in bioreactors. About the only animal-based product to be found at the venue was a lonely quart of cow’s milk tucked behind a phalanx of plant-based alternatives at the coffee stand.

The future of Israeli food technology, it would seem, does not include animals. Israel is second only to the United States in terms of start-ups and investments when it comes to alternative protein companies, receiving nearly $1 billion from investors since 2020. A country that boasts the highest per-capita consumption of poultry, the fourth-highest consumption of red meat, and yet is still home to the world’s highest percentage of vegans, Israel is well situated for incubating a new meat revolution with world-wide ambitions. Three of the first eight cultivated meat companies in the world started in Israel, and all three—Aleph Farms, Super Meat and Believer Meats, along with Nasdaq-listed newcomer Steakholder Foods—are poised for international distribution once local food regulators authorize sales of lab-grown meat.

Read more: Lab Grown Chicken Gets a Green Light From the FDA

Given its history as a politically isolated state in a water-poor region, Israel has long been forced to innovate when it comes to its food sector. Between advances in water desalination, greenhouse construction, precision irrigation, and hydroponics, the country has grown into an ag-tech powerhouse. But it is still not self-sufficient in food. Israel’s poultry and dairy industries supply more than 90% of domestic demand, yet they rely on imported grain that must come in overseas—the borders with Lebanon and Syria are closed by ongoing conflict, and trade with neighbors Jordan and Egypt is nearly non-existent due to political tensions over its illegal annexation of Palestinian territories in the West Bank.

Meanwhile, a growing population—both in Israel, and in the Palestinian West Bank— is driving up real-estate prices and cutting into arable land. Water shortages caused by climate change are making irrigation of new crops less predictable and more costly. “Land here is scarce, and water is expensive. This is why we must focus on innovation,” says Didier Toubia, the CEO and co-founder of Aleph Farms. According to the Good Food Institute (GFI), an international advocacy and research institution that promotes alternative protein technologies, cultivated meat—grown from stem cells in a bioreactor—reduces water use by up to 78% and cuts land requirements by up to 95%, compared to conventional beef farming.

Acutely aware of the limits of conventional animal agriculture, the Israeli government is promoting alternative proteins as an economic growth engine, a technology to mitigate the climate crisis, and as a food security asset. Prime Minister Benjamin Netanyahu was the world’s first head of government to taste cultivated meat in public, sampling Aleph Farms steak on Dec. 7, 2020. “It’s delicious and guilt-free, I can’t taste the difference,” he said, pledging that “Israel will become a powerhouse for alternative meat and alternative protein.” President Isaac Herzog tried cultivated chicken nearly a year later, becoming the first, and so far, only president to do so. In April this year, the Israel Innovation Authority funneled $18 million into a newly formed cultivated meat consortium made up of 14 Israeli companies and 10 academic labs working together to bring down costs and scale up production. And in September, the government declared “food tech, with an emphasis on alternative proteins” as one of five national R&D priorities. 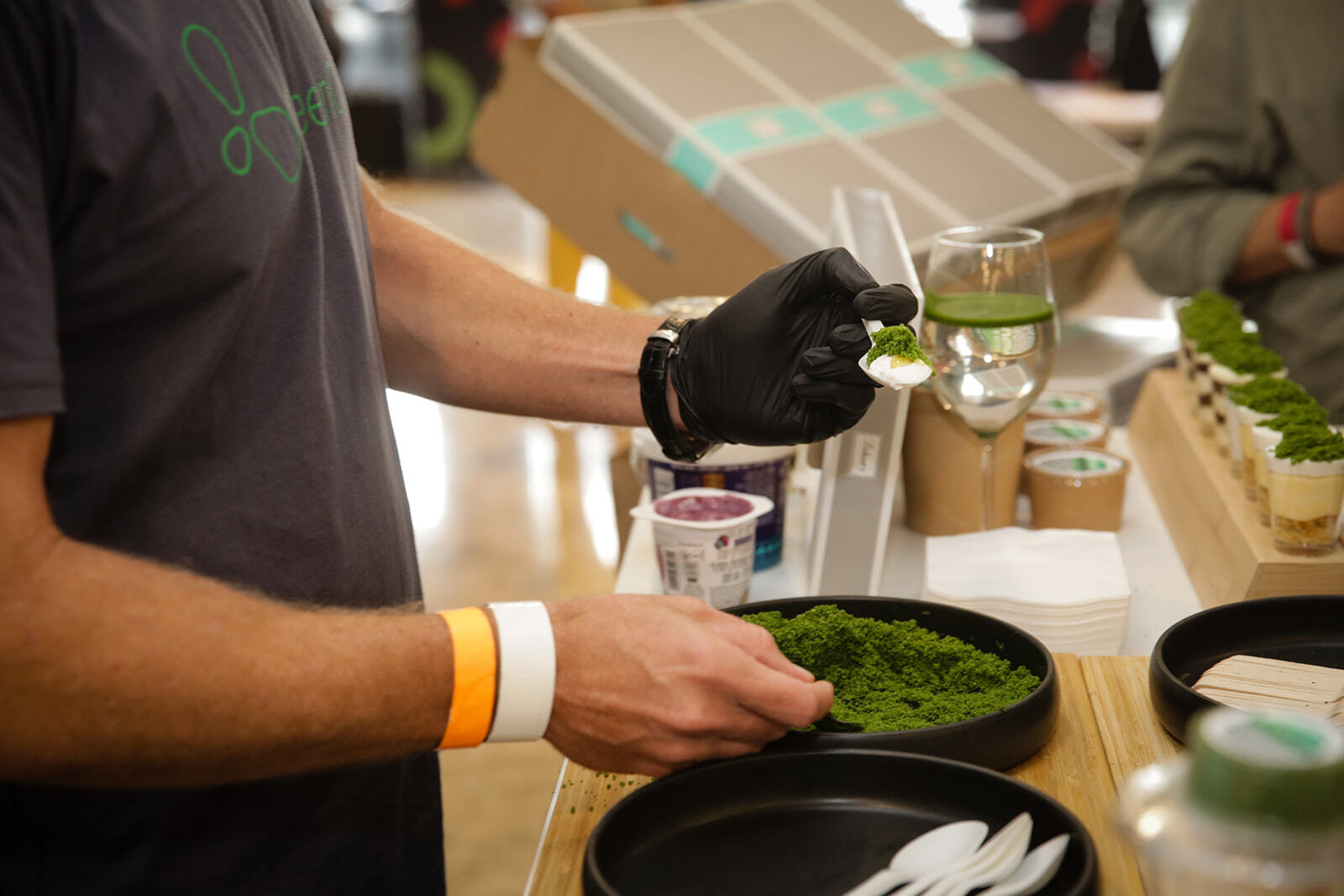 A pond-scum (duckweed)-based caviar made by GreenOnyx, shown at the FoodTech IL 2022 conference.

In terms of government support for the nascent industry, Israel is rivaled only by Singapore, which was the first country to allow the sale of cultivated chicken produced by American start-up GOOD Meat (then known as Eat Just) in December 2020. But Singapore trails behind Israel when it comes to scientific research and development, says Nir Goldstein, managing director of GFI Israel. Part of Israel’s progress is due to the looming sense of urgency—”we understand that the Israeli contribution to the climate change battle can be in protein innovation,” he says, but a lot of the sector’s success comes down to sheer chutzpah, according to founders of several alt-protein companies. “We grow up in challenge and conflict, so the Israeli mindset is all about solving problems. That leads to innovation,” says Arik Kaufman, the CEO of Steakholder Foods. He just wishes that Israel would follow Singapore’s lead and push for regulatory approval of commercial sales. He has no doubt that cultivated meat would do well in Israel.

According to a 2017 survey, the most recent available, 5% of Israelis are vegan, 8% are vegetarian, and another 23% said that they wanted to reduce meat consumption. Even the Israeli army supplies vegan meals, leatherless boots, and wool-free berets for its recruits. And while cultivated meat, which is real meat minus the slaughter, may not tempt those who have sworn off animal products entirely, it is likely to appeal to a population already attuned to the waste, climate impacts, and inhumane treatment of industrial animal farming. Jewish laws regarding Kosher meat slaughter, as well as prohibitions against mixing meat and milk, keep consumers mindful of where their food comes from, even if they aren’t particularly religious, says Yonatan Golan, the CEO of Brevel, which makes a plant-based cheese using microalgae. “In Judaism, you have to wait several hours between eating milk and meat, so you have to be innovative with your dessert. Or you might want to innovate with your dinner because you do want to eat that creamy dessert. It creates a whole ecosystem of innovation, and an openness to trying new things.”

Whether or not a cultivated meat burger served with plant-based cheese would pass Judaism’s strictest food laws remains to be seen. But focusing on climate-friendly foods that avoid animal suffering follows another tenet of Judaism, says Yoav Reisler, senior manager for marketing at Aleph Farms. He uses the phrase Tikkun Olam, Hebrew for “repairing the world,” that is often used in reference to social actions. “Cultured meat is one of the solutions to correct the world for a better purpose.”