Here’s POLITICO’s look at the most notable aspects of Monday’s arguments:

Politics weren’t checked at the door

Officially, the case pits a religious businessperson against the state’s desire to protect LGBTQ people, but the arguments before the justices Monday seemed to come back again and again to that subject that infects so many Washington conversations: politics.

On at least five occasions, lawyers sought to compare or contrast the designer’s predicament with a political partisan being forced to take up arms — or at least wield a pen — for the opposition.

“Under Colorado’s theory, jurisdictions could force a Democrat publicist to write a Republican’s press release,” Smith’s attorney, Kristen Waggoner, said. “No one should be compelled to speak a message.”

LGBTQ rights advocates contend Smith’s refusal to design a website for a same-sex wedding is discrimination because the site could be the same speech in all significant respects as one for an opposite-sex couple. 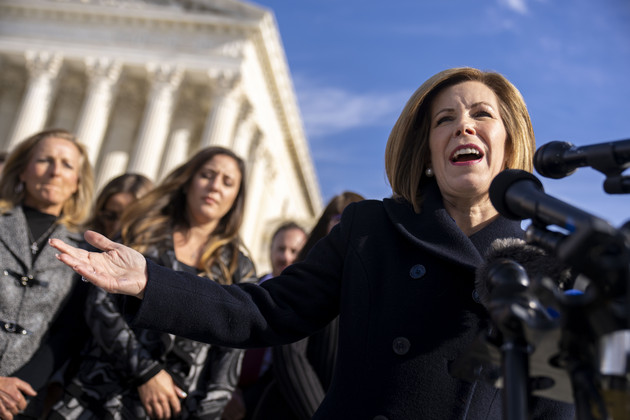 Waggoner disagreed, contending that the designer should be free to choose which clients to provide or not provide the service for. The lawyer seized on another political example to argue that a singer or musician shouldn’t be forced to put on a more-or-less identical performance if he or she doesn’t agree with the message the audience might take away.

“If that artist were being asked to perform that song in a live way, for example, sang at a Democratic inauguration and they were asked to perform at the Republican one, under Colorado’s theory, they could be compelled to do so in a number of jurisdictions,” Waggoner said.

The Supreme Court may have lost its king of arcane hypotheticals with the resignation of Justice Stephen Breyer last term, but the justices more than made up for his absence Monday.

The dizzying series of invented scenarios, layered with modifications by other justices, seemed to spin out of control on several occasions.

Justice Ketanji Brown Jackson, who took Breyer’s seat, conceived of a mall photographer with racist tendencies who was eager to photograph white children on Santa’s lap but not those of other races.

“This business wants to express its own view of nostalgia about Christmases past by reproducing classic 1940s and 1950s Santa scenes,” Jackson said.

Waggoner gave a confusing answer about whether such conduct would be protected by the argument she is making. “This Court has protected vile, awful, reprehensible, violent speech in the past. ... That may be an edge case, but this is not,” she insisted.

Justice Samuel Alito later picked up on the mall Santa scenario, inadvertently going viral with a bizarre hypothetical involving an African-American St. Nick and the KKK.

“If there’s a Black Santa at the other end of the mall and he doesn’t want to have his picture taken with a child who’s dressed up in a Ku Klux Klan outfit, that Black Santa has to do that?” Alito asked.

Colorado Solicitor General Eric Olson said the Black Santa wouldn’t have to, because he’s under no obligation to accept children in any particular outfits for photos.

Justice Elena Kagan chimed in to say that the photographer choosing outfits would be acceptable under Colorado law, but refusing to serve someone based on his or her race would be a different matter. “That would be the same Ku Klux Klan outfit regardless whether the child was black or white or any other characteristic,” she said.

Alito said part of that hypothetical struck him as too remote to be of much concern.

“You do see a lot of black children in Ku Klux Klan outfits, right? … All the time,” he joked.

Is this test case not ready for prime time?

Part of what sent the justices running to hypotheticals is that the case in front of them is rather sterile. Smith hasn’t actually refused service to any same-sex couple. In fact, she’s never designed a wedding website for anyone. The entire dispute is based on her stated intention to broaden her business to offer sites for impending nuptials and her fear that the state of Colorado will take action against her if she does so while publicly excluding same-sex couples.

After Smith filed suit to head off such action, both sides in the case agreed on certain facts, including a mock-up of a website she planned to offer. Notwithstanding the fact that she says she intends to make a custom site for each couple.

Some justices found the factual foundation for the case unsatisfying, because Smith’s lawyers acknowledge that she could not legally deny same-sex couples a plug-and-play website, so precisely what message she would be conveying in a custom one not yet designed is unclear. 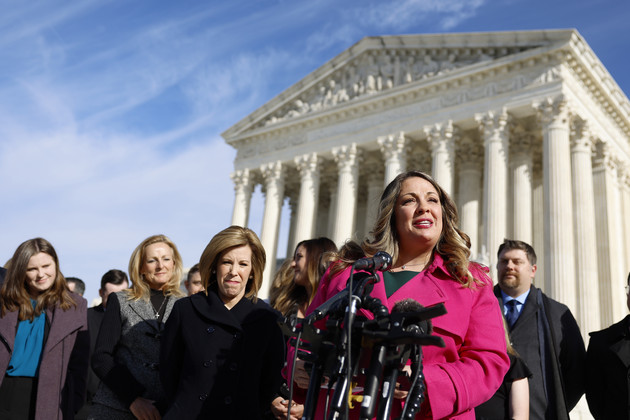 Lorie Smith, the owner a website design company in Colorado, speaks to reporters outside of the U.S. Supreme Court building on Dec. 5, 2022. | Anna Moneymaker/Getty Images

Such concerns may have prompted the very first question of the arguments Monday, when Justice Clarence Thomas asked Waggoner: “Whether or not this, your case, is ripe?”

Smith’s lawyer unsurprisingly said it was, but Kagan said the precise message the state would be forcing Smith to convey was important but remained murky in the case’s current posture.

“It really depends on the facts and on what exactly Ms. Smith is being asked or compelled to do — and that matters,” Kagan said.

Deputy Solicitor General Brian Fletcher urged the court to turn down the case on that basis, but leave the door open to Smith or someone else to return to the court after being the victim of some kind of enforcement action based on specific words and messages.

“I think the court can take that claim as she presents it and say on that level of generality she is not entitled to pre-enforcement relief … [but] we are not foreclosing the possibility that there is narrow relief in future cases with concrete facts,” Fletcher said.

Sometimes justices are invested in particular cases that surface during oral arguments because they authored the majority opinion or dissented from it. But only rarely do the cases that come up in the Supreme Court’s rarified courtroom involve the justices themselves.

Kagan found herself in that unusual position Monday after Chief Justice John Roberts said he saw little similarity between the web designer’s case and a unanimous 2006 ruling where the high court rejected law schools’ claims that a federal law forcing them to accommodate military recruiters violated the schools’ free-speech rights. The schools contended that they shouldn’t have to allow the recruiters in because, at the time, the military barred gay men and lesbians from serving.

Roberts said the only thing the government compelled in the law schools’ case was access to “empty rooms.” Kagan, who was dean of Harvard Law School at that time and helped lead the charge against the policy, looked askance at the reference but left it to Fletcher to handle most of the push-back.

“That’s not correct,” the Justice Department attorney said in an unusually blunt rebuttal from an arguing attorney. Fletcher noted that the schools were also compelled to give military recruiters access to emails, newsletters and other notices — all forms of speech — on par with that afforded to other employers recruiting on campus. “The law schools also had sincere moral objections to making those statements to facilitate recruiting that they found deeply objectionable,” he said.

Kagan chimed in later, suggesting that under the court’s precedent, telling invitees where a wedding is going to be held isn’t much different than telling students where the military folks are coming on campus — speech the court ruled could be compelled in the 2006 case.

Arguments can also provide an opportunity for justices to learn a thing or two and maybe venture outside their comfort zone, but only so far.

Justice Samuel Alito raised a hypothetical Monday about objections to intermarriage among Jewish people and whether that would be a sufficient basis for a website not to accept business from a couple of mixed religious backgrounds. Olson said it would not, but that the website wouldn’t have to change any messages against intermarriage to satisfy the state’s laws.

Alito then launched into another example about an unmarried customer asking a photographer to take a photo to be featured on Jdate.com.

“It is,” Kagan replied, prompting laughter from the courtroom.

“Maybe Justice Kagan will also be familiar with the next website I’m going to mention,” Alito continued, raising the example of a Jewish photographer being asked to take a photo for someone’s profile on Ashleymadison.com — a site that openly caters to relationships that involve financial support.

That prompted more uproarious laughter from the courtroom, even as Alito gamely backpedaled about his intimation that Kagan would have insights on the topic. “I’m not suggesting that. I mean, she knows a lot of things,” he said.