No pain no gain.

A fitness influencer has gone viral for smashing his face open with a heavy workout plate while trying to film a stunt with a woman in a gym.

Bradley Martyn got 17.2M views on TikTok for the clip of his muscle-headed mishap — in which he attempted to bench press a female gym partner on the weighty round “bumper” plate, but it slipped and smacked him right in the kisser.

“Two things I did wrong here. Have her spin around and use a bumper plate,” he explained in a subsequent YouTube video called “I BROKE MY FACE,” which went up after his TikTok was deleted.

The painful power lifting fail began with the muscular Martyn lying on his back on a gym bench while holding the heavy round plate in his hand as if he were about to bench press it.

A woman then steps on top of the weight, shakily trying to maintain her balance on the small rubber disk as Martyn start doing reps lifting her up.

A few seconds into the stunt, as the woman squats down, Martyn loses his grip of the bumper plate and the heavy piece of gym equipment slams right into his face.

It looks at first as if the gym rat’s skull could be crushed. But fortunately Martyn only winds up needing 10 stitches after a trip to the hospital.

Martyn posted the original video on TikTok on September 22 captioned: “POV: DROPPING UR PHONE ON YOUR FACE.”

He has since posted several other viral videos of different angles of the shot and a clip of him successfully executing the stunt. 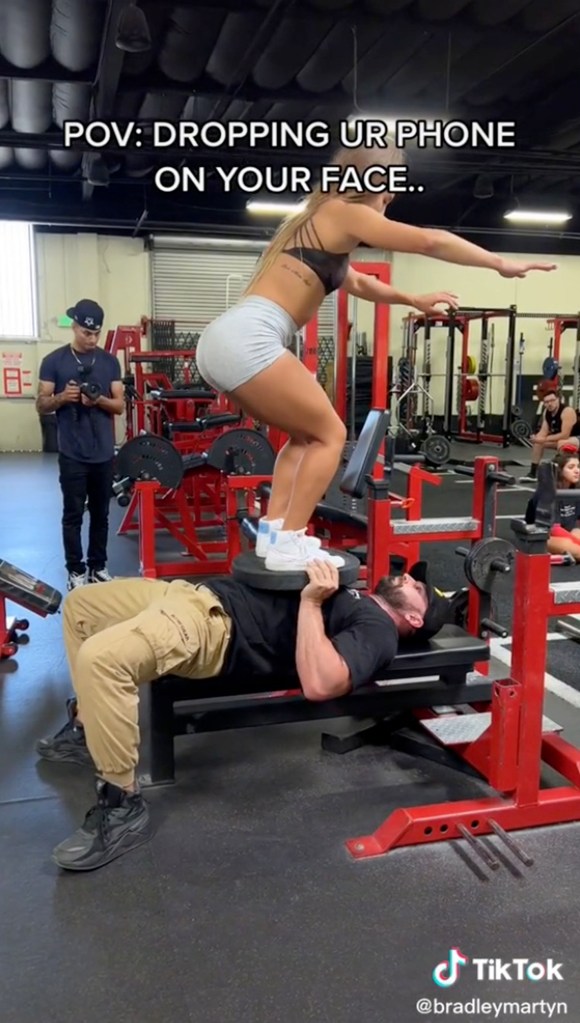 Defending his thought process before the painful failed attempt on YouTube, Martyn said, “I tried to lift a girl. Now, I’ve done this before where a girl sat down on a plate and I pressed her. But, someone was like, ‘Why don’t you have her stand up?’ and I was like yeah, that’s cool, that’s easy.”

The trainer explained that using a bumper plate was also a “mistake” because they’re harder to balance on.

Martyn’s social media accounts are filled with wild workouts and other fitness-related content, but viewers might not want to try this one at home.