Hurricane Ian destroyed a major chunk of the Sanibel Causeway when it slammed into Florida's west coast Wednesday, cutting off access to the barrier island where 6,400 people normally live. Both Sanibel and Captiva islands have been cut off from the mainland after the storm washed away at least three sections of the bridge, CBS Miami reported.

Videos from the causeway show two portions of the ramp to both bridges washed away, as well as a stretch of roadway that crossed an island in the middle of the causeway. The causeway is the only way for vehicles to enter or leave the islands. 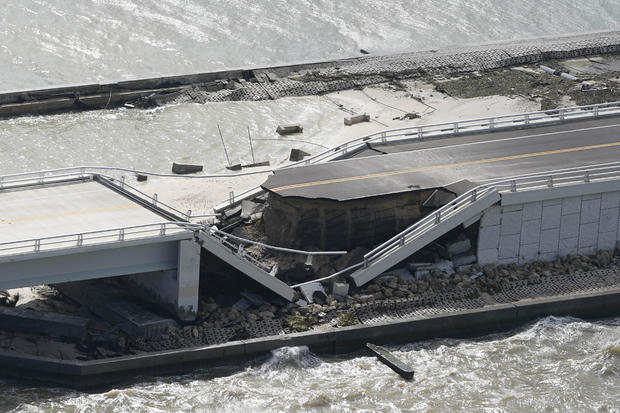 A section of the damaged Sanibel Causeway seen in the aftermath of Hurricane Ian, Thursday, Sept. 29, 2022, near Sanibel Island, Fla. Wilfredo Lee / AP

All lanes of the bridge are currently closed and the severity of the closure is listed as "major," according to Florida officials.

The islands are home to a number of hotels and resorts, and their beaches draw a significant number of tourists each year.

It was unknown how many people on the islands had heeded orders to evacuate, but Charlotte County Emergency Management Director Patrick Fuller expressed cautious optimism that worst-case scenarios might not have been realized.

No deaths or injuries have been confirmed in the county, and flyovers of barrier islands show "the integrity of the homes is far better than we anticipated," Fuller said.

A 2017 City of Sanibel count measured annual bridge traffic over the causeway at over 3 million vehicles.

South of Sanibel Island, the historic beachfront pier in Naples got destroyed, with even the pilings underneath torn out, as towering waves crashed over the structure. "Right now, there is no pier," said Penny Taylor, a Collier County commissioner.

Meanwhile, a hurricane warning has been issued for South Carolina's entire coast as Ian, which is now a tropical storm, is expected to regain strength and become a hurricane again on Thursday evening.