Vinnytsia, Ukraine — Russia's invading forces have left Kherson, but they're still raining terror down on the southern Ukrainian city's people.

"I hate the Russians," said Lilia, after finding her mother's body. Natasha was killed just a few steps from the safety of her home by a Russian missile strike. Lilia's father died hours later, too, but she's not alone.

"They took the most precious people in my life, but I have a son," she said. "For him I must live."

Survivors of Russia's unending volley of rocket fire are left in the cold and the dark, because many of Vladimir Putin's missiles have been aimed at Ukraine's power grid.

The Russian military is using winter as a weapon. With electricity cut, millions of families were unable to cook meals on Saturday as Ukraine commemorated the Great Famine of the 1930s, when the Soviet Union intentionally starved millions of Ukrainians to death.

"We cannot be broken," President Volodymyr Zelenskyy declared in an address to his nation, honoring those killed by Joseph Stalin then — and Vladimir Putin now. "Once they wanted to destroy us with hunger, now, with darkness and cold." 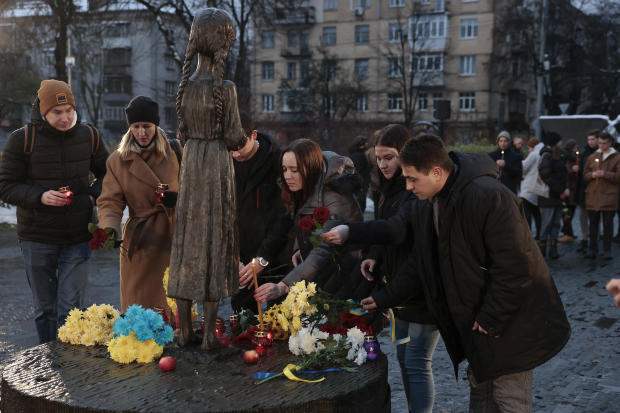 People pray, lay flowers and light candles at Holodomor Genocide Museum, which commemorates the "Terror-Famine" or Great Famine, a man-made famine in Soviet Ukraine from 1932 to 1933 that killed millions of Ukrainian, on November 26, 2022 in Kyiv, Ukraine. Jeff J Mitchell/Getty

Even in the capital Kyiv, the electricity supply is unreliable. Locals have found shelter anywhere they can, including in tents. Inside one of them, we found Constantin, a videogame designer.

"We should live, we should stay, we should fight," he told CBS News. "This is the only way of how we can actually win this war… Even if we have to sleep in a tent."

Even in the dire circumstances, there are reasons for Ukrainians to have hope — more signs that Russian forces are taking a beating.

Find out more about the UK government's response: https://t.co/htZ2ZsfvmF

The latest British intelligence assessment of the war says Putin's army is running so short on weapons and other supplies, that it appears to be resorting to firing cruise missiles from the 1980s that have been stripped of their nuclear warheads.

While such missiles "will still produce some damage" just with their impact any unused fuel they slam down still carrying, the U.K. said they were "unlikely to achieve reliable effects against intended targets."

"Whatever Russia's intent, this improvisation highlights the level of depletion in Russia's stock of long-range missiles," according to the British assessment.

Chris Livesay is a CBS News foreign correspondent based in Rome.