One draft pick away from greatness. As NBA marketing campaigns go, you could do better. Much better.

But for the Knicks, that slogan might be the most accurate option on the board. You already know the story about the 2009 draft, with no happy ending in sight.

The Knicks held the eighth-overall pick back then, and after eight straight seasons without winning a single playoff game, they thought they were about to finally hit pay dirt. They were salivating over a rail-thin wonder from Davidson College, Steph Curry, who always looked like he was wearing a uniform he pulled from his old man’s closet. Dell Curry once led the league in 3-point shooting percentage, but his son was something else.

So as desperate, amateur-hour recruiters, the Knicks made no attempt to hide their desire to select Curry at No. 8. Team president Donnie Walsh and friends all but hung a banner outside the Garden announcing their pre-draft intentions, and behind the scenes Dell Curry and his son’s agent, Jeff Austin, were pleading with the loserville operation that was holding the seventh-overall pick — the Golden State Warriors — to let the prospect fall into Walsh’s hands.

“When I got drafted,” Steph Curry would say years later, “I thought I was going to New York, and didn’t really have Golden State on the radar at all.”

Everyone knows how it played out from there. Warriors general manager Larry Riley ignored Curry’s preference to play in Mike D’Antoni’s high-speed offense in the big city and took the best player on his board. The Knicks selected Jordan Hill, who would appear in 24 games for them and average 7.9 points across his journeyman career, instead of DeMar DeRozan, a five-time All-Star who is now averaging more than 26 points per game for Chicago. 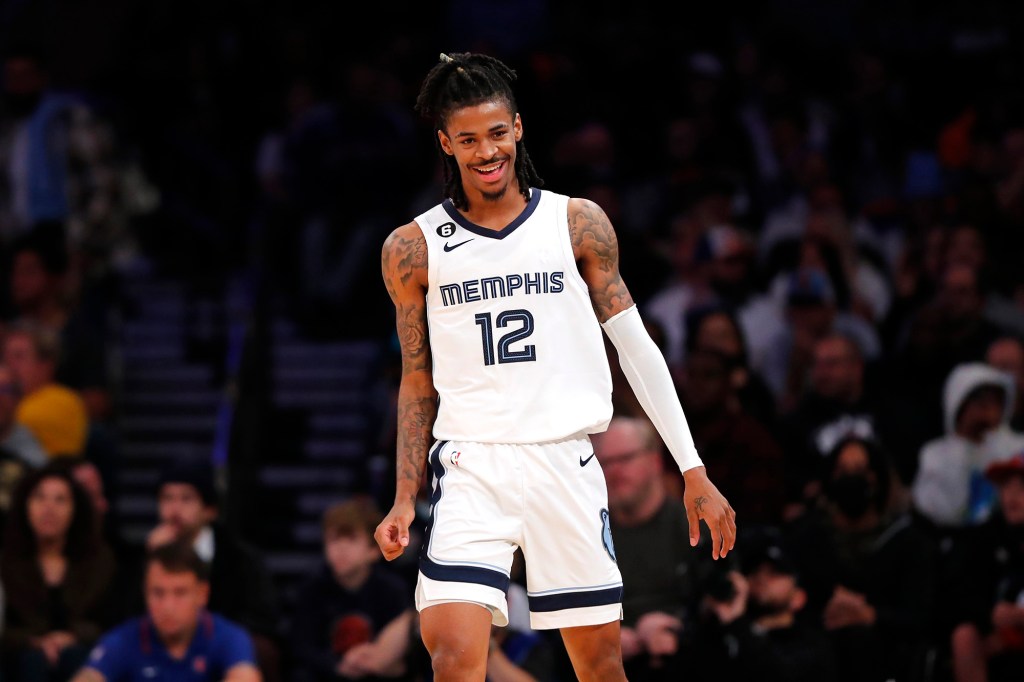 Curry became a four-time champion and the greatest NBA shooter of all time by Secretariat lengths. On cue, Curry broke Ray Allen’s career 3-pointers record against the Knicks, in the Garden. The same building that welcomed the Grizzlies’ otherworldly Ja Morant on Sunday night.

The same Ja Morant who was one draft pick away from the Knicks in 2019.

This time around, Morant didn’t duplicate his 34-point performance against the Knicks in the season opener, but he came close enough. The Memphis superstar finished with a triple-double — 27 points , 14 assists, and 10 rebounds — and made all the big plays in the final minutes to give the Grizzlies a 127-123 victory.

The Garden crowd couldn’t take its eyes off him. Those educated New York basketball fans have been down this road before with special opponents.

In fairness, though the Knicks could have traded up for Curry in 2009, there was no legitimate opportunity to do that for Morant a decade later. Morant did sit down with the Knicks before the 2019 draft and did call it “a great meeting,” yet he said he’d never been to New York and didn’t make the big city a preference the way RJ Barrett did.

New Orleans was always taking Zion Williamson at No. 1. Morant’s relatively minor knee procedure before the draft might’ve compelled Memphis to invite Barrett to a private workout (the Duke wing declined in the hope he’d land with the Knicks at No. 3), but the Grizzlies never seriously wavered on the Murray State star. 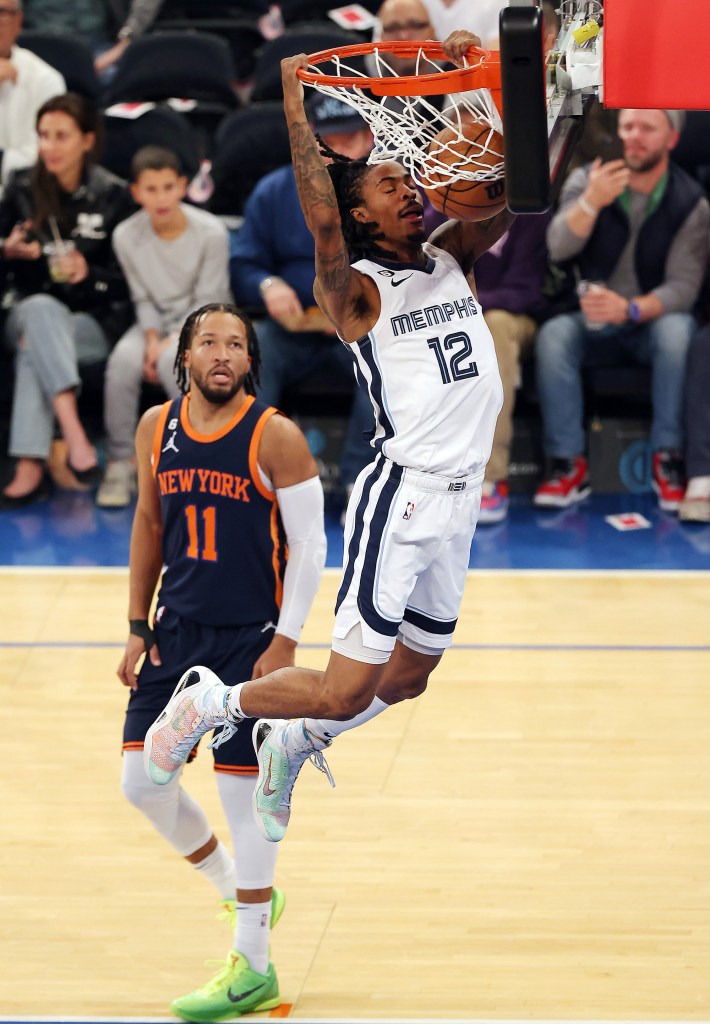 The Knicks could’ve traded down and set themselves up to add more assets to complement that summer’s anticipated free-agent haul of Kevin Durant and Kyrie Irving, but decided against it. The draft was supposed to fall off at No. 4, and after posting the league’s worst record of 17-65, the Knicks were tired of falling off.

But three-plus seasons later, it now appears there was something of a plunge at No. 3. If Williamson can stay healthy — an “if” as big as Zion himself — he will be a franchise player for New Orleans. If the young man who thoroughly outplayed him Friday night, Morant, can stay healthy, he could go down as an all-time great. In fact, he might be the most athletic true point guard to ever play the game.

Morant entered the Garden averaging 28.6 points, 7.3 assists, and 6.1 rebounds this year compared to Barrett’s 18.4, 3.0, and 5.4. For his career, Morant is shooting 47.4 percent from the field; Barrett is shooting 41.6 percent. Nobody would be surprised if Morant wins a league MVP award sooner rather than later. And yet it’s hard to say what level of stardom Barrett will reach, if any. 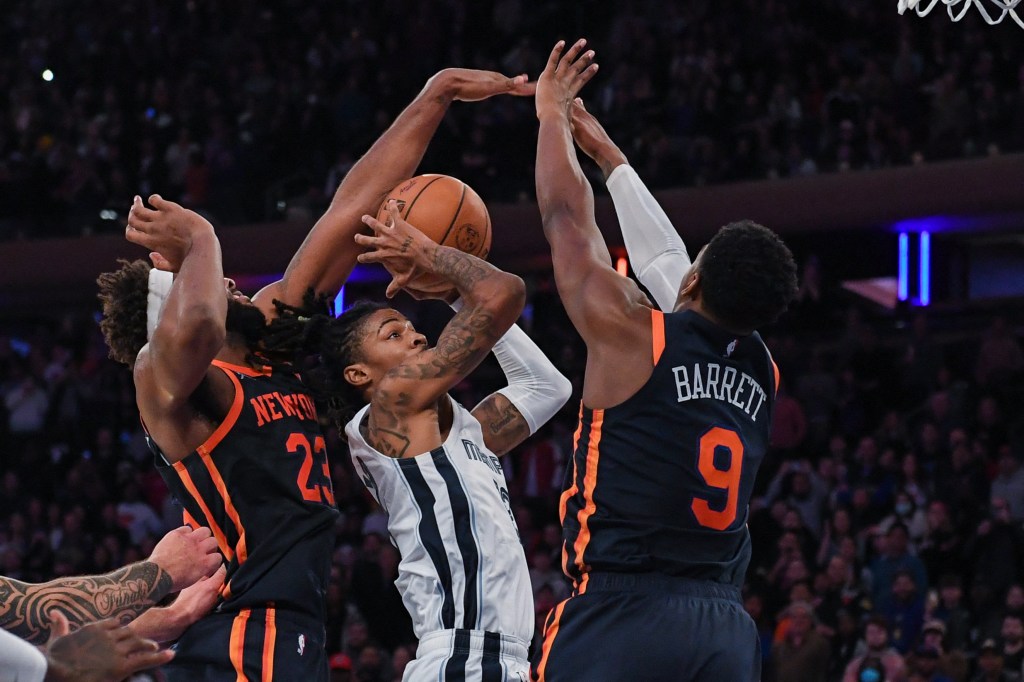 This isn’t to second-guess the drafting of Barrett, who still has a chance to be a difference-maker, or to compare his selection to that of Kevin Knox (over Shai Gilgeous-Alexander) or of Frank Ntilikina (over Donovan Mitchell). But it is fair to point out that the fifth pick in 2019, Cleveland’s Darius Garland, did make it to an All-Star Game before Barrett did.

It’s also fair to point out that, like Steph Curry a decade before him, Ja Morant nearly landed with the Knicks. There’s nothing worse than being one pick away in the NBA.