Kenny Pickett’s toss may have been the definition of a Hail Mary heave, but surely one of Pittsburgh’s tree-tall receivers could pluck this out of the sky. Surely one of the Jets’ defenders could put his hands where they shouldn’t be, keep hope alive. Surely the fact that the Jets were 1-16 in the state of Pennsylvania all time — 1-10 against the Steelers, 0-6 against the Eagles — would fix, karmically, a proper ending.

But instead the ball settled in the arms of Jets safety Lamarcus Joyner in the back of the end zone. For the second time in three weeks the Jets didn’t only make a spectacular comeback on the road, one for both sides of Lake Erie, they would manage to stiff-arm a long trail of unfortunate history.

And now 2-16 in the great Commonwealth of Pennsylvania.

“It wasn’t the prettiest game ever,” Robert Saleh said, “But we held up well.”

Maybe there will come a time when the Jets head coach will feel compelled to comment on the quality of his team’s wins, but he is still at that point in his career where quantity is far more important. After an extended spin in the wilderness, under three different head coaches and a gaggle of quarterbacks where the Jets lost in just about every way imaginable — and a few that defied description — making the kind of huge plays that win games isn’t merely everything.

It’s the only thing.

“In critical situations,” Saleh said, “our guys stepped up.” 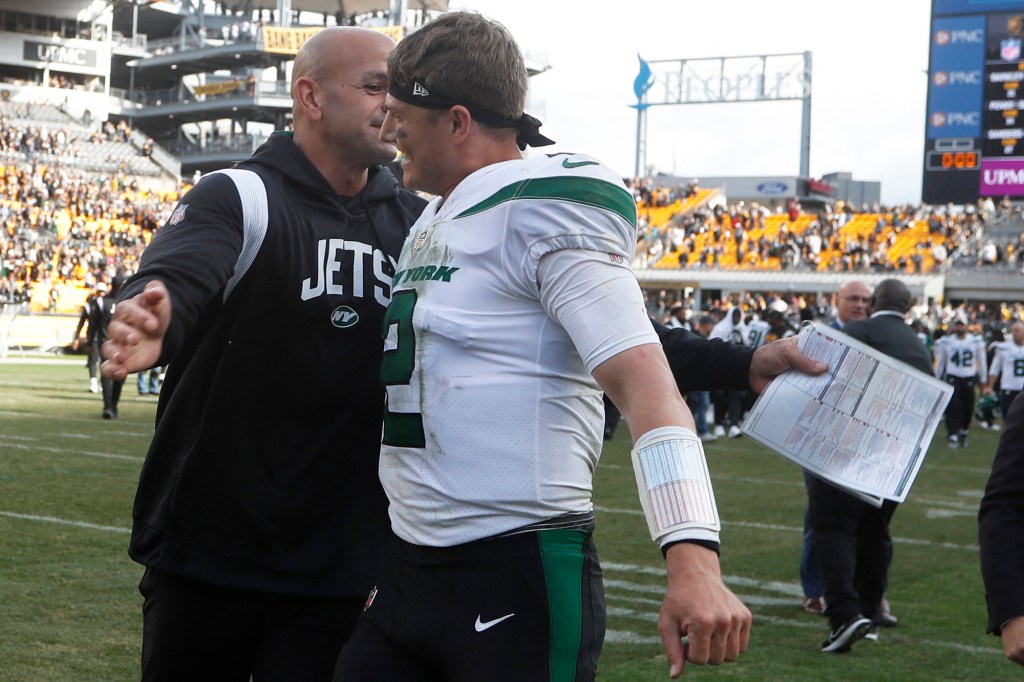 They did, across the board. There was the kid quarterback, of course, who showed some rust early, who can still deliver textbook-perfect throws on one snap and horrific ones the next. But Zach Wilson managed to chisel his first great NFL memory out of Western Pennsylvania granite, leading two touchdown drives in the game’s final 7 ½ minutes.

“That was some of the most fun I’ve had playing football,” said Wilson, who finished 18-for-36 on the day (after starting 6-for-16) for 252 yards, adding one touchdown throwing and another receiving. “The emotions, the ups and downs, trying to overcome adversity, such a cool fight by the guys.”

Said Quinnen Williams, who had a sack and a tackle for loss on a fine day: “To see him having fun out there … that was amazing.”

But Wilson wasn’t alone. The Jets’ perpetually persecuted offensive line looked like it was teetering on the brink of catastrophe all day, but at the end was able to protect Wilson just enough and cratered just enough holes to allow for a first-ever big day for rookie back Breece Hall, who ground his way to 68 yards rushing and the game-winning score.

It was the Jets defense that set all of that up. For a few anxious moments, it looked like the Jets were going to do for Pickett what they did a few years back for Baker Mayfield in Cleveland, whose brief tenure as a Browns folk hero began when he beat the Jets on a Thursday night after getting promoted at the half. Pickett played well, and his two touchdown runs allowed the Steelers to take a 20-10 lead.

But he also had a critical rookie gaffe. With the Steelers at the Jets 36, the clock grinding down to 3 ½ minutes, he was pursued by Solomon Thomas and Jake Martin and threw a fluttering duck toward his tight end, Pat Freiermuth. 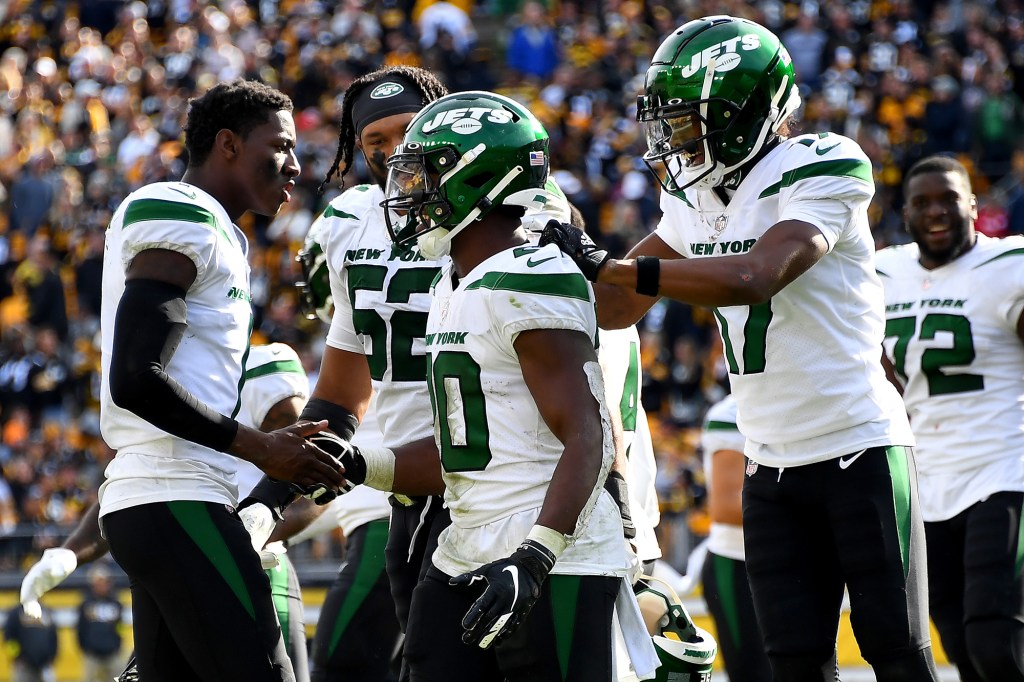 But Freiermuth was blanketed by Sauce Gardner — (an aside: he is the real deal) — the ball bounced in the air, and Michael Carter II pounced on it. These are exactly the kind of momentum-upending plays the Jets have craved for years. Wilson and the offense honored it by using all but 16 seconds of the remaining 3:34 to punch it in.

“There is,” said Braxton Berrios, the punt returner who also chipped in a critical catch on the Jets’ first TD of the fourth quarter, “definitely a culture shift.”

At 2-2, it is hard to argue otherwise. There are certain NFL precincts — like Pittsburgh — where 2-2 might inspire disgust and dismay.

The Jets are not one of those picky precincts. The Steelers are used to being Boardwalk — or at least Pennsylvania Avenue — the Jets more like Baltic Avenue. They took 2-2 happily back with them to the airport. And probably didn’t need the plane once they got there.