A day ago, there was mystery as to why Jets rookie right tackle Max Mitchell was placed on the NFI (non-football injury) list and deemed out for the season, according to head coach Robert Saleh.

Saleh declined to reveal the reason for Mitchell’s NFI designation, and the team, because of medical privacy laws, would not reveal the issue. On Thursday, Mitchell’s father, John, said his son had blood clots in his right calf and lung, but that his prognosis is excellent and his career is not in jeopardy.

“He should be fine,’’ Mitchell’s father told The Post. “It was an unexpected temporary setback. It should not affect his career long term. His future is promising.”

Mitchell, a fourth-round draft pick out of Louisiana, made his fifth start at right tackle Sunday in Minnesota but was removed in the second quarter because he was “struggling,” according to Saleh. 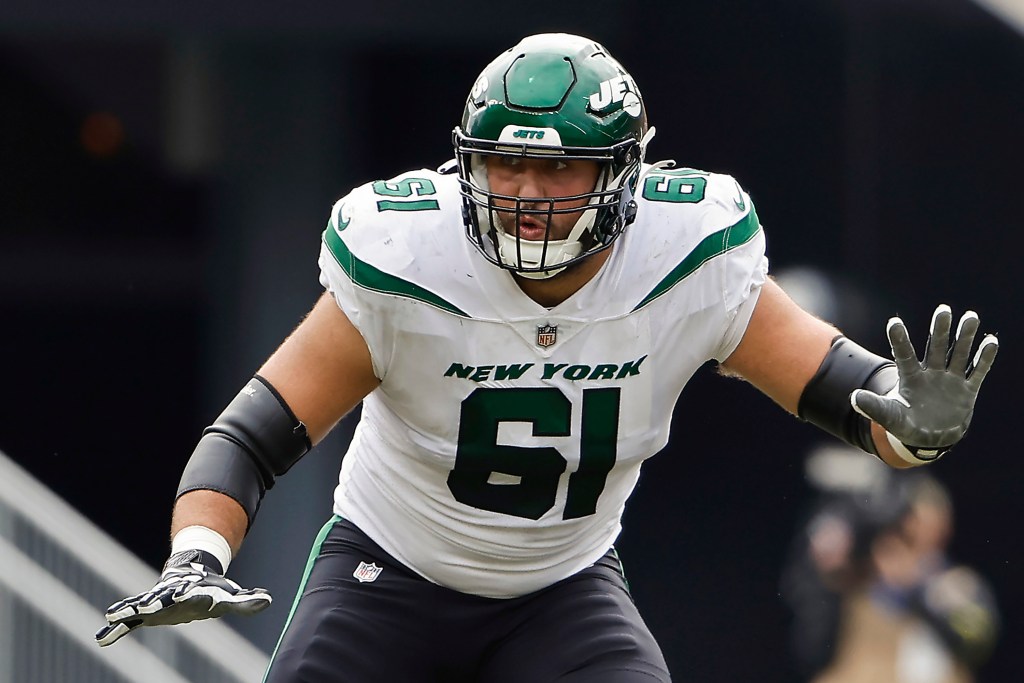 There was a thought that the issue was muscle spasms, but when Mitchell went for tests on Monday the clots were found. Mitchell is expected to be on blood thinners for a few months.

Special teams coach Brant Boyer on Thursday raved about kicker Greg Zuerlein in the wake of his terrific performance in Sunday’s 27-22 loss to in Minnesota, where he kicked five field goals, including a Jets-record 60-yarder.

“He’s got a cannon, that’s for sure, and he’s a great guy to deal with, great guy to coach,’’ Boyer said. “He has the potential leg talent to break the NFL record [66 yards by Justin Tucker], I really believe that — under the right conditions, certainly.’’

Boyer said of Zuerlein, whose nickname is “Greg the Leg’’ for his length, “Nothing fazes him.’’

“You see him kick a 60-yarder and everything and it’s like he does it every day,’’ Boyer said. “That’s how he approaches the game. He’s not running around, jumping up and down going crazy. It’s like he’s been there before, and it doesn’t surprise himself that he made that.’’

Jets defensive coordinator Jeff Ulbrich was asked how he’d assess his defense in the loss at Minnesota.

“Yeah, we didn’t play well enough, by any means,’’ he said. “I didn’t call the game well enough. I could’ve adapted earlier in that first half. We didn’t tackle like we could’ve, we had missed [opportinuties] on the ball. It just wasn’t characteristic of this group this year.’’

Ulbrich also addressed the team’s No. 21 rank in third-down defense, saying, “We had a period of time there like the last four or five games where we were improving and then the last couple, we’ve kind of fallen off a little bit. It’s the short windows that we’re struggling with.

“It’s a byproduct of a lot of things, but it’s me putting these guys in the best position to take advantage of what we got, and the strengths that we have.’’

Jets offensive coordinator Mike LaFleur addressed the offense being only 1-for-6 in the red zone against the Vikings, saying, “The execution was just a little bit off.

“Anytime you’re 1-for-6 it’s not good enough in the red zone,’’ he said. “You’re going to kick field goals, you’re going to lose ballgames in this league against good teams.’’

On the fateful fourth-and-goal call to have Mike White throw to Braxton Berrios, LaFleur said, “That was a play that we were extremely comfortable with. I mean we’ve been running that six or seven weeks in practice, waiting for that opportunity. I know it’s a little unorthodox maybe to go empty [backfield] in that situation, but the point was to get people open and we did that, we just didn’t execute it to get the touchdown.’’