Mike White was dancing in the huddle at the end on a new day when Jets fans chanted his name in the rain. And later, Tyler Conklin looked down the row to Mike White standing at his locker and said:

And all humble Mike White replied was: “No.”

“[Backup TE] Kenny Yeboah told me about him being The King of New York,” Conklin told The Post, “so now I’m all-in on King of New York. I might get shirts made … I’m running with it.”

There were 47 seconds left before the half when the loudest of the “Mike White” chants poured out of the WetLife stands.

Jets 31, Bears 10 when “Mike White, Mike White” was serenaded passionately again by this playoff-starved fan base that ever since he threw for 405 yards last season against the Bengals have fantasized about him wearing the crown.

“I think it started last year,” Conklin said, “but now it’s like solidified.”

Yes, it’s one game, but it’s one game the Jets (7-4) had to have for their playoff push with road games in Minnesota and Buffalo next.

It is TBD as to whether Zach Wilson is the Jets’ Quarterback of the Future. 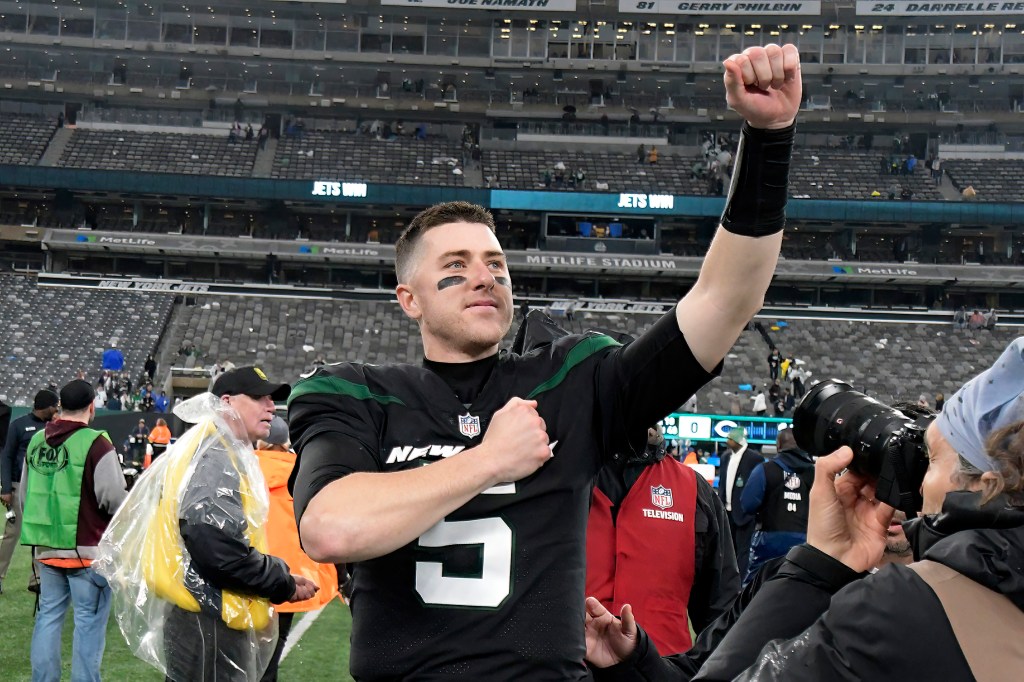 Mike White announced in no uncertain terms, with his arm and with his head, that he is — and deserves to be — the Quarterback of the Present.

The genie is out of the bottle.

In Mike White They Trust.

“I don’t think there was one moment where he was panicked or he was stressed,” veteran receiver Corey Davis said. “He gets guys lined up where they need to be, and he runs a good operation. It’s clean, it’s fast and it’s efficient, so he gives us a lot of confidence.” 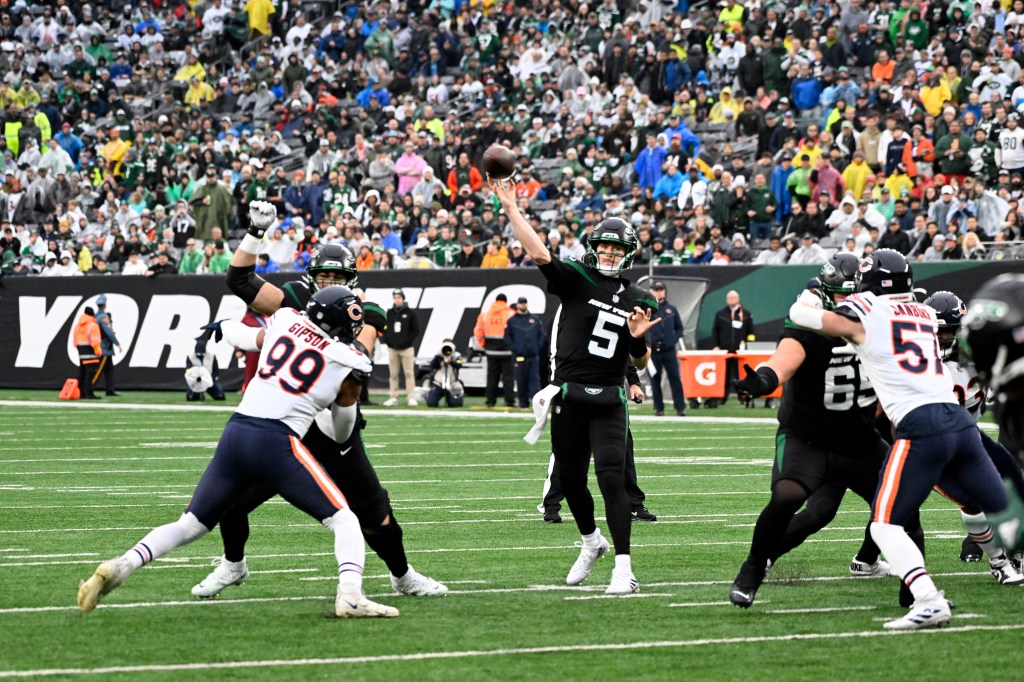 It is what winning quarterbacks are expected to do.

“You could tell he felt extremely confident with the game plan, and him and LaFleur on the same page,” offensive lineman Connor McGovern said, “and he was just ready to rock and he played with great confidence.”

A year ago White took what they gave him. On this day, there were times when he took what he wanted.

“The way he carries himself, the way he is in the huddle, you just kinda have to have … you just believe in him,” Conklin said.

The ease with which White operated and commanded the offense with his even keel energized the stadium and his teammates.

“He made the easy look easy,” Saleh said.

With the chance to end their 11-year playoff drought, the answer is easy: Mike White.

“He didn’t need to be anybody but Mike White, we didn’t need to turn into the Greatest Show on Turf,” Saleh said, “we just wanted him to play within himself and play efficient.”

Which is exactly what they have forever been asking of Zach Wilson: Make quick decisions. Make the right play. All that, and accuracy, too. 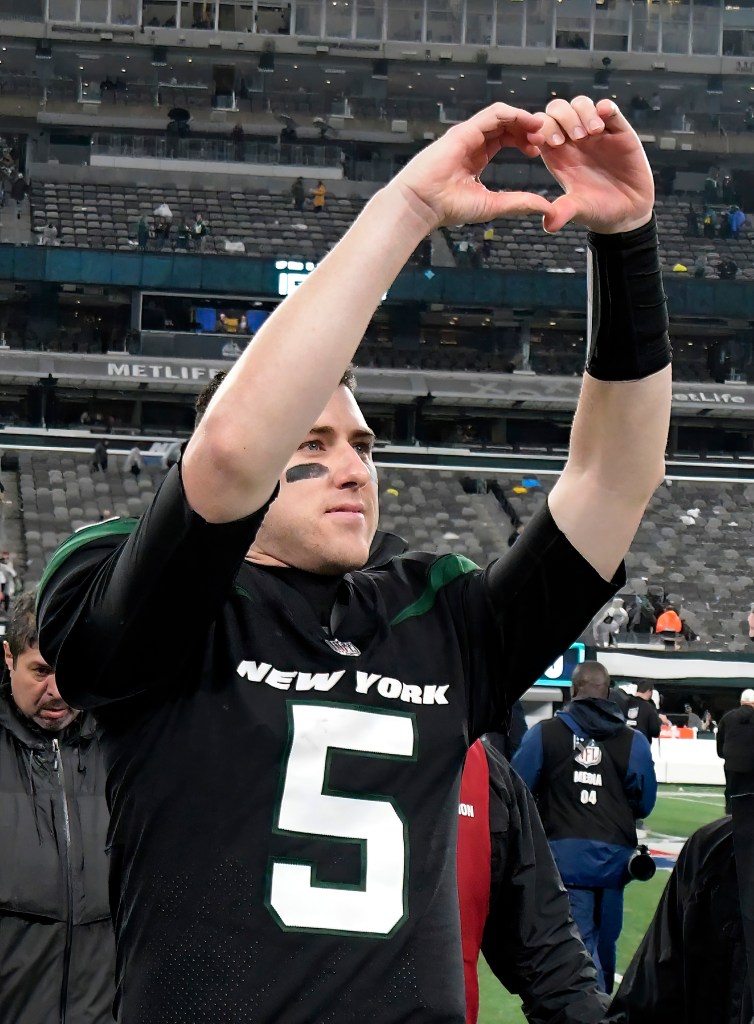 Plenty can change before the Jets return home on Dec. 18 against the Lions, but Mike White can enjoy his love affair for now.

“Towards the end of the game, I think it would be a lot cooler if they didn’t do it while we were trying to snap the ball,” White said with a smile of the fans chanting his name, “but no, I’m not gonna complain too much about that.”

White threw a pair of touchdown passes to Garrett Wilson, which meant that the 10th pick of the NFL draft was not devalued by the play of his quarterback.

“Personally the way I approach the quarterback position is being a calming presence in the huddle, especially when things aren’t going well, ’cause that’s when things can kinda spiral and snowball,” White said, “but it’s just distributing the ball and letting them be who they are. They’re all in that locker room for a reason. This is the NFL. Everybody that wears pads on Sundays are very good, and you just gotta get them the ball and get their confidence going, and once someone’s confidence is up, I believe at least that you’ll see their game go to the next level.”

White completed his first five passes for 61 yards before finding Garrett Wilson on third-and-goal for the Jets’ first opening-drive TD of the season and later connecting with him on a 54-yard score on which the dynamic weapon juked Kindle Vindor at the Bears’ 37 and was gone.

“All the throws we had to have, he put it right on the money,” Garrett Wilson said, “and even some of the ones that were a little 50-50 he put it where we had a chance, man.”

White completed passes to 10 different receivers — yes, even a 42-yard catch-and-run from Moore — in the first half.

“It felt like a complete team win,” White said.

King For A Day. And For Much Longer Than A Day.