ATLANTA — Max Scherzer worked out at Truist Park on Sunday unsure when his next start for the Mets will occur.

Two things appeared certain to the right-hander: He has at least one postseason outing awaiting him — either in the wild-card round of the playoffs or the NLDS — and he must clean up his mechanics.

A night earlier Scherzer allowed four earned runs over 5 ²/₃ innings against the Braves, a significant factor in the Mets losing their second straight in this three-game dogfight to help determine the NL East champion. The Braves have a two-game lead on the Mets after their 5-3 victory on Sunday night, leaving their magic number to clinch the NL East at one.

Scherzer, taking the long view, was philosophical about his performance during a pregame conversation with The Post.

“Coming into the postseason sometimes it’s good to get that clunker out of the way,” Scherzer said. “You iron out everything and you get right and then you lock it in and then you just ride it to the end. Let’s fast forward on this. Sometimes if this was a perfect one this last one, you go out there and you are mechanically off and you get the results, but you don’t realize how bad you are and then ‘boom’ you have a clunker in the offseason and it’s a lot worse.

“Sometimes its almost good to get this one out of the way. It’s baseball: you get punched in the face. It doesn’t matter who you are.” 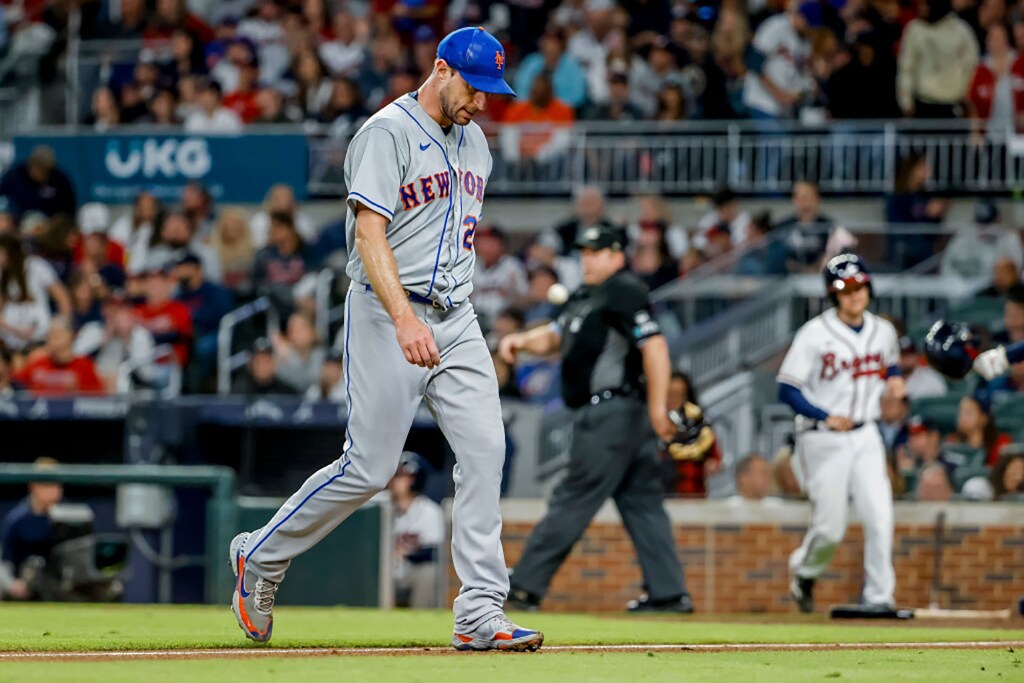 Scherzer reached 101 pitches, his highest total since returning from an oblique injury that cost him two starts in September. From a physical standpoint, Scherzer said he is not concerned. Following his previous two starts, against Milwaukee and Oakland, he said the oblique fatigued at the same rate as his arm. But he now feels the oblique has more stamina.

“I feel like my arm is fatiguing more than my oblique, so that is a good sign that I come out of [Saturday], my arm is tired — as it should be,” Scherzer said. “I threw 101 pitches; you don’t come in and feel great after throwing 101 pitches; that is not possible. I am sore in the right spots. My normal soreness in my arm is more than where my side is so that is the good. That is actually really good, that physically I am in a better spot than I have been the last two times.”

Scherzer theoretically could be available from the bullpen Wednesday if the game holds meaning to the Mets in the NL East race. Jacob deGrom would start that game under the same circumstances.

“I feel good about my process and what I’m seeing and more importantly what I am going to do next year with it,” Scherzer said. “I have got some idea this offseason of little adjustments I want to make and put myself in a consistent spot to execute pitches at a more consistent level with all my stuff being where it needs to be.

“But at the end of the day I missed 10 starts. That is unacceptable in my book. My game is durability. My game is about making every single start. I get that you might have a nick here or a nick there, but you have got to go out and make 30 starts, the fact that I didn’t is extremely frustrating to me.

“I get that it’s an oblique injury and things could happen at any time, I get it, but that doesn’t mean I have to like it. I have got to be in my eyes resetting for next year. In my mind I am making 30-plus starts next year and I have to do everything in the offseason to make that happen.”