He lost his golden oppor-tuna-ty.

A professional angler is out nearly $200,000 in prize money from a Rhode Island fishing tournament because officials don’t believe his nearly 200-pound catch was above board, according to a lawsuit.

The fishermen’s defense? They were too drunk to pass it.

Pollner says the test was unfair — and invalid — because he and his buddy were drinking like fish in celebration of the giant bigeye tuna they caught.

He is now suing competition host Tri-State Tournaments, claiming it was wrong to administer the polygraph so soon after they returned to dock. Rules allow seven days for a test to be administered. Such tests are given after fishing tournaments to ensure winners have followed all the rules. 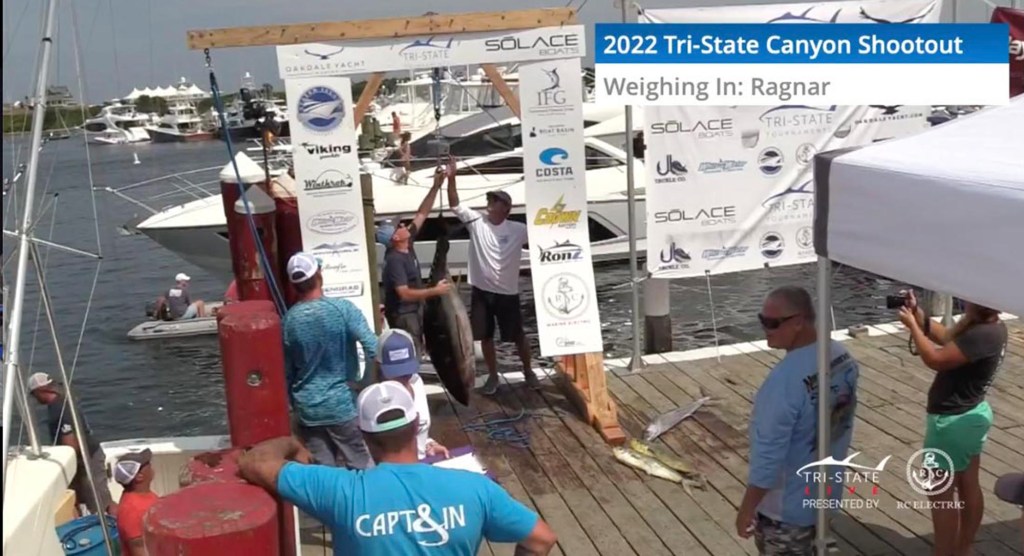 The winning fish being weighed before a gathered crowd.

The fish tale began July 24, when the annual four-day Tri-state Canyon Shootout in the waters off Block Island kicked off.

Competitors battled to see who could catch the largest wahoo, mahi mahi or tuna. Bigeye tuna can grow to 500 pounds and eight feet long.

Pollner, of Miami, set off aboard his 46-foot Westmac, christened Ragnar and piloted by Montauk fisherman Bonicelli. On the final day of the competition, they claimed they snagged a fintastic catch: a 195.6-pound bigeye.

The whale of a fish was big enough for fourth place for the largest tuna in the competition and earned Pollner $199,880 in side bets overseen by Tri-State, known as calcuttas.

Bonicelli was quizzed on whether he’d followed “tournament rules concerning” equipment, had witnessed or knew about any tournament infractions, and whether Ragnar broke any rules. The examiner claimed his responses “indicated deception,” according to the litigation.

Though Bonicelli and Pollner passed later lie-detector tests given by a polygraph examiner they’d hired, Tri-State rejected the results and has refused to release the winnings, according to the lawsuit.