"NATO's door is open," Stoltenberg told NATO foreign ministers meeting in Bucharest, Romania, renewing a commitment for Ukraine membership first made in 2008 but stalled since then. He noted that North Macedonia and Montenegro recently joined the West's chief post-World War II military alliance, and that Sweden and Finland also will do so soon.

"Russia does not have a veto" on countries joining, Stoltenberg said. "We stand by that, too, on membership for Ukraine."

"President Putin cannot deny sovereign nations to make their own sovereign decisions that are not a threat to Russia," the former Norwegian prime minister said. "I think what he's afraid of is democracy and freedom, and that's the main challenge for him."

A view shows remains of MLRS shells used by Russian troops for military strikes of the city and collected by sappers in Kharkiv, Ukraine, Nov. 29, 2022.

But Ukraine will not soon join NATO, which under terms of the alliance's charter, would likely push the armed forces of the 30-member nations directly onto the battlefield fighting Russian troops. It would be a commitment far beyond the billions of dollars in military and humanitarian assistance the U.S. and its allies have already sent to the Kyiv government to help Ukrainian fighters defend their country.

Many NATO countries believe the focus should remain on supporting Ukraine militarily, rather than a likely divisive political fight among themselves over membership for Kyiv. Some analysts of the war in Ukraine have suggested it is possible NATO membership was one factor in Putin's decision to invade.

Stoltenberg said, "We are in the midst of a war and therefore we should do nothing that can undermine the unity of allies to provide military, humanitarian, financial support to Ukraine, because we must prevent President Putin from winning."

In Bucharest, U.S. Secretary of State Antony Blinken announced that the United States is sending Kyiv another $53 million to support the purchase of critical electricity grid equipment in the face of weeks-long Russian airstrikes targeting Ukrainian infrastructure to knock out power and water systems as winter weather takes hold in the country. 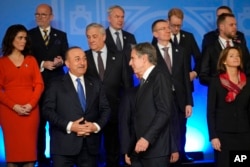 The top U.S. diplomat said the equipment would be sent to Ukraine on an emergency basis and include distribution transformers, circuit breakers, surge arresters, disconnectors, vehicles and other key equipment.

Stoltenberg, speaking ahead of two days of meetings in the Romanian capital, told reporters that Ukraine faces a "huge task" to rebuild what Russian missile strikes have destroyed.

Ukrainian Foreign Minister Dmytro Kuleba is scheduled to address his NATO counterparts, and Stoltenberg said he expects Kuleba to raise the need for Ukraine's allies to do even more to help that rebuilding effort.

The NATO chief said Putin is responding to his country's failures militarily by trying to deprive Ukrainians of water, power and heat.

"We need to support Ukraine because what we see is that President Putin is trying to use winter as a weapon of war, which is inflicting a lot of suffering on the Ukrainian people," Stoltenberg said.

Kuleba on Monday welcomed his Nordic and Baltic counterparts from Estonia, Finland, Iceland, Latvia, Lithuania, Norway and Sweden in Kyiv. 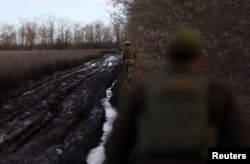 Members of the 68th Independent Jager Brigade of the Ukrainian Army avoid a road bogged down by thick mud next to field positions near the frontline in the Southern Donbas region in Ukraine, Nov. 29, 2022.

"The strongest message from this visit is: Ukraine needs to win this war and therefore ... Western support should be stronger; more heavy weaponry without any political caveats, also including long-distance missiles," Estonian Foreign Minister Urmas Reinsalu told the Reuters news agency.

The seven Baltic and Nordic nations comprised the largest delegation to visit Ukraine since Russia launched its full-scale war.

Ukrainian President Volodymyr Zelenskyy warned that Russian troops are preparing new strikes, and he met with senior government officials to discuss what actions to take.

Ukraine said Monday it had been forced to impose regular emergency blackouts across the country after a setback in its race to repair energy infrastructure hit by Russian missile strikes.

In his nightly video address Monday, Zelenskyy said Russia shelled Kherson and other communities in the region. In one week, Zelenskyy said, Russia "fired 258 times on 30 settlements of our Kherson region."

Zelenskyy said the only thing Russian forces are capable of is inflicting devastation on civilians and civilian infrastructure.

"That is all they leave behind," he said. Russians "take revenge for the fact that Ukrainians defended themselves from them."

Some material for this report came from The Associated Press, Reuters and Agence France-Presse.