Cam Thomas had a promising rookie season in 2021-22, but his playing time evaporated when the Nets added Seth Curry and then Goran Dragic.

If Thomas found minutes hard to come by down the stretch last season, he’s going to be facing an even more uphill climb to start his sophomore campaign.

“We’ll see how it goes after training camp. But he clearly is on a veteran team with a lot of guys who can play, have had a lot of success,” Nets coach Steve Nash admitted. “We know Cam’s talented, and just trying to continue to develop him and see if he can keep pushing and getting better at certain things that’ll help him get minutes.

“I said whether he plays or he doesn’t play, he has to stay positive, he has to keep the belief that this process is going to help him. So, as last year we saw he played stretches of the season and carried a large load at certain times during the year and then other times he doesn’t play, that’s very valid and possible this year. Whether he earns a ton of minutes or doesn’t, we still believe in Cam. He’s a very talented young basketball player that we want to develop.”

Thomas was one of only two Nets to play every game from Jan. 7 through Feb. 26, pouring in 13.6 points in 24.4 minutes per game. But after Dragic made his debut on Feb. 24, Thomas mustered just five points in 11.5 minutes and sat out four games over the final 22.

Now, the Nets not only have Kyrie Irving and Ben Simmons from the start of camp, but they also have Curry, Royce O’Neale and Joe Harris, who missed most of last season with an injury to his left ankle injury that needed two surgeries. 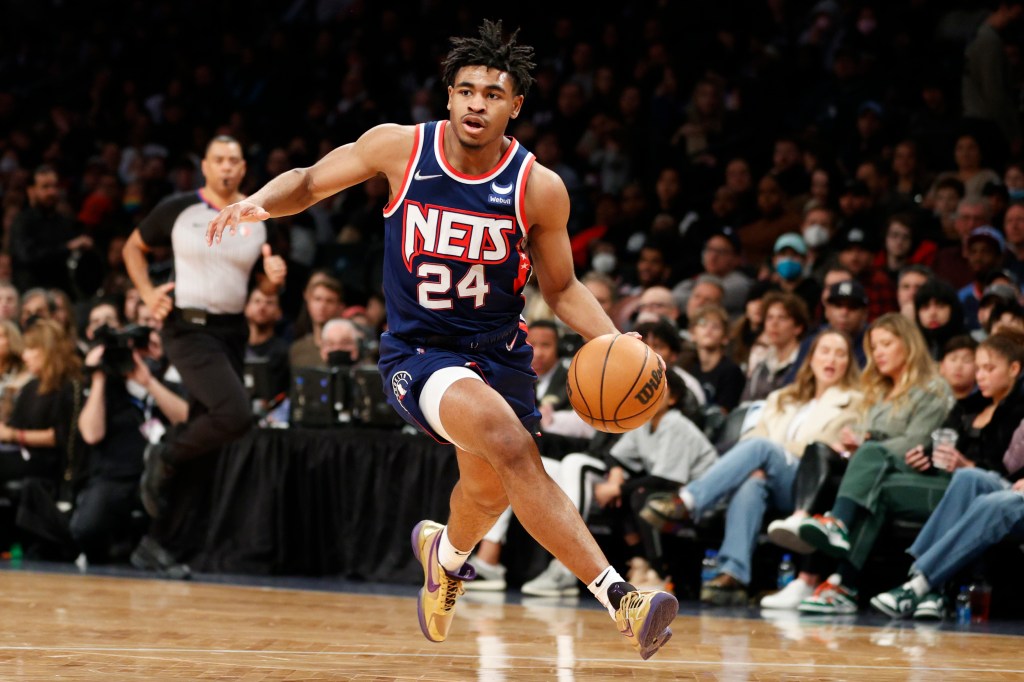 “There’s probably more competition this year with Kyrie playing every night, Joe Harris back, Ben being a versatile player. That’s before we get to Royce, Seth, Patty [Mills]. So a lot of competition with the guard spot,” Nash said. “That’s why it’s really important for Cam to continue to believe, continue to work, not take any days off.

“Hopefully for his career he earns minutes, but if he doesn’t, look at the circumstances. He’s got a lot of tough players with a lot of experience, a lot of great complementary players in the group. So, tons of competition.”

Nic Claxton worked on tweaks to his free throw form that the Nets gave him over the summer. In  Simmons’ case, however, it’s more about fostering confidence from the line.

“I’m not going to be discouraged if he doesn’t shoot a better percentage than he has in the past,” Nash said. “I’m gonna encourage him to keep going and I believe in him as a free throw shooter.”

The team website shared clips of practice, with O’Neale and Claxton paired with the new Big 3 of Irving, Simmons and Kevin Durant. O’Neale will likely be competing with Harris for the fifth starting spot, and is viewed as the better defensive player — something the Nets have put a focus on improving this offseason.

The Nets will host their sixth annual Practice in the Park on Sunday, Oct. 9 at Brooklyn Bridge Park’s Pier 2.