No. 3 Michigan traveled to Columbus as heavy underdogs, but you wouldn't know it watching Saturday's dominance.

The Wolverines went into the Horseshoe and cruised to a 45-23 win over No. 2 Ohio State, their first win in Columbus since 2000.

Saturday's matchup was the first in which both teams entered 11-0 since the "Game of the Century" in 2006. The Wolverines are now 12-0 for the first time since winning a national championship in 1997, while Ohio State dropped to 11-1. 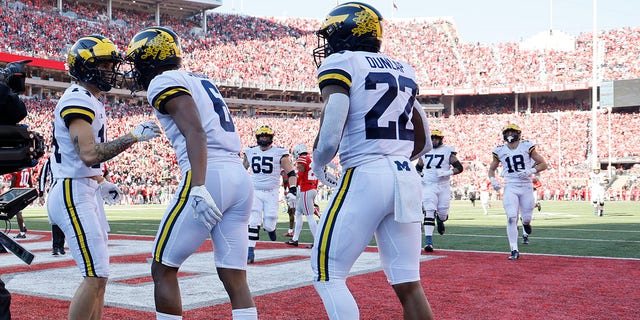 Michigan's Cornelius Johnson, center, celebrates with teammates after his touchdown against Ohio State during the first half of a game Saturday, Nov. 26, 2022, in Columbus, Ohio (AP Photo/Jay LaPrete)

Much like last season, Michigan's win has given the Wolverines legitimate championship hopes, while Ohio State needs a prayer for its College Football Playoff future (more on that soon).

The Buckeyes scored on the opening drive of the game, but the Wolverines tied the game at 10 in the second quarter with a 69-yard touchdown by Cornelius Johnson. After a Buckeyes field goal, the Wolverines needed just one play to take their first lead of the afternoon on a 75-yard score by Johnson. However, Ohio State answered right back with a touchdown by Marvin Harrison Jr., making it a 20-17 game entering the half.

The Wolverines got the ball to open the second half, and they took advantage. J.J. McCarthy found Colston Loveland for a 45-yard touchdown, putting Michigan up four early in the third quarter. Several drives later, Michigan went on its best drive of the day at the best time. A 15-play, 80-yard drive ended with a three-yard McCarthy draw into the end zone, and the ensuing PAT gave the Wolverines a 31-20 lead. 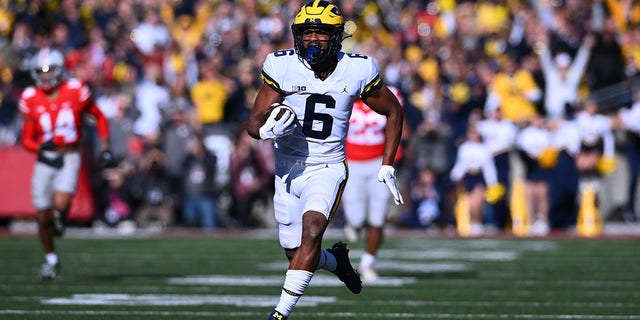 Cornelius Johnson of the Michigan Wolverines runs with the ball during the second quarter of a game against the Ohio State Buckeyes at Ohio Stadium Nov. 26, 2022, in Columbus, Ohio.  (Ben Jackson/Getty Images)

After forcing another Ohio State punt, the Wolverines went for the kill with a 57-yard field goal attempt, but it went wide left, giving the Buckeyes good field position with just over nine minutes to go.

A quick 43-yard pass from C.J. Stroud to Emeka Egbuka put Ohio State inside the red zone, but they had to settle for three with 7:23 to go. And Michigan answered right back. Donovan Edwards took the first play of the drive to the house for 75 yards, and Michigan had a 38-23 lead.

Stroud threw an interception with 4:30 to go to essentially ice the game. For good measure, Edwards took a handoff 85 yards to the end zone, putting Michigan up 45-23. It was Michigan's fifth touchdown of at least 45 yards in the game.

COLLEGE FOOTBALL WEEK 13 PREVIEW: EVERYTHING ON THE LINE AS MICHIGAN VISITS OHIO STATE

In the second half, the OSU offense sputtered. It scored just three points, punted three times and turned the ball over twice.

McCarthy threw for 263 yards despite completing just 11 passes, but it was those long touchdowns that helped his numbers. Edwards rushed for 216 yards on 22 carries. Johnson finished with 160 yards receiving on four receptions. 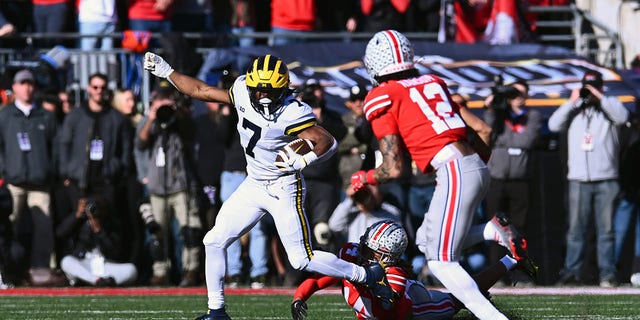 Donovan Edwards (7) of the Michigan Wolverines evades a tackle during the second quarter of a game against the Ohio State Buckeyes at Ohio Stadium Nov. 26, 2022, in Columbus, Ohio.  (Ben Jackson/Getty Images)

Egbuka and Harrison combined for 16 catches for 245 yards in the losing effort, while Stroud completed 31 of his 48 passes for 349 yards.

Georgia and Michigan will undoubtedly be the top two in the playoff rankings, and it's hard to imagine that No. 4 TCU will lose at home to a 4-7 Iowa State team. No. 5 USC hosts No. 13 Notre Dame later Saturday, while No. 6 LSU is on the road against Texas A&M (4-7). Safe to say, the Buckeyes are going to need some help.

The Wolverines will now gear up for the Big Ten Championship Game next Saturday with their opponent to be determined. After their biggest win since maybe that national title 25 years ago, they have much bigger goals in mind.