A store security guard and a teenage shoplifter were hospitalized after the pair fell down an elevator shaft of a Target in New York City following a violent fight, police officials said.

First responders were called to the five-story big-box store on Exterior Street near East 153rd Street in the Bronx around 11:15 a.m., according to authorities. 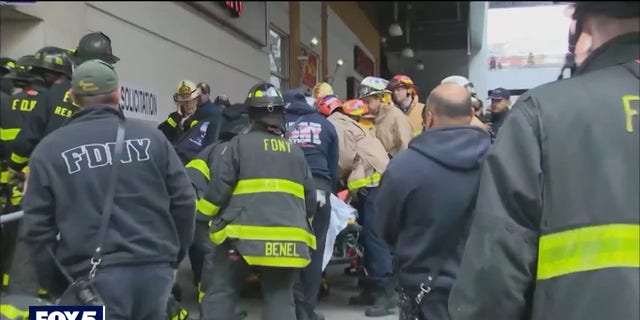 A victim was placed on a stretcher after being pulled from a Bronx elevator shaft. (Fox 5)

According to authorities, the Target security guard, 29, was attempting to stop a 16-year-old from shoplifting merchandise when the pair got into a tussle.

During the scuffle, they bumped into the elevator doors, which opened up, and they both fell down into the shaft.

When first responders arrived, they discovered the teen on top of the elevator. The employee had fallen around 10 to 15 feet past the elevator into its pit, the officials said in a news conference on Thursday. 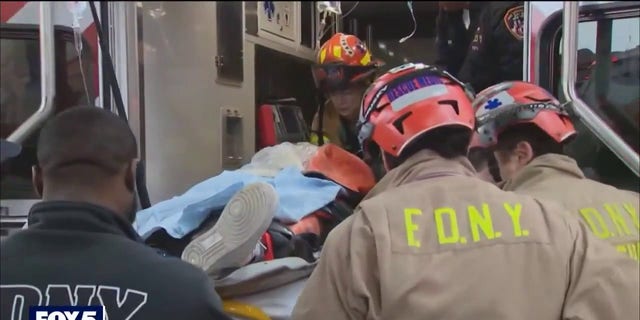 The Target worker was removed from the shaft at around 12:30 p.m. The victim was placed into a neck brace and wheeled into an ambulance.  (Fox 5)

Firefighters rescued the teen from the shaft "immediately."

The employee who fell into the pit was rescued "within an hour" using a pulley system. He was placed on a stretcher with a neck brace and taken to Lincoln Hospital in critical condition.

On Friday, the New York Police Department said that both victims' injuries were non-life threatening.

Sarah Rumpf is a Fox News Digital Production Assistant. You can reach her on Twitter at @rumpfsarahc

I scored a free honeymoon — and improved my credit score

Gunther's Millions,' heir to 'Tiger King,' shows how TV news can go to the dogs

To vilify our founders, Hulu’s ‘1619’ ignores what actually sparked the American Revolution

Priscilla Presley got $900K a year from Elvis Enterprises without company stake: lawsuit

Lil Wayne just announced a 2023 tour. Here’s how to get tickets.

Hochul calls for more charters for NYC, but she’ll have to fight to get them

‘On My Block’ spinoff ‘Freeridge’ another feather in Netflix YA cap

Social-justice programming for every college student

Iranian couple handed prison sentence for dancing in the streets

NFL Pro Bowl 2023: How to get shockingly cheap last-minute tickets

This Taylor Swift-inspired workout is going viral — but is it effective?

ChatGPT is growing faster than TikTok

Jimmy Garoppolo’s 49ers time is coming to a close

McCarthy describes 'good' first meeting with Biden, but 'no agreements' on debt ceiling

Pope Francis consoles Congolese victims: ‘Your pain is my pain’

MLK invoked as Tyre Nichols' life is celebrated in Memphis

Harris mourns Tyre Nichols at funeral and calls for police reform: He 'should have been safe'