In a major escalation of the war in Europe, Russian President Vladimir Putin announced Friday he is annexing about 20% of Ukraine.

The region, in the east and in the south, is only partly controlled by Russia because of a Ukrainian counteroffensive. In a belligerent speech, Putin referred to nuclear weapons, and accused the west of satanism. He vowed that the territory will be Russian "forever." President Biden responded that the U.S. will never recognize the annexation and will support Ukraine's military as long as it takes.

Seven months of war have been catastrophic for Ukrainian families, many of whom turn for hope to Olena Zelenska. The first lady of Ukraine was trained as an architect, made a living as a comedy writer, but awoke last February to a tragedy. Overnight, she became an ambassador, a mourner, and the healer of a nation fighting for its life.

We met in the capital, Kyiv, at a location we agreed not to disclose the day of our interview. Ukraine was forcing a Russian retreat, and exposing the horrors of the invasion. 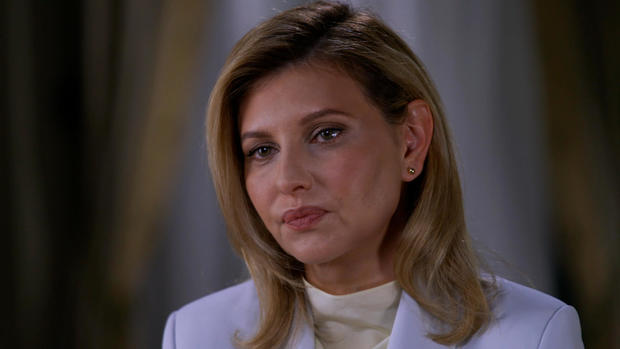 Scott Pelley: What have the families of Ukraine lost?

Olena Zelenska (translated): Half [our] families are separated, [Because] someone is at the front, someone went abroad to save their children, someone is under [Russian] occupation. People are afraid to leave their [homes] because of shelling. They're afraid to even try to evacuate. We have thousands of dead. Hundreds of children are dead.

Olena Zelenska (translated): They try to frighten people to make them run, to have towns and villages empty so they can occupy these territories.

Scott Pelley: Is it warfare or is it terrorism?

Olena Zelenska (translated): Definitely, terrorism. The war is being waged using modern means, but from the moral and ethical point of view, [it's] the Middle Ages.

Olena Zelenska is 44 years old, married 19 years to her husband, President Volodymyr Zelenskyy. Their names differ because in Slavic languages, surnames are often modified by gender. 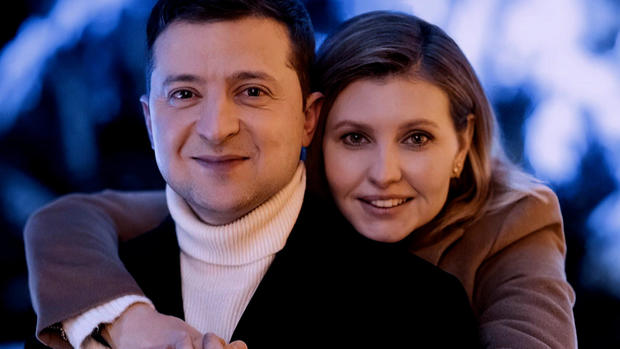 When we spoke to her husband in early April, he told us his wife and two children were in hiding. But weeks later, he deployed his wife like a weapon. In May, she showed First Lady Jill Biden the war's homeless in western Ukraine. In July, she came to Washington and became the first, first lady to address the U.S. Congress.

"I'm asking for weapons," she said then, "weapons that would not be used to wage war on somebody's else's land, but to protect one's home and the right to wake up alive in that home."

When we met, we noticed what seemed like a weariness she was determined to ignore. It was the price of the path she'd chosen—to meet her people, know their pain and bear the weight of empathy.

Scott Pelley: We met a man in Bucha yesterday. He and his family were fleeing the Russian invasion. The Russians opened fire on his car. His leg was destroyed, the car caught fire and he watched his wife and children burn to death. I find it hard to express the enormity of what's happening, and I wonder how you express the suffering of your people.

Olena Zelenska (translated): I feel like a part of these people. I feel as if this is my pain. [The] stories are terrifying and we try to somehow help the survivors. You just told me this man in Bucha had lost his leg. Well, a girl Sasha, lost her arm. Now she's in the United States. [I started a program with] the Ukraine House in Washington and [with] many American philanthropists and American doctors and hospitals. We found an opportunity to give the girl an artificial prosthesis. But every time she looks at her hands, she will see what she has lost. Sasha will always see what she lost in this war. 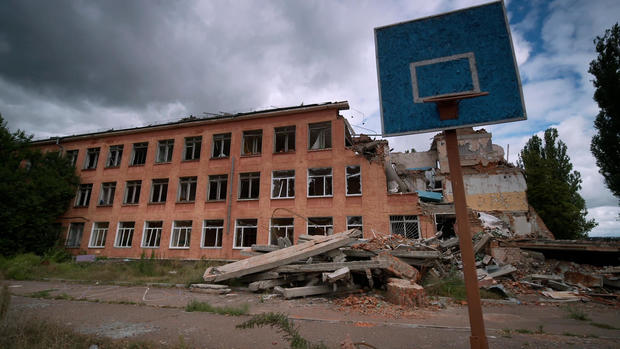 The world has watched, as Ukraine has lost entire cities. Nearly 500 hospitals and clinics have been hit. Schools are devastated, Mrs. Zelenska told us.

Olena Zelenska (translated): About 150 schools simply do not exist. About 900 schools have been damaged.

We saw what she means in Chernihiv, about three hours north of Kyiv. Public school 21 was used as a shelter when a Russian bomb struck. We asked some of those who were there to join us.

Scott Pelley: Why would the Russians bomb a school?

Inna Levchenko the school principal told us, "I thought it was a safe place for all of us. We even wrote the word 'Children' on the windows."

Nataliia Horbach was sheltering with her two boys.

Nataliia Horbach (translated): My face and my ear were injured, my head and my right arm were cut with some fragments. A man came over and helped me up and took me to a car that drove us to the hospital. When he helped me stand up, I asked him about the…

She couldn't quite say the word "children." 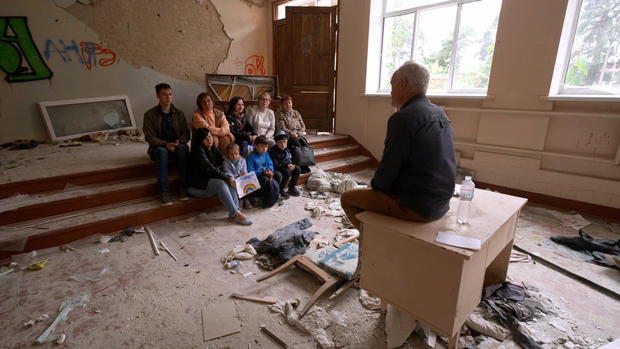 Survivors who were in Chernihiv speak with correspondent Scott Pelley

Valentyna Vasylchenko (translated): My grandson's heart was still beating. They were giving him medical assistance, but a lot of time was lost and he died in the ambulance near the house. My granddaughter, her fiancé, my daughter's husband, and my mother were found dead in the rubble.

Scott Pelley: Public School 21 in Chernihiv had 850 students. How are you educating the children of Ukraine today?

Olena Zelenska (translated): Around 3,500 schools will operate online only, because schools cannot receive students and because their parents are afraid to send their children to school. [Ukraine's] children went to school this year… and the first thing they learned [is] where the bomb shelter is, how to get there and what to do in case a missile strikes. We will fight. We will not give our children up. I don't know how we can forgive this. I don't think we will.

After the Russians severed communications with the occupied territories Ukrainians dropped messages in the Dnipro River – with the current and against the chance they would reach those behind the new iron curtain.

Olena Zelenska (translated): We really hope that our love letters were received by someone there and that they hear us. I truly hope [our people] will endure. We will never give [up our people]. And by the way, [there is this idea of giving up territory in some kind of negotiation.] Our people are there. We will never betray them.

Scott Pelley: That is not negotiable in the view of your government.

Olena Zelenska (translated): I really don't want to express political opinions. That's not my role. But imagine a situation where you've been attacked by bandits. They are threatening you, killing your children. And someone [suggests] maybe, it would be better to negotiate? [That] is impossible now. This is just my opinion as a citizen of Ukraine. 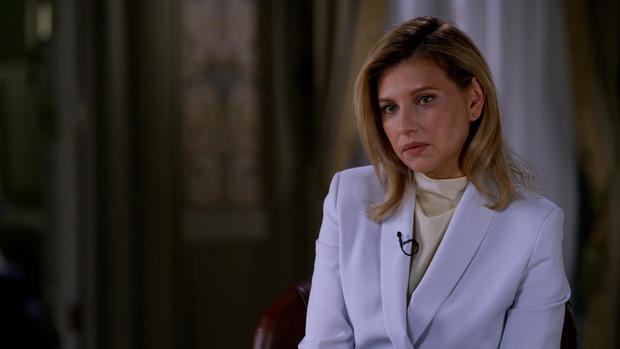 Olena Zelenska dated her future husband in college she became a writer on Zelenskyy's comedy shows. In a sitcom called "Servant of the People," he played a teacher who is elected president of Ukraine. He turned parody into power in 2019 when he actually ran and won 73% of the vote. The Zelenskyy's have an 18-year-old daughter and 9-year-old son.

Scott Pelley: Are you stronger than you thought you were?

Olena Zelenska (translated): Everyone has become stronger. I'm not unique. You survive and going through trials you automatically become stronger. So yes, we are getting stronger, but will that help us? I hope so.

Scott Pelley: Madam First Lady, may I show you some photographs from the United States? This is a picture I took on Fifth Avenue in New York. This is San Francisco. This is a home in the state of Florida. This is a bumper sticker where I buy my groceries. I took this picture on the east side of Manhattan. This is a baseball game in Denver, Colorado. And this is from Florida as well. What do you say to the American people?

Olena Zelenska (translated): I can say I really feel the support. When I was in Washington, I was handed a short letter written by a guy, named Hector. He's a teenager, 14 years old. He wrote me a short letter with words of support. By the way, if possible, and Hector sees this program, I would like to tell him.

Olena Zelenska (in English): Dear Hector, I remember it, I took your letter with me to Ukraine. And it was charming and it was extremely touching.

Olena Zelenska (translated): So, it seems to me that normal people understand what evil is and that the attacker is evil. That it is normal to defend your country, your children, your homes. I am sure that Americans themselves are like that.

Scott Pelley: What does the future hold?

Olena Zelenska (translated): We are dreaming about this. Over these months we've seen the human being is the center of everything. This is what makes us different from the aggressor. They don't count their [dead]. We count every person who died and we want everyone still alive to feel confident and to have opportunities [to grow]. That's what we dream about. That's how we want to see our country in the future.