The Monroe Doctrine, a muscular defense of national interests reflecting the burgeoning strength of the young United States, was espoused by President James Monroe on this day in history, Dec. 2, 1823.

"We owe it, therefore, to candor and to the amicable relations existing between the United States and those powers to declare that we should consider any attempt on their part to extend their system to any portion of this hemisphere as dangerous to our peace and safety," President Monroe said to a joint session of Congress in his seventh State of the Union address.

ON THIS DAY IN HISTORY, DEC. 1, 1955, ROSA PARKS REFUSES TO GIVE UP HER BUS SEAT TO WHITE PASSENGER

The statement reflected the "Era of Good Feelings" in the United States.

It was a period of relative peace, prosperity and domestic political accord that followed the War of 1812. Americans began to take stock of their growing power and influence on the world stage.

"Buried in a routine annual message delivered to Congress … the doctrine warns European nations that the United States would not tolerate further colonization or puppet monarchs," writes the National Archives. 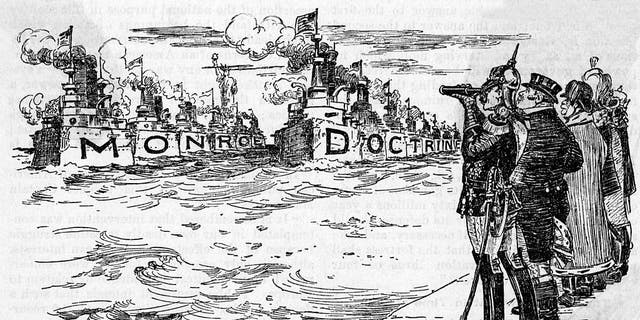 "The doctrine was conceived to meet major concerns of the moment, but it soon became a watchword of U.S. policy in the Western Hemisphere."

The Monroe Doctrine was later cited in key moments of history when the United States felt its interests were threatened by overseas imperial powers.

The Lincoln administration, while fighting the Civil War at home, touted the Monroe Doctrine while successfully siding with Mexican President Benito Juárez in his revolt against French-imposed ruler Austrian archduke Emperor Maximilian I.

"The quiet and wise upholding of the Monroe Doctrine by Abraham Lincoln provided more than sympathy," reports the Rolland Center for Lincoln Research. 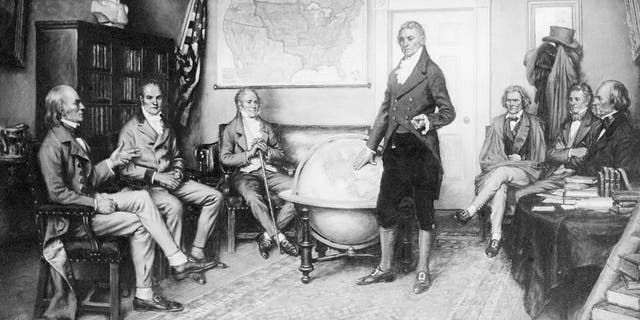 Illustration depicting the birth of the Monroe Doctrine. James Monroe, the nation's 5th president, is shown standing beside a globe; John Quincy Adams is seated at left. From a painting by Clyde O. DeLand. (Getty Images)

"It provided invaluable diplomacy at a time when Lincoln’s thoughts were consumed by the carnage at home."

"The Monroe Doctrine warns European nations that the United States would not tolerate further colonization or puppet monarchs."

He expanded upon the Monroe Doctrine with what's known as the Roosevelt Corollary, warning that the U.S. would intervene in Latin American crises to thwart efforts by European nations to exploit the problems for colonial gain.

"Adherence of the United States to the Monroe Doctrine may force the United States, however reluctantly, in flagrant cases of such wrongdoing or impotence, to the exercise of an international police power," Roosevelt said before Congress in 1904.

President John F. Kennedy leaned on the Monroe Doctrine during the Cuban Missile Crisis in the fall of 1962. The world was brought to the brink of nuclear war when the Soviet Union was found placing missiles in Cuba, in violation of America's hemispheric interests and safety. 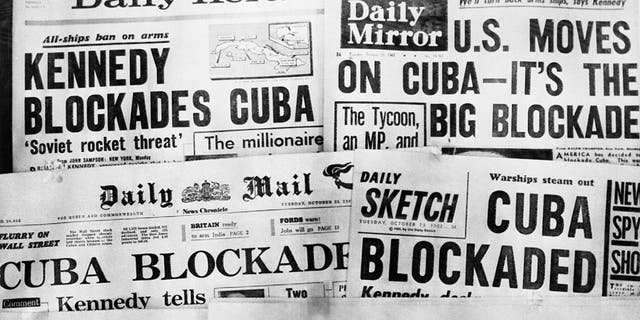 Headlines of Britain's daily newspapers on Oct. 23 announcing President Kennedy's blockade of Cuba. U.S. planes and ships, armed with orders to shoot if necessary, began taking up positions in the Caribbean on Oct. 22 to cut off shipments of Communist offensive weapons to Cuba. Kennedy told the nation that Soviet missiles and other weapons had turned Cuba into an armed camp capable of hurling destruction into the heart of America. (Getty Images)

"If at any time the Communist build-up in Cuba were to endanger or interfere with our security in any way ... or if Cuba should ever ... become an offensive military base of significant capacity for the Soviet Union, then this country will do whatever must be done to protect its own security and that of its allies," Kennedy informed Soviet premier Nikita Khrushchev in September 1962.

The Monroe Doctrine provides a lasting legacy for a leader widely proclaimed as the last president among the Founding Fathers.

"The Monroe Doctrine may force the United States … to the exercise of an international police power." — Teddy Roosevelt

Monroe was just 18 years old when the United States declared independence from England in 1776. The "old white men" who founded the nation were, in actuality, mostly young.

The teenage Monroe joined the Continental Army and served beside fellow Virginian General George Washington. Among other notable heroics, he crossed the Delaware River during the raid on Trenton on Christmas night 1776.

Monroe was nearly killed during the attack when he was struck in the shoulder by a musket ball.

"Monroe would have died, had it not been for a doctor, who tied his severed artery immediately after the wounding," writes American Battlefield Trust. 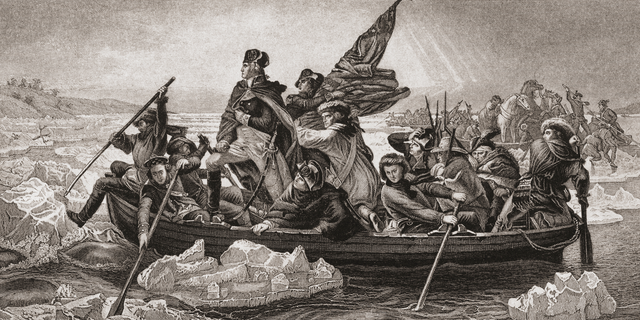 The future president is heroically portrayed carrying the American flag behind the Father of his Country in Emanuel Leutze's famous 1851 painting, "Washington Crossing the Delaware."

"Monroe was nearly killed during the attack on Trenton … a doctor tied his severed artery."

"President Monroe was a great advocate of nationalism … He put the nation on an independent course, no longer tied to the mast of European policy," writes historian Daniel Preston of the Miller Center, a think tank of presidential scholarship at the University of Virginia.

"Monroe's aggressive and successful conduct of foreign policy undoubtedly strengthened the presidency itself."