The creation of Mount Rushmore, which set the images of four American presidents in towering monumental relief in the Black Hills of South Dakota, began on this day in history, Oct. 4, 1927.

"Mount Rushmore is a project of colossal proportion, colossal ambition and colossal achievement," writes the National Park Service, which assumed management of the landmark by order of President Franklin D. Roosevelt in 1933.

Danish-American sculptor Gutzon Borglum led the effort, which employed about 400 men and women before it was completed on Oct. 31, 1941.

"A monument's dimensions should be determined by the importance to civilization of the events commemorated," Borghlum said of his majestic relief, in which the face of each president stands about 60 feet in height.

Mt. Rushmore in South Dakota, with fireworks in the background.   (Photo by H. Armstrong Roberts/ClassicStock/Getty Images)

"Let us place there, carved high, as close to heaven as we can, the words of our leaders, their faces, to show posterity what matter of men they were. Then breathe a prayer that these records will endure until the wind and the rain alone shall wear them away."

When Texas Sen. Tom Connolly questioned the project, Borglum responded fiercely, "Mount Rushmore is eternal. It will stand until the end of time."

"A monument's dimensions should be determined by the importance to civilization of the events commemorated." — Gutzon Borglum

The artist never saw his vision to completion.

He died of a heart attack in March 1941. His son Lincoln Borglum oversaw the project in its final months.

MEET THE AMERICAN WHO FOUNDED THE STURGIS MOTORCYCLE RALLY, ‘PUT THE BROTHERHOOD IN MOTORCYCLES'

Washington's faith in the new republic in its darkest hours earned him the title Father of His Country.

Jefferson gave humanity the belief that "all men are created equal."

Roosevelt was one of the world's leading reformers and environmentalists and won the 1906 Nobel Peace Prize.

And Lincoln emancipated from slavery nearly 4 million Americans and inspired the nation through the tragedy of the Civil War. 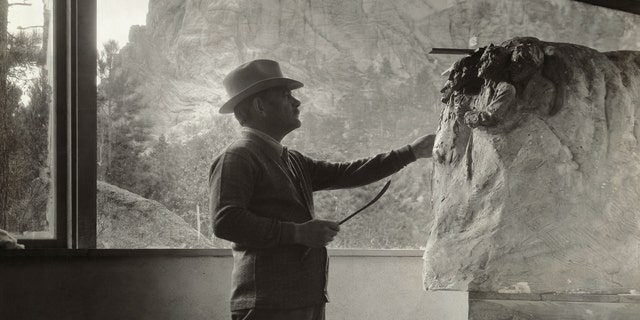 Gutzon Borglum (1867-1941), American sculptor, at work in his studio on the model for Mt. Rushmore. Photograph circa 1930s.  (Photo by George Rinhart/Corbis via Getty Images)

Yet those achievements are not good enough for some Americans today — as Mount Rushmore has come under attack in recent years by "woke" pundits.

"Can we retire using ‘Mount Rushmore?' That should be offensive to all of us, especially Native Americans — indigenous people who were the first people here before Christopher Columbus," former NBA star and basketball analyst Jalen Rose said in a video tweet in August.

"That land was stolen from them when it was discovered that it contained gold," he also said.

The process for carving the monument from a mountain face of granite and sandstone was ambitious, daring and dangerous.

The act prohibits the use of federal funds "to alter, change, destroy or remove the likeness, the name of or any of the faces on the Mount Rushmore National Memorial," Johnson’s office said in a press release.

MEET THE AMERICAN WHO INVENTED THE HARD HAT, A PROUD SYMBOL OF OUR NATION'S WORKING CLASS

The process for carving the monument from a mountain face of granite and sandstone was ambitious, daring and dangerous. 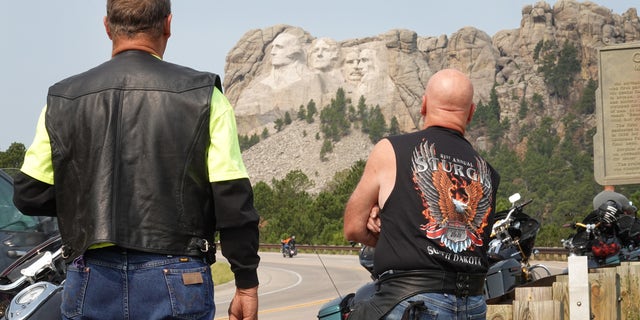 Bikers stop to take in Mt. Rushmore on Aug. 9, 2021. Every August, hundreds of thousands of motorcycling enthusiasts are attracted to the southwest corner of South Dakota for the annual Sturgis Motorcycle Rally.  (Photo by Scott Olson/Getty Images)

Rock was first blown off the mountain with the use of targeted explosives before the process got increasingly more precise.

"Dynamite was used until only three to six inches of rock was left to remove to get to the final carving surface," writes the National Park Service.

Not one person died in the 14 years of construction despite the explosives, heights and daunting conditions.

"At this point, the drillers and assistant carvers would drill holes into the granite very close together. This was called honeycombing. The closely drilled holes would weaken the granite so it could be removed often by hand."

The National Park Service also said, "After the honeycombing, the workers smoothed the surface of the faces with a hand facer or bumper tool. In this final step, the bumper tool would even up the granite, creating a surface as smooth as a sidewalk."

The work "was exciting, but dangerous" — yet not one person died in the 14 years of construction despite the explosives, heights and daunting conditions, the NPS reports.