Laviska Shenault caught a 67-yard touchdown pass from Baker Mayfield, Marquis Haynes returned a fumble 44 yards for a touchdown and the Carolina Panthers defeated the New Orleans Saints 22-14 on Sunday to snap a nine-game losing streak.

Jameis Winston, playing with an injured back, completed 25 of 41 passes for 353 yards with a touchdown and two interceptions, while rookie Chris Olave had nine catches for 147 yards for a Saints wide receiver corps that lost Michael Thomas, Jarvis Landry and Tre’Quan Smith to injuries in the second half. 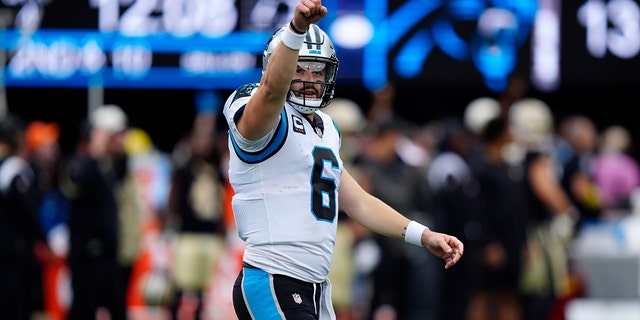 Carolina's defense held Winston and the Saints scoreless for three quarters before Mark Ingram cut the lead to 13-7 with a 5-yard TD run.

But then Shenault, acquired in a trade with Jacksonville late in the preseason and activated for the first time Sunday, caught a pass in the flat, juked a defender and raced along the left sideline for a touchdown to give the Panthers some cushion.

Carolina's defense took it from there, intercepting Winston twice in the fourth quarter to put the game away. 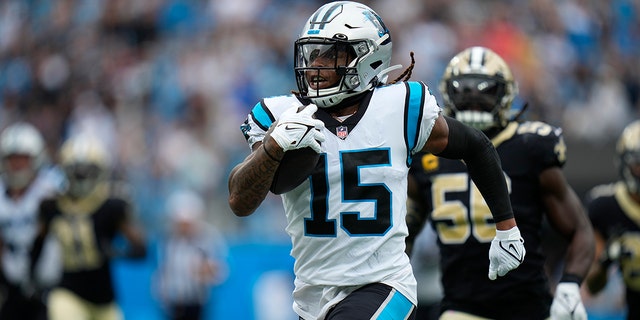 Carolina Panthers wide receiver Laviska Shenault Jr. (15) runs the ball down the field for 67 yards during the second half of an NFL football game against the New Orleans Saints, Sunday, Sept. 25, 2022, in Charlotte, N.C. (AP Photo/Rusty Jones)

Cornerback Jaycee Horn got a hand on Winston's pass on a blitz and defensive tackle Derrick Brown reached out to grab the ball with one hand for the interception, setting up Eddy Pineiro's third field goal to give Carolina a 22-7 lead. Winston answered with a 4-yard TD pass to Marquez Callaway, but Horn intercepted Winston on a Hail Mary at midfield as time expired to seal the victory.

Winston fell to 4-7 against the Panthers during his career, with 18 interceptions and 10 touchdown passes.

The Panthers entered Week 3 as the only NFL team without a takeaway.

But they got a big one early as Frankie Luvu reached his arm in and ripped the ball away from Alvin Kamara at the line of scrimmage. Haynes picked up the loose ball and rambled 44 yards for a touchdown with an entourage by his side. 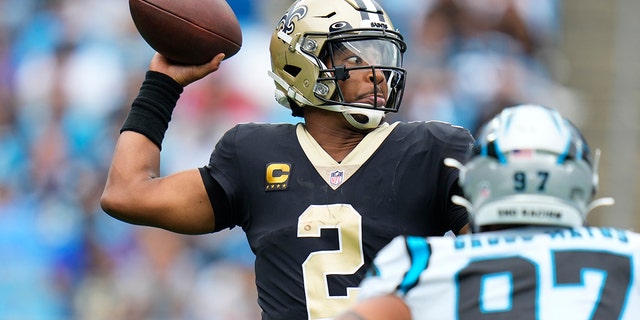 New Orleans Saints quarterback Jameis Winston (2) sets back to pass the ball during the first half of an NFL football game against the Carolina Panthers, Sunday, Sept. 25, 2022, in Charlotte, N.C.  (AP Photo/Rusty Jones)

Saints kicker Wil Lutz missed one field goal and had another blocked.

Saints: The wide receiver position was decimated by injuries in the second half with Landry (ankle), Thomas (foot) and Smith (concussion) all leaving the game with injuries. LG Andrus Peat exited earlier with a concussion.