An animal rights group is calling for a sex ban to be placed on men who eat meat.

People for the Ethical Treatment of Animals (PETA)’s German division claims devouring sausages and schnitzel is a symptom of toxic masculinity, that it’s killing the planet.

The non-profit organization has urged women to go on a sex strike to “save the world”. 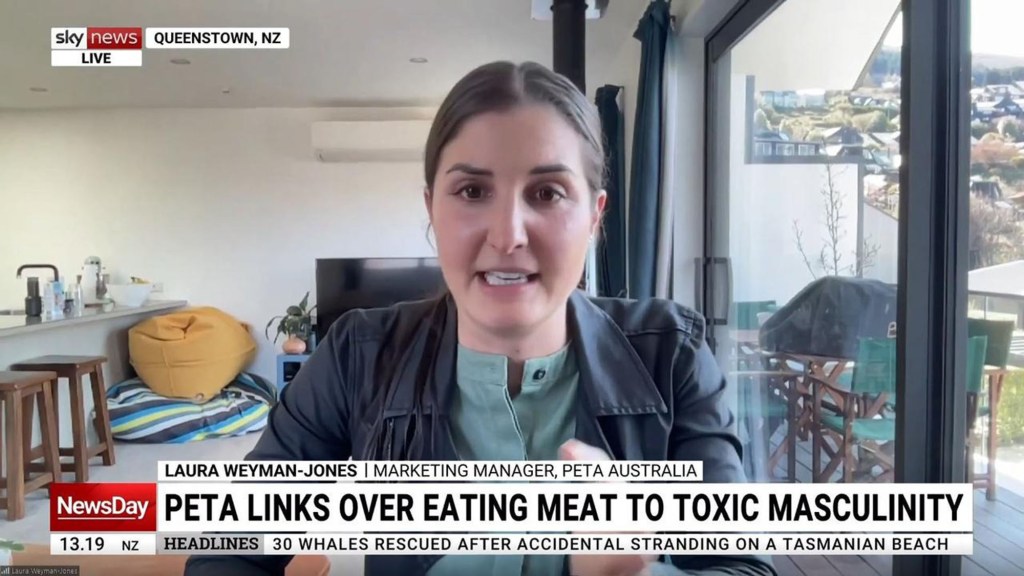 The PETA Australia representative said its organization’s statement was designed to be a conversation starter, before adding, “we really don’t care about your sex lives”.

“What we do care about is the planet and the animals we share it with and those animals are dying by the billions in the crudest ways imaginable for burgers and sandwich filling,” she told co-host Tom Connell.

“It’s a conversation starter. Otherwise, I guess you wouldn’t have invited us on to talk about it.”

The Sky News presenter asked Ms. Weyman-Jones to clarify whether all of PETA’s media releases are conversation starters, stating: “But you’re not seriously saying there should be any sort of ban?”

“We really don’t care what people do or don’t do in the bedroom, it’s none of my business,” she replied.

“But like you said it’s a great conversation starter otherwise you wouldn’t have called us. This is a pressing topic we all need to be talking more about.”

Ms. Weyman-Jones suggested people to “take everything with a bit of humour” and see the ban as “very good advice.”

“We know that vegan men get more matches on dating apps because compassion is attractive,” she said.

“We know that artery-clogging meat increases the risk of erectile dysfunction and every meaty meal is throwing us closer to an environmental catastrophe, there’s absolutely nothing sexy about it.”

PETA Germany pointed out a study published by the scientific online journal PLOS ONE which found that men caused 41 percent more greenhouse gas emissions than women largely because they consumed more meat.

“Who doesn’t know them, the suburban fathers handling beer bottles and barbecue tongs, who sizzle 70-cent sausages on their 700-euro grill. The zucchini provided by the visitor is viewed with suspicion and tolerated only reluctantly,” Daniel Cox, Team Leader Campaigns at PETA Germany said in a statement.

“The fact that Germany’s ‘grill masters’ believe they have to prove their masculinity to themselves and their peers by consuming meat does not only happen to the animal’s chagrin.

“Now there’s scientific evidence that toxic masculinity also harms the climate. So a hefty meat tax of 41 percent for men would be appropriate. A ban on sex or reproduction for all meat-eating men would also be expedient in this context.”