It is unclear whether the four University of Idaho students killed in a quadruple homicide last month were targeted, police said Wednesday, in a departure from previous statements made about the still-unsolved murders. On Thursday, police clarified that they do believe the attack was targeted, but do not know whether the attacker targeted the students or their residence.

The latest statement from Moscow police comes after saying it was a "miscommunication" when the county prosecutor said at least one of the victims was "undoubtedly targeted" in the attack.

"Our clarification last night directly addressed comments made by Latah County Prosecutor Thompson, who said the suspect(s) specifically looked at this residence, and that one or more of the occupants were undoubtedly targeted," a police spokesperson said in a statement to CBS News, which marked the bureau's latest update amid an ongoing investigation involving multiple law enforcement agencies. "We remain consistent in our belief that this was indeed a targeted attack but have not concluded if the target was the residence or its occupants."

The police department's most recent announcement came after it appeared to backtrack on previous statements about the nature of the killings.

"Conflicting information has been released over the past 24 hours," the department said on Wednesday. Moscow police cited earlier statements from the Latah County Prosecutor's Office, suggesting that "the suspect(s) specifically looked at" the residence where all four students were stabbed to death in mid-November, "and that one or more of the occupants were undoubtedly targeted."

"We have spoken with the Latah County Prosecutor's Office and identified this was a miscommunication," police said in the news release. "Detectives do not currently know if the residence or any occupants were specifically targeted but continue to investigate."

Authorities have yet to name or arrest a suspect in connection with the murders, despite an ongoing investigation that was launched more than two weeks ago. Early on the morning of Nov. 13, University of Idaho students and housemates Kaylee Goncalves, Madison Mogen and Xana Kernodle, in addition to fellow student Ethan Chapin, were fatally stabbed at the women's residence — a house near campus that they rented — after returning from nights out in downtown Moscow and the fraternity Sigma Chi. 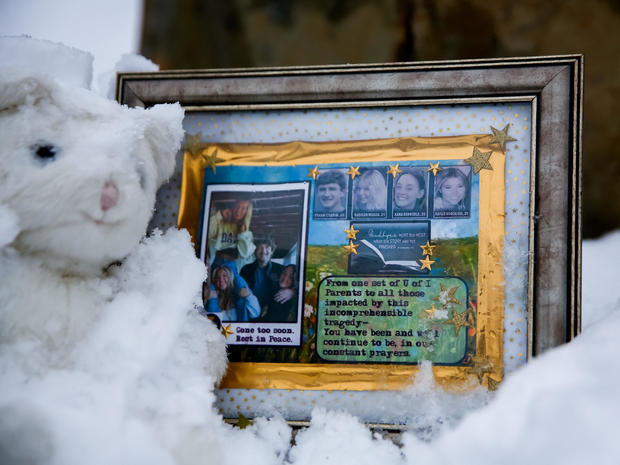 A small frame remembering Ethan Chapin, Madison Mogen, Xana Kernodle and Kaylee Goncalves sits in the snow outside of the residence where the four students were killed on November 13 in Moscow, Idaho, U.S., November 30, 2022. LINDSEY WASSON / REUTERS

Goncalves, Mogen and Kernodle had two other housemates, both of whom were home asleep while the murders took place. Neither were hurt, and police announced earlier this week that both surviving students had been ruled out as potential suspects in the case. And, although officers noted that they had reviewed "hundreds of pieces of information" that indicated someone may have been stalking Goncalves prior to the killings, the Moscow Police Department said investigators have not verified those tips or identified any possible stalker.

Police started to publicly characterize the gruesome attack as "targeted" several days into their investigation. In an update shared on Nov. 15, the department, confirming that a suspect was not yet in custody, said their preliminary investigation led detectives to believe that "this was an isolated, targeted attack and there is no imminent threat to the community at large."

Latah County Prosecuting Attorney Bill Thompson backpedaled on that point in an interview with NewsNation's Brian Entin on Tuesday, where he said the term "targeted" may not have been interpreted as authorities intended.

"It seems like the word 'targeted' has had different understandings for different people who were listening and perhaps isn't the best word to use," Thompson said. "The bottom line is that whoever is responsible for this is still at large. That can't be changed. My understanding is that investigators believe that whoever is responsible was specifically looking at this particular residence. But that's all that they can offer at this point."

Alivea Goncalves, the sister Kaylee Goncalves, shared her frustration over police's use of the term "targeted," without providing the victim's families with additional information to support that, in a separate NewsNation interview.

"Law enforcement is kind of throwing around this word 'targeted,' but we don't know that means, and it almost makes it feel alienating because we don't have any more information on that," Alivea Goncalves said. "I don't know who that target was, if it was one of them, if it was all of them. I just don't know."

On Wednesday night, family members of the victims came to the university and spoke at a vigil.

Steve Goncalves, Kaylee's father, said that his daughter and Mogen were best friends who were inseparable since that met in sixth grade.

"They went to high school together, then they started looking at colleges, they came here together. They eventually got into the same apartment together," he said. "And in the end, they died together, in the same room, in the same bed." 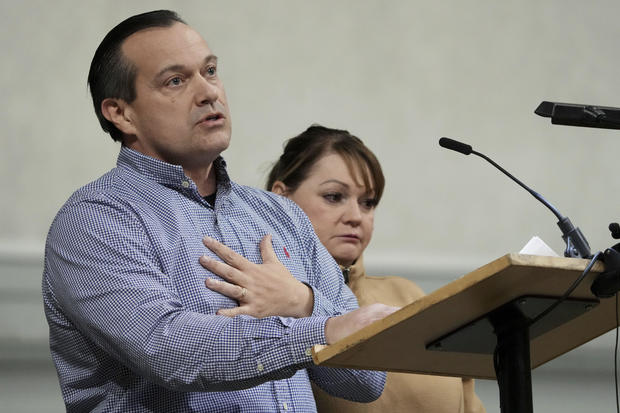 Steve Goncalves talks about his daughter, Kaylee Goncalves, who was one of four University of Idaho students who were killed on Nov. 13, 2022, on Nov. 30, 2022, during a vigil for the four students in Moscow, Idaho. Ted S. Warren / AP