The letter accomplished the exact opposite of its purpose: It motivated parents and exposed the educational establishment as a paper tiger, so desperate to maintain control that it cannot tolerate legitimate criticism from moms and dads. Since then, the NSBA has lost 25 of its state affiliates.

The overwhelming backlash should have been a lesson for progressives: When you wage war on parents, you will lose. Instead, the left chose to double down on a failed strategy that is galvanizing families against the educational establishment.

An early sign that Democrats learned nothing from the NSBA controversy was Terry McAuliffe’s failed campaign for Virginia governor. McAuliffe held a rally with teachers' union boss Randi Weingarten the day before Election Day. His opponent, Glenn Youngkin, embraced parental rights. McAuliffe, a Democrat, lost by two points; Biden had won the state by 10 points the year prior.

Education was a major factor: Exit polls showed that it was the top issue for 14% of voters, behind the economy and COVID-19 but ahead of healthcare, immigration, and law enforcement. Education is no longer a second-tier issue.

Three members of the San Francisco Board of Education learned this the hard way when they were recalled by voters in February. The recall effort had been brewing for nearly a year, after the board voted to permanently end a merit-based admissions policy at the elite Lowell High School and instead use a lottery system, all in the name of "equity." Parents were rightfully furious. The board refused to undo the policy, so parents undid the board by ousting three people, including its president. (The upheaval worked: The new board has restored merit-based admissions at Lowell.) When leftist identity politics have gone too far for San Francisco, of all places, it is safe to say that a tidal wave of change is coming.

The Biden administration made the same mistake of poking the bear – mama bears and papa bears, to be exact – by proposing a Title IX rule that would codify its gender ideology into law. The rule would force schools to treat students in line with their gender identity, meaning that schools must allow boys in girls’ restrooms and locker rooms, and schools would be forced to intervene if a teacher or student declines to use someone’s preferred name or pronouns.

Judging by the sheer volume of comments, a record-breaking 240,000, the Title IX rule is the most controversial rule in Education Department history. A quick perusal of the comments reads like an outcry of sanity against a radical rule. By law, the Department of Education must address the content of each comment it receives. It cannot legally ignore the tidal wave of people standing up for students and families. 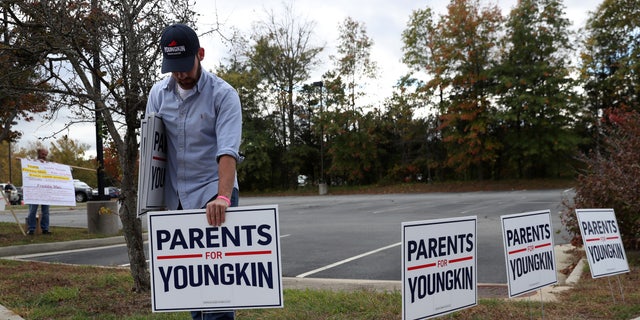 Tristan Thorgersen puts pro-Youngkin signs up as people gather to protest different issues including the board’s handling of a sexual assault that happened in a school bathroom in May, vaccine mandates and critical race theory during a Loudoun County School Board meeting in Ashburn, Virginia, U.S., October 26, 2021. Picture taken October 26, 2021. REUTERS/Leah Millis (REUTERS/Leah Millis)

Despite all this, some activists remain committed to icing out parents at every turn: In New York City just last week, the teachers’ union shut the schoolhouse doors in parents’ faces by announcing that parent-teacher conferences will be virtual only. Parents can request an in-person meeting, but they must be vaccinated and able to attend a meeting during the workday. For many families, this is prohibitive. For all families, it is obnoxious.

All of this illustrates that liberals have learned nothing from the reaction to the NSBA letter. The people who refuse to teach also refuse to learn. Perhaps the clearest sign of this is that the Department of Justice never retracted its memo. The NSBA apologized for its letter, but the memo predicated on that letter still stands.

This means that concerned parents are still operating under the threat of FBI investigation. The chilling effect the NSBA wanted, and that the Biden administration tried to facilitate, has not happened – to the benefit of our nation’s students and families.

One year later, every attempt to silence parents has only made them louder.

Angela Morabito is a visiting fellow at the Independent Women’s Forum and the spokesperson for the Defense of Freedom Institute.