Artemi Panarin, dissatisfied not only with his work in the playoffs but also during the entire the 2021-22 regular season, said he intends to revert to the more unpredictable style with which he played in his two seasons with the Blue Jackets and his first season with the Rangers.

“I was too much on the boards myself and with the puck,” Panarin, reprising thoughts he had first expressed late in the season, said through a translator. “There were definitely good parts of last season, 15 or 20 good games out of the main chunk of the season. There has to be more puck movement.”

Panarin finished 12th in the league in scoring with 96 points, and his 74 assists were fourth in the NHL and the second-most by a left wing in history, 11 shy of the mark Jonathan Huberdeau established last season. Panarin did, however, post only 48 points (13-35) at five-on-five, his fewest full-season numbers since his sophomore year in the league with the Blackhawks. 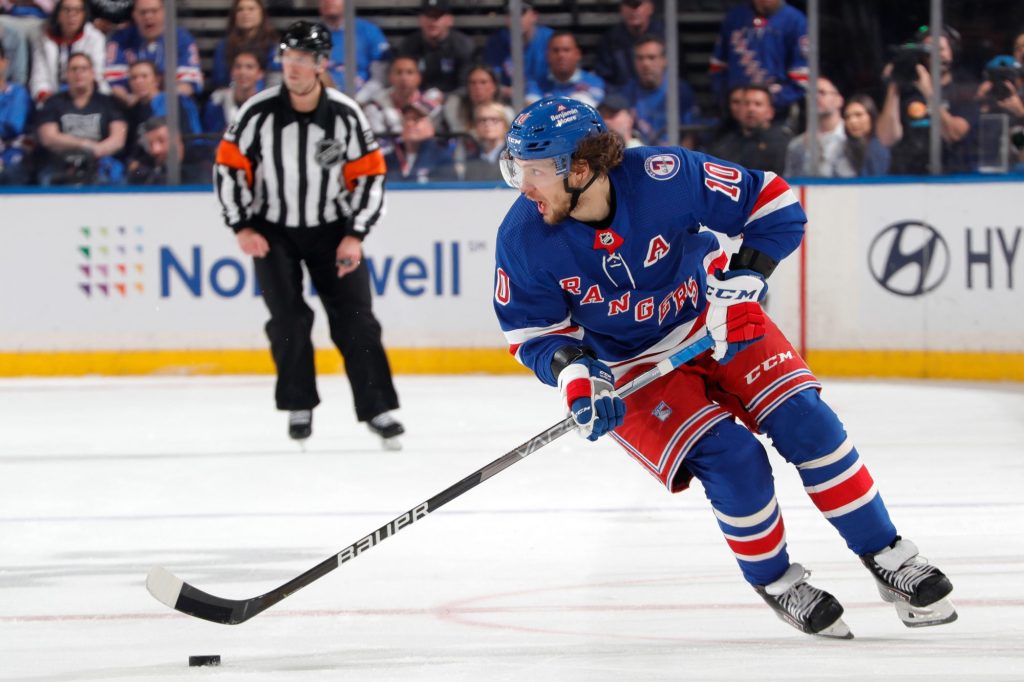 “I had no issue with him last year. None at all. I like the way he plays,” Gallant said. “We had a little chat two or three weeks ago and he said he wanted to be around the net more and I said that’s the same thing we want.

“When he gets the puck I want him to be creative. There’s no big secret to our system that everybody plays the same way. No, everybody doesn’t play the same way. And I see that.”

Panarin struggled to make an impact through the playoffs. He did score the overtime winner in Game 7 against the Penguins, but his numbers (6-10-16 in 20 games) look better than  his game did. He spent too much time on the periphery and made too many turnovers.

“I was not as satisfied as I should have. I wanted to do better,” he said. “I made plays that were a bit more unfortunate and the unfortunate mistakes I made probably shouldn’t have happened.

“When we were losing in games I had to take risks. When the risks didn’t pan out, it looked like I had done nothing. When that happened I lost confidence and then made different mistakes.”

Rather, the 26-year-old focused on correcting what he perceived as deficiencies in his game. When asked what areas he would look to improve, Shesterkin said: “Like I’ve said in previous years, ‘You’ll see.’

“I keep trying to get better. That depends only on me.”

The Blueshirts took it to the sixth game of the conference finals before their unexpected ride ended. The objective this season, as Shesterkin sees it, is straightforward.

“There’s only one goal — to win the Stanley Cup,” Shesterkin said. “I believe we are fully capable of that.”

Asked if one player had especially impressed during the three days of scrimmages at camp, Gallant named Dryden Hunt, who is competing for a fourth-line role on the wing. He has been working on a line with Jimmy Vesey and Gustav Rydahl.

“I’m satisfied with everybody but if there’s one guy who’s standing out a little bit, it’s Huntsie, to be honest with you. I think he’s been really good.”

The Rangers will play the first of six exhibition matches at the Garden on Monday against the Islanders before heading to Boston for a match Tuesday against the Bruins.

The Rangers trimmed their camp roster to 62 by sending Sam Alfano, Maxim Barbashev, Jayden Grubbe and Bryce McConnell-Barker to their respective junior teams.