Forget Patrick Kane and forget trade-deadline rentals all together. If the Rangers have no playoff aspirations, the club simply will not be a part of such conversations.

That is the reality the Rangers are drawing dangerously close to, and it was made abundantly clear after a dreadful 5-2 loss to the Blackhawks on Saturday night at Madison Square Garden. Despite playing a team which has had a disastrous season so far, the Rangers lost for the fifth time in their last six games.

Kane, who is in the final year of his contract and could be one of the top trade-deadline rentals available come March 3, had a front-row seat for the calamity. He even put up three points (one goal, two assists) to make himself a more enticing option for every NHL team watching.

The rumors of the Rangers’ interest in Artemi Panarin’s old friend and former Chicago teammate have been rampant for years, but at the rate the club is going this season, there might not even be a playoff push for Kane to join.

It may still be early, but it’s impossible to look at what the Rangers have done so far this season and think that the playoffs are in the cards unless significant changes occur. The Blackhawks came into Saturday sitting in second-to-last place in the NHL and on an eight-game losing streak, which included seven defeats in regulation. It should’ve been an opportunity for the Rangers to raise their spirits, but the opposite occurred. 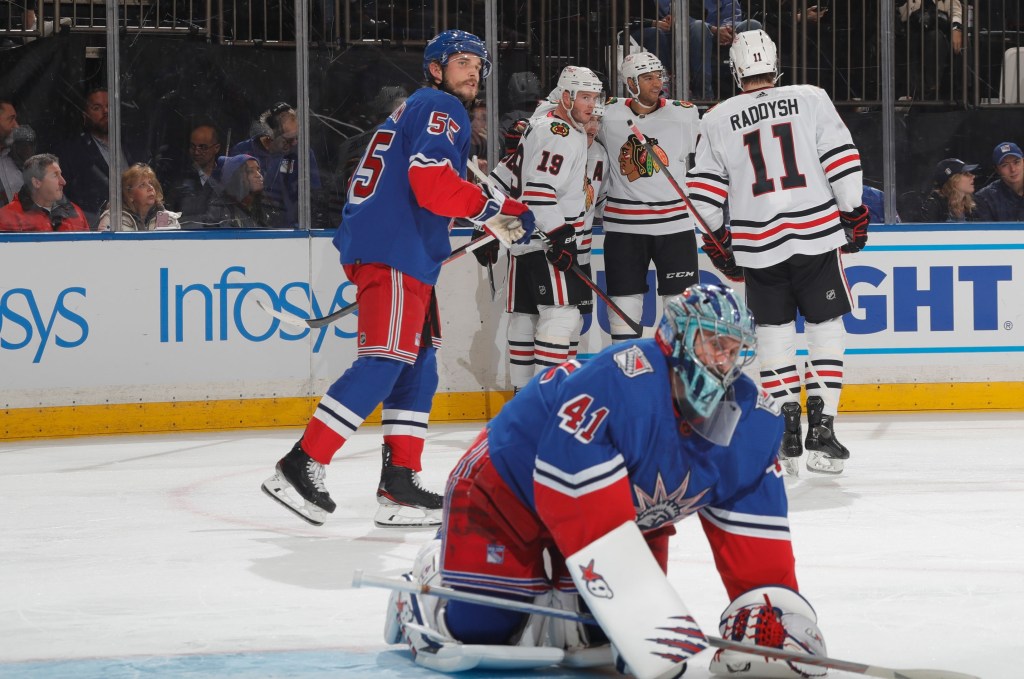 “We’re going through it,” an emotional captain Jacob Trouba said after the loss, which dropped the Rangers to 11-10-5. “There’s a lot of the story left to be written. It’s not a done thing by any means, but it’s going on for a bit now and something needs to change. There needs to be a little more of a pushback from ourselves within. We can’t keep doing the same thing and expecting a different result.”

Chicago hadn’t scored the first goal of a game in its previous 10 contests. But the Blackhawks did it against the Rangers, when Reese Johnson tipped in a slap shot from the point just over 2 ½ minutes into the game. The result provided the same energy as the Ducks taking their first win in regulation over the Rangers late last month. The Rangers continue to be the butt of other team’s joke streaks. 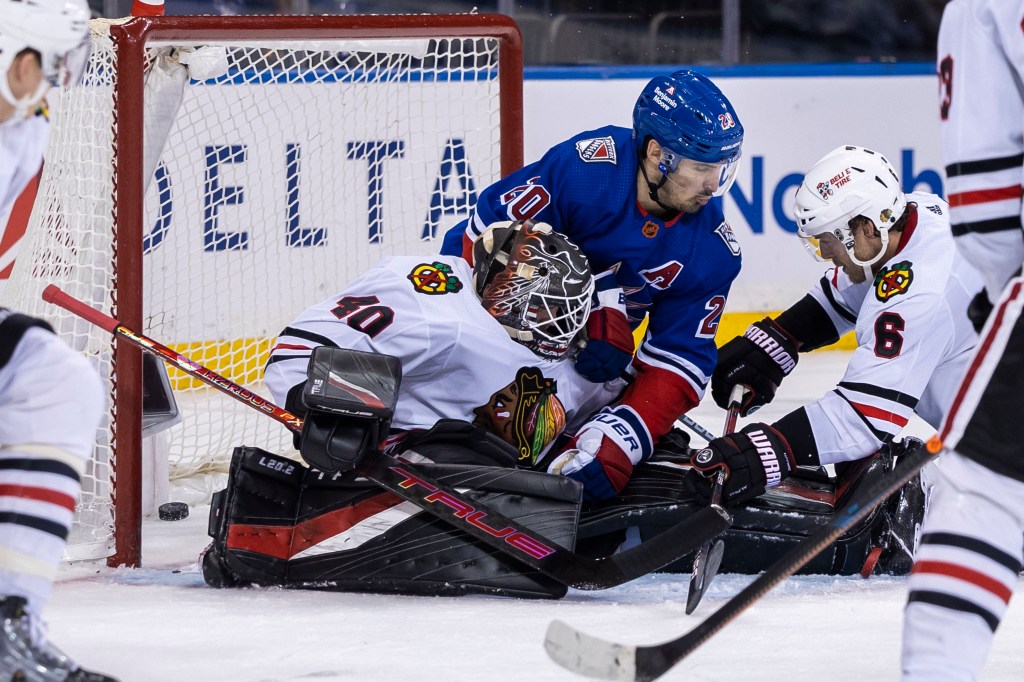 The home team’s resentment of every post, every missed open net and every single missed opportunity in recent games boiled over in the second period. Trouba just began throwing his body around, hoping to spark the Rangers in any way he could. He took a run at Chicago’s Jason Dickinson before having to answer to Jujhar Khaira, who had likely been waiting to drop the gloves with Trouba after the captain had laid him out last season.

After Mika Zibanejad and Ryan Carpenter each took an ill-advised penalty in the second period to put the Rangers on a 5-on-3 disadvantage, the Blackhawks scored twice on goals from Kane and Max Domi to take a 3-0 lead less than halfway through the middle frame.

Trouba then upended Andreas Athanasiou with an open-ice hit that turned into a full-on brawl. Trouba hurled his helmet on his way to the locker room, where he served his five-minute fighting penalty. The Rangers came out of it with a power play due to Jonathan Toews’ instigator penalty, which Zibanejad capitalized on, so Trouba’s efforts were not in vain.

“He’s trying, he’s trying to get the guys on board,” Rangers head coach Gerard Gallant said of Trouba. “Trying to pull them with him. Big leadership. Obviously, we don’t want Troubs fighting three times in a weekend, but he’s trying to get something out of our guys.”

But that was where the Rangers’ momentum started and ended. There was no carryover, no fanning of the flame and no will to keep it ablaze. Chicago later made it a 4-1 game with another power-play goal, this one from Taylor Raddysh in the third period. Even though the Rangers scored with 2:45 left in regulation during 4-on-4 play, off a weird sequence that was credited to Chris Kreider, there still wasn’t much to build off.

Every hypothetical that would bring Kane or any other notable addition to New York can be discussed, but none of them would mean anything unless the Rangers are in playoff position come the trade deadline. Instead, since Thanksgiving eve, the losses against should-be inferior clubs — including Anaheim (32nd), Chicago (31st) and Ottawa (28th) — have piled up.

The Rangers are running out of time to keep their postseason hopes alive. And if that continues, you can forget about it all.

Exclusive: John Fetterman Is Using This Assistive Technology in the Senate to Help With His Stroke Recovery