Russian-made helicopters and weapons were used in an airstrike in September that left 12 people dead — half of them children — at a Myanmar school, according to a human rights group that monitors violations in the Southeast Asian country.

Russia, which has diplomatic ties with Myanmar, denies the accusation.

The group, Myanmar Witness, made its allegations in a recent report detailing what it says happened at the Let Yet Kone school located on the compound of a Buddhist monastery in Let Yet Kone village in Tabayin township. The report says Mi-35 and Mi-17 helicopters were used in the attack that lasted several hours, along with Russian-made S-5 rockets.

“The remnants allegedly found at the location in Tabayin were confirmed to be S-5 rockets by our arms team," Myanmar Witness said in an email to VOA.

An alphabet book and a notebook lie on top of an elevated wooden floorboard of a middle school in Let Yet Kone village in Tabayin township in the Sagaing region of Myanmar on Sept. 17, 2022, the day after an air strike hit the school.

According to Zaw Min Tun, a spokesperson for the military junta, the troops were flown to the village after the government received word that fighters from the Kachin Independence Army (KIA) and a local anti-coup group known as the People’s Defense Forces were moving weapons into the village.

The junta accuses the KIA of supporting groups that oppose the military government. The KIA is seeking autonomy for the Kachin ethnic group.

There has been no response from the KIA or the People’s Defense Forces.

VOA spoke to villagers who say no weapons were in the area.

One of the children killed was 14-year-old Zin Ko Oo. In an interview with VOA, his father said the teenager did not want to go to school “because it was unsafe for students at school, and he feared soldiers would come to the school and shoot them.”

The father declined to be named for fear of retribution.

The school had an enrollment of around 300 elementary and middle school students. Locals told VOA that parents and volunteer teachers set up the school in secret after a February 2021 coup saw the overthrow of the democratically elected government of Aung San Suu Kyi. The coup triggered a civil disobedience movement, known as CDM, around the country.

On September 16, the day the two army helicopters attacked the school, Zin Ko Oo was attending class. When the helicopter gunships opened fire with machine guns and heavy weapons, he ran to a classroom where his niece and nephew sought shelter, his father told VOA.

“He helped to hide them under a wooden cot and covered them with his body and hands, but he was hit on the back of his head and legs by the bullets that came through the school’s roof.”

The grieving father said four small children were also struck in the hail of bullets and their bodies shredded. The father said he was told the four youngsters died on the spot, but Zin Ko Oo was brought to Ye-U hospital, 11 kilometers away from the village, where he later died.

The belongings left behind by Zin Ko Oo, a 14-year-old who died when his school in Myanmar was attacked.

The soldiers put the remains of the four children in garbage bags and took the bodies to their military post, Zin Ko Oo’s father said. From there, he said, the bodies were taken to a hospital for cremation.

“The military also did not allow the parents to see the bodies or have their children’s ashes back after the Ye-U hospital cremated them," the father said. The father also said he was told the parents did not know the bodies would be cremated.

Zin Ko Oo’s father also told VOA he was the only parent who had a chance to view his son’s body at the hospital. The father said he was able to do so only because he begged a military officer on duty to let him see his son one last time. Zin Ko Oo had already died by the time his father saw him.

Debris and soot cover the floor of a middle school in Let Yet Kone village in Tabayin township in the Sagaing region of Myanmar on Sept. 17, 2022, the day after an air strike hit the school.

“I asked a doctor to allow me to take my son’s body, but they refused because they were afraid of the army,” Zin Ko Oo’s father said, adding, "They finally gave me his ashes.”

Zin Ko Oo’s father said no one from the People’s Defense Forces had been in their village or the school as the regime’s spokesperson, Zaw Min Tun, alleged at a press briefing in the Myanmar capital, Naypyidaw, on September 20. The military spokesperson also accused the government's opponents of using the villagers as human shields.

“We have never ever seen this kind of brutal attack targeting a school and us. We were civilians and did not have any weapons. We were so terrified and running as much as we could,” Zin Ko Oo’s father said, in describing the attack.

Zin Ko Oo’s father told VOA his house and truck were burned by the soldiers. He said he lived five houses away from the west side of the monastery, where classes were in session. He said soldiers set fire to some of the motorcycles in a repair shop he owns.

Myanmar Witness stated, "The attack on Let Yet Kone school is part of an emerging trend that shows the Myanmar military’s pattern of increasing recklessness towards the safety of children, especially around schools." 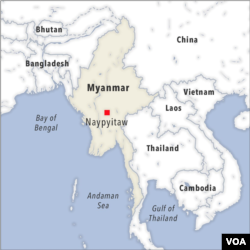 The Let Yet Kone school is in Sagaing, one of seven regions in the country.

There are thought to be 27 community schools, 4,000 students and 380 CDM teachers in Sagaing region, according to Myanmar Witness. The junta has outlawed such schools, arresting teachers as well as support staff.

"Another spot report was done on a school where a teacher was beheaded and fingers [were] mutilated so that one was definitely a killing with a message against CDM/NUG supported schools,” Myanmar Witness wrote in its email to VOA. The NUG refers to members of Myanmar’s exiled National Unity Government. It was established in opposition to the junta.

Separately, a group established in 2018 by the U.N. Human Rights Council said the school attack in Let Yet Kone village might be considered a war crime, with commanders criminally liable.

According to a September 27 statement by the Independent Investigative Mechanism for Myanmar (IIMM), “Armed attacks that target civilians are prohibited by international laws of war and can be punished as war crimes or crimes against humanity.”

Adrien Brody Reflects on His ‘Poker Face’ Character, Working With Rian Johnson, And Delivering a “Mountain of Dialogue”