Britain's royal family shared a photo on Saturday of the ledger stone marking the final resting place of Queen Elizabeth II, who died two weeks ago at the age of 96. She is interred in the King George VI Memorial Chapel, which is in the larger St. George's Chapel in Windsor.

Elizabeth is alongside her husband, Prince Philip, who died in 2021 at the age of 99. The late queen's mother, Queen Elizabeth, and father, King George VI, are there, too.

"The stone is made of hand-carved Belgian black marble with brass letter inlays, to match the previous ledger stone installed in the Chapel," a statement from the royal family said. 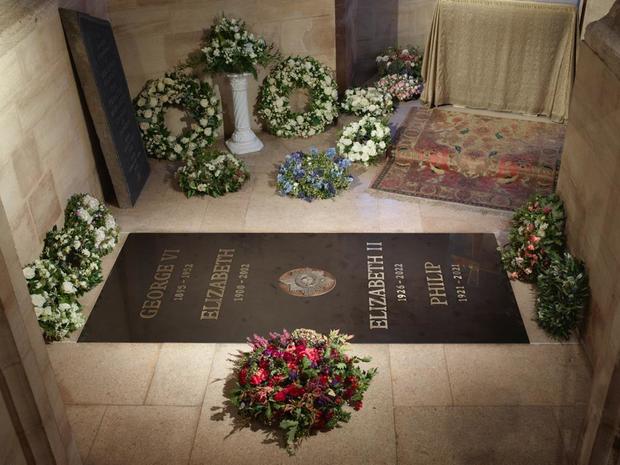 The final resting place of Queen Elizabeth II is shown at the King George VI Memorial Chapel at Windsor Castle. The Royal Family

The memorial chapel was completed in 1969. Queen Elizabeth II commissioned it as a final resting place for her father.

Also located in the memorial chapel are the ashes of Queen Elizabeth II's sister, Princess Margaret.

Construction on St. George's Chapel began under King Edward IV in 1475, and was completed more than 50 years later, when King Henry VIII was in power.

Since then, several members of the royal family have been married there, including Prince Harry and Meghan Markle in 2018 and Princess Eugenie and Jack Brooksbank later that same year.

In April 2021, Prince Philip's funeral was held in the chapel. However, due to the coronavirus pandemic, Queen Elizabeth II had to sit alone during the service.

A committal service for Queen Elizabeth II was held there on Sept. 19, hours after her state funeral. She was later interred in a private service.

The chapel still has daily services, which are open to the public.

Sophie Reardon is a News Editor at CBS News. Reach her at sophie.reardon@viacomcbs.com