Russian forces continued their shelling of the Ukrainian city of Zaporizhzhia Friday, firing “kamikaze” drones and rockets at the city for the second consecutive day — as the death toll from a missile attack on high-rise buildings rose to 12.

He also warned Ukrainians to be alert for a wave of drone attacks, as Russia was now using them in its siege on the city.

“The occupier uses all available weapons against the civilian residents of the region. Missiles, anti-aircraft guns, artillery, and now also so-called kamikaze drones. Be attentive!” he wrote on the Telegram messaging app.

“[If you] hear the sound of an engine nearby – immediately go to cover and stay there until the danger passes,” he said.

The governor included a diagram of the Iranian-made Shahed-136 drone, which the Ukrainian military has reported encountering on the battlefield in recent weeks.

While Tehran denies providing Moscow with weaponry, photos of downed UAV’s distributed by Kyiv show the tell-tale triangle wings of the Iranian drones. 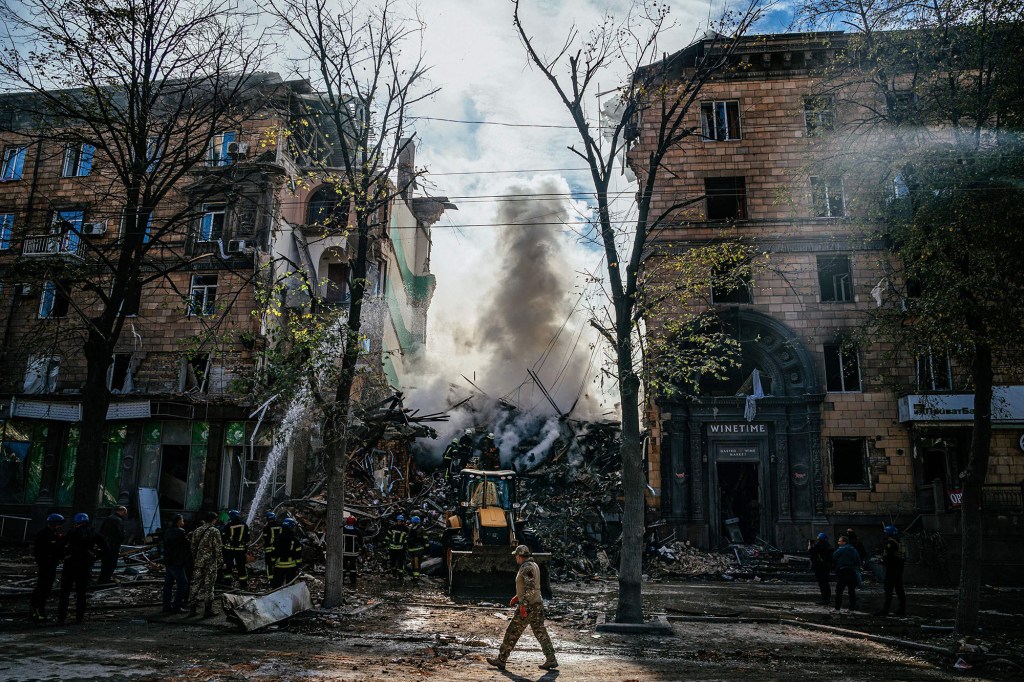 Much like the American-made Switchblade drones, the Shahed is designed to function as a so-called loitering munition, flying to its target before exploding.

Some Western analysts have posited that Russia’s increasing use of the slow-flying Shahed shows it is running out of ammunition for its own rocket artillery, which has pounded Ukrainian cities over the course of the seven-month war.

Starukh, however, said the rockets keep falling, along with Russian drones.

“The occupier uses all available weapons against the civilian residents of the region. Missiles, anti-aircraft guns, artillery, and now also so-called kamikaze drones,” he said.

Russia has repeatedly denied targeting civilians or residential areas, despite overwhelming evidence to the contrary.

Ukrainian authorities said the number of casualties from a bombardment on apartment buildings early Thursday rose to 12, while another dozen people remain hospitalized.

Starukh claimed another high-rise apartment building in Zaporizhzhia had been hit by Friday’s salvo.

The governor said late Friday that several Russian rockets had been shot down by Ukrainian air defenses over the Zaporizhzhia region, but told residents to remain in their shelters.

“There is a risk of repeated shelling,” he said.