Paris — Iranian students have clashed with security forces at a top Tehran university amid the wave of unrest sparked by the death of Mahsa Amini, state media and rights groups said Monday. Kurdish Iranian Amini, 22, was pronounced dead on September 16, days after she was detained for allegedly breaching rules forcing women to wear hijab headscarves and modest clothes, sparking Iran's biggest wave of protests in almost three years.

Iran's supreme leader, Ayatollah Ali Khamenei, finally broke his silence on the chaos in his country Monday, telling a group of police cadets that the U.S. and Israel were behind the "rioting" in Iran. Khamenei called Amini's death "a sad incident" that "left us heartbroken," but condemned the protests as a "planned" foreign plot to destabilize the country. 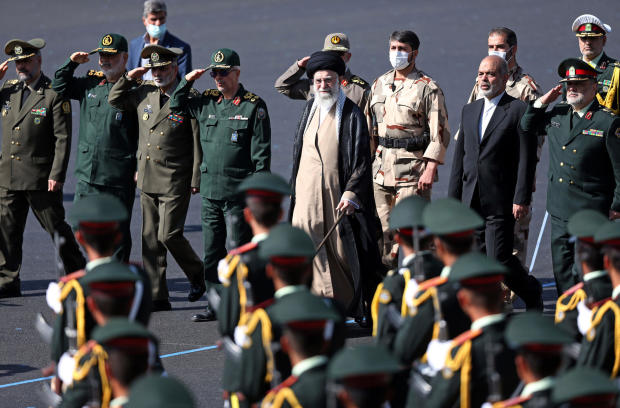 A photo released by the office of Iran's Supreme Leader Ayatollah Ali Khamenei, the supreme leader, center, reviews a group of armed forces cadets during their graduation ceremony at the police academy in Tehran, Iran, October 3, 2022. Handout/Office of the Iranian Supreme Leader/AP

"This rioting was planned," he told cadets gathered in Tehran. "I say clearly that these riots and insecurities were designed by America and the Zionist regime, and their employees... Such actions are not normal, are unnatural."

Outside rights groups say more than 80 people have been killed since Iran's security forces started cracking down on the protests, with some members of the forces among the dead. 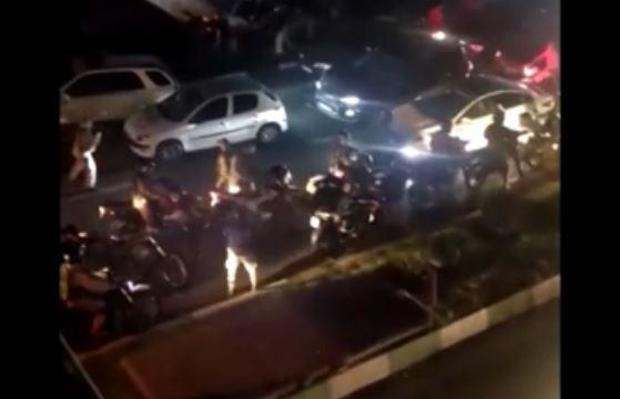 An image from cell phone video obtained by the Reuters news agency purportedly shows Iranian security forces and protesters on a street in front of Tehran's Sharif University of Technology during clashes amid nationwide protests, October 3, 2022.  REUTERS/UGC

"Woman, life, liberty," students shouted, as well as "students prefer death to humiliation", the Iranian Mehr news agency reported, adding that the country's science minister later came to speak to the students in an effort to calm the situation.

In other video, which could not be independently verified, shooting and screaming can be heard as large numbers of people run down a street at night.

"Security forces have attacked Sharif University in Tehran tonight. Shooting can be heard," IHR said in a Twitter message Sunday.

In another video clip, a crowd of people can be heard chanting: "Don't be afraid! Don't be afraid! We are all together!" IHR said the video was taken at Shariati metro station in the capital Tehran on Sunday.

The New York-based group Center for Human Rights in Iran said it was "extremely concerned by videos coming out of Sharif University and Tehran today showing violent repression of protests + detainees being hauled away with their heads completely covered in fabric."

Mehr news agency said that "Sharif University of Technology announced that due to recent events and the need to protect students ... all classes will be held virtually from Monday."

Since the unrest started on September 16, dozens of protesters have been killed and more than a thousand arrested. Members of the security forces have been among those killed.

As CBS News correspondent Roxana Saberi reported over the weekend, the anti-government protests have entered their third week despite severe internet restrictions and a heavy-handed crackdown by Iran's security forces aimed at quashing the upheaval.

What are the protests all about?

And while Iranian women have taken part in other nationwide protests, Saberi said this time, the spark for the unrest was a woman's death — and it was a female journalist — Niloufar Hamedi of the Shargh daily, who broke the story.

Hamedi was arrested and placed in solitary confinement in Tehran's notorious Evin Prison for her work. She is one of at least 19 journalists, including seven women, who have been detained across the country since the protests began, according to  Reporters Without Borders. The Center for Human Rights in Iran puts the figure at 25 or higher.

"This is the first time that women in a large number, standing shoulder to shoulder with men, are burning their headscarves," Masih Alinejad, an Iranian journalist and activist who fled Iran in 2009 and is now based in New York, noted told CBS News.

The headscarf or hijab "is the main pillar of the Islamic Republic," said Alinejad, who runs an online campaign called "My Stealthy Freedom" that shares images of women and girls in Iran flouting the hijab rules.

She said Iranian women "strongly believe that by burning headscarves, they're actually shaking the regime."

In the decades before the 1979 Islamic Revolution, Saberi said women were commonly seen on the streets of Iran dressed in both the hijab and in the latest Western fashions. But soon after the revolution, the new Islamic regime ruled that women and girls from a young age had to cover their hair and bodies in public. Hardliners proclaimed the hijab would protect women's honor, but for many protesters, it has remained a powerful symbol of oppression.

The women who've been demonstrating want to have the choice of whether or not to wear the hijab, according to Azadeh Pourzand, co-founder of the US-based  Siamak Pourzand Foundation, promoting the freedom of expression in Iran.

"It's about essentially women feeling humiliated and women feeling forced to do something that they may or may not want to do," said Pourzand, who is also a PhD researcher at the University of London focusing on women's activism in Iran. 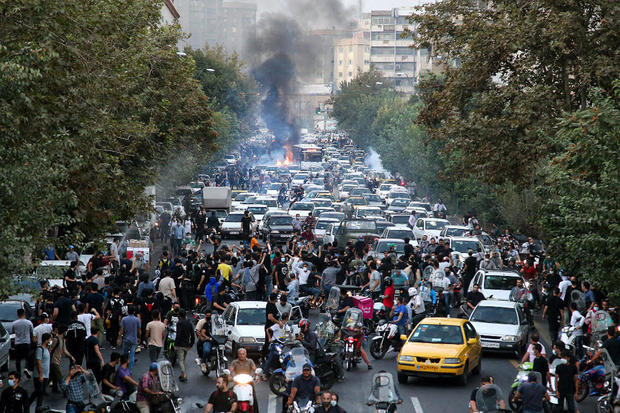 People stage a demonstration to protest the death of a 22-year-old woman under custody of the morality police, in Tehran, Iran, September 21, 2022. Stringer/Anadolu Agency/Getty

While Iranian women have pushed for legal reforms for years, very little has been achieved, she said. Women are present in society, particularly in higher education, but family and employment laws remain deeply discriminatory toward women, as do norms and practices, she said.

Pourzand said the ongoing protests have united Iranians across different ages, ethnicities and cities. Demonstrators are calling not only for women's rights, but also protesting against political repression more broadly, and mismanagement and corruption that have left Iran isolated globally, and its economy flailing.

Iran: Crisis In The Middle East