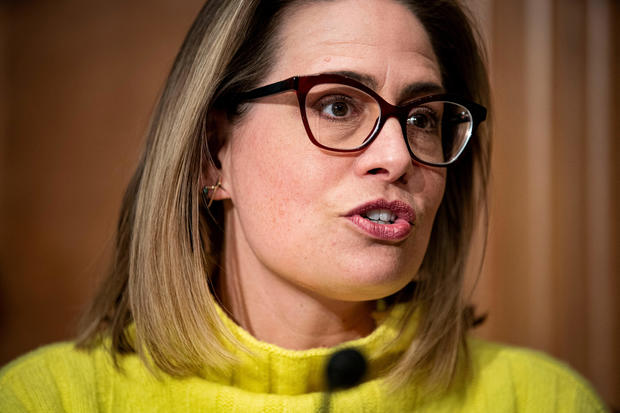 Washington — Democratic Sen. Kyrsten Sinema of Arizona announced Friday that she's registered as an independent but doesn't plan to caucus with Republicans, ensuring Democrats will retain their narrow majority in the Senate.

Sinema, who has modeled her political approach on the renegade style of the late Sen. John McCain, R-Ariz., and has frustrated Democratic colleagues at times with her overtures to Republicans and opposition to Democratic priorities, said she was "declaring my independence from the broken partisan system in Washington."

"I know some people might be a little bit surprised by this, but actually, I think it makes a lot of sense," Sinema told CNN on Thursday. "I've never fit neatly into any party box. I've never really tried. I don't want to,"

The first-term senator wrote in the Arizona Republic that she came into office pledging "to be independent and work with anyone to achieve lasting results. I committed I would not demonize people I disagreed with, engage in name-calling, or get distracted by political drama. I promised I would never bend to party pressure."

She wrote that her approach is "rare in Washington and has upset partisans in both parties" but "has delivered lasting results for Arizona."

Democrats were set to hold a 51-49 edge in the Senate come January after the victory Tuesday by Democratic Sen. Raphael Warnock in Georgia's runoff election. The Senate is now split 50-50, with Vice President Kamala Harris the tiebreaking vote for Democrats.

Sinema told Politico in an interview that she won't caucus with Republicans and that she plans to keep voting as she has since winning election to the Senate in 2018 after three House terms. "Nothing will change about my values or my behavior," she said.

She's facing reelection in 2024 and is likely to be matched up with a well-funded primary challenger after angering much of the Democratic base by blocking or watering down progressive priorities such as a minimum wage increase or President Biden's big social spending initiatives. She hasn't said whether she plans to seek another term.

Sinema's most prominent potential primary challenger is Rep. Ruben Gallego, who has a long history of feuding with her.

"When politicians are more focused on denying the opposition party a victory than they are on improving Americans' lives, the people who lose are everyday Americans," Sinema wrote. "That's why I have joined the growing numbers of Arizonans who reject party politics by declaring my independence from the broken partisan system in Washington. I registered as an Arizona independent."