The program, which would grant up to $20,000 in federal debt relief to student borrowers who make under a certain income, has been blocked by lower courts since November though the administration had planned to start rolling out cancellations by the end of this month after first announcing the plan in August.

The White House appealed the lower court decisions and asked the Supreme Court to vacate the injunctions that are stopping loan forgiveness from being disbursed.

Now that the high court has agreed to do so, borrowers can expect clarity on the fate of loan debt forgiveness by the end of June, when the Supreme Court's term ends and it issues the majority of its decisions. February's arguments are also likely to give insight into how the justices view the program.

No loans can be forgiven until the Supreme Court makes a decision and the justices rejected the administration's request to allow the program to proceed while the case plays out in court.

Twenty-six million people applied before the program was paused, according to the Department of Education, and 16 million peoples' applications were reviewed and authorized for relief -- though no loan cancellations were dispatched before court orders blocked the program.

The legal limbo poses a threat to Biden's pledge to cancel student loan debt for up to 43 million Americans. He first made such a promise during his 2020 presidential campaign and reiterated it during the 2022 midterm elections, when he repeatedly told crowds of supporters he believed was on solid legal ground and would win out over Republican attacks on the plan.

Conservatives and other critics said loan debt forgiveness was beyond the power of a president and penalized those people who either didn't take out loans or who had paid them off. 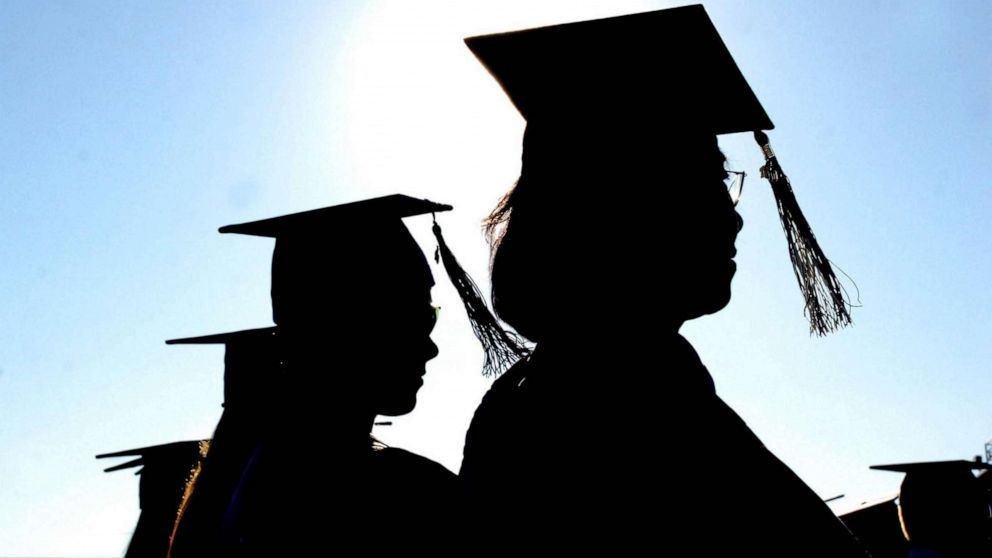 Graduates line up during commencement ceremony in Mansfield, N.J., June 18, 2010.

"As soon as I announced my administration’s plan on student debt, they started attacking it, saying all kinds of things. Their outrage is wrong and it’s hypocritical," Biden said in late October at a rally at Delaware State University. "We’re not letting them get away with it."

But while early court cases against the program were thrown out for lack of standing -- that is, for lack of someone or some entity showing they were harmed by it -- subsequent challenges were more successful. An appeals court in Missouri and a district court in Texas, in two separate cases, ruled that the program was unlawful and an overreach of the Biden administration's powers.

Those decisions left the program in a precarious position just as student loan payments were set to restart for the first time in nearly two years, after a lengthy COVID-19 pandemic pause, and student loan advocacy groups successfully lobbied the Biden administration to stave off loan repayments yet again.

Payments will not begin again until the fate of the program is decided, Biden announced in late November -- a change from earlier plans to end the moratorium on loan payments once and for all on Jan. 1.

Student loan payments will resume either 60 days after the Supreme Court issues a decision on the relief program, Biden said, or 60 days after June 30 -- whichever comes first.

“Callous efforts to block student debt relief in the courts have caused tremendous financial uncertainty for millions of borrowers who cannot set their family budgets or even plan for the holidays without a clear picture of their student debt obligations, and it’s just plain wrong,” Secretary of Education Miguel Cardona said in a November statement announcing the extension on the moratorium.

“We’re extending the payment pause because it would be deeply unfair to ask borrowers to pay a debt that they wouldn’t have to pay, were it not for the baseless lawsuits brought by Republican officials and special interests," he said then.

This is a developing story. Please return for updates.

This robot vacuum from Shark is $200 off on Amazon

Joy Behar slams ‘The View’ haters: ‘I’m not moving out of this seat’

IRS tells millions of Americans to hold off on tax filing