The United Nations Human Rights Council on Friday renewed the mandate of its fact-finding mission in Venezuela, an initiative that Caracas has criticized as an aggressive tool for interfering in domestic matters.

The renewal of the mandate, created in 2019 to assess alleged human rights violations committed in Venezuela since 2014, was approved by 19 votes to 5 against and 23 abstentions during a Council session in Geneva. The mission's work will continue for another two years.

Those opposed were Cuba, Bolivia, China, Eritrea and Venezuela itself, whose representative to the Council, Ambassador Hector Constant Rosales, dubbed the resolution "hostile." 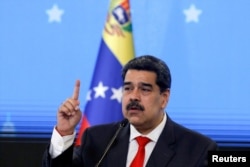 In September, the third report of the International Independent Fact-Finding Mission for Venezuela (FFM) found that state intelligence agencies under the helm of President Nicolas Maduro had suppressed the opposition through arbitrary detentions and torture that amounted to crimes against humanity.

The intelligence agencies "made use of sexual and gender-based violence to torture and humiliate their detainees" since at least 2014 and "the violations and crimes ... continue to this day," the report said.

The Venezuelan government said the accusations in the report were "false and unfounded."

"Through a false report, without the slightest methodological basis or direct contact with the real situation of the country, they intend to keep attacking Venezuelan institutions," the government said in a statement in September after the report was released.

Venezuela is a "democratic and social state, based on the rule of law and justice, which is committed to the promotion, respect and protection of human rights," the government added.

The renewal was a "sign of support for the countless victims of grave human rights violations that have been, and continue to be, committed in the country," Amnesty's Americas Director Erika Guevara Rosas said on Twitter.

Human Rights Watch called the FFM's extension "extremely important" and said it plays "an early warning role in the lead up to the 2024 presidential elections."