If there is a more obscure position group across the NFL than the Giants’ tight ends, odds are those players are not nearly as productive as this trio of unknowns.

Rookie starter Daniel Bellinger and veterans Tanner Hudson and Chris Myarick began the season with combined career numbers of 11 catches for 124 yards and one touchdown in 30 games. An expectation thus developed that they would be minimized in the passing attack, but Bellinger and Myarick have caught two of Daniel Jones’ three touchdown passes this season and Bellinger has a team-high seven receptions over the last two games.

“We knew nobody knew about us, but that’s how we like it,” Bellinger told The Post. “We knew we were going to step up. Of course we have to keep improving the small stuff, but Tanner and Chris are great leaders helping me grow a lot, so as a whole I think we are coming along.”

Hudson made his presence felt by securing a downfield block that allowed Jones to finish off a 21-yard touchdown run. The ability of all three tight ends to seal blocks has been an understated but important part of the improved rushing attack, as it was a weak point of former five-year starter Evan Engram’s skill set. 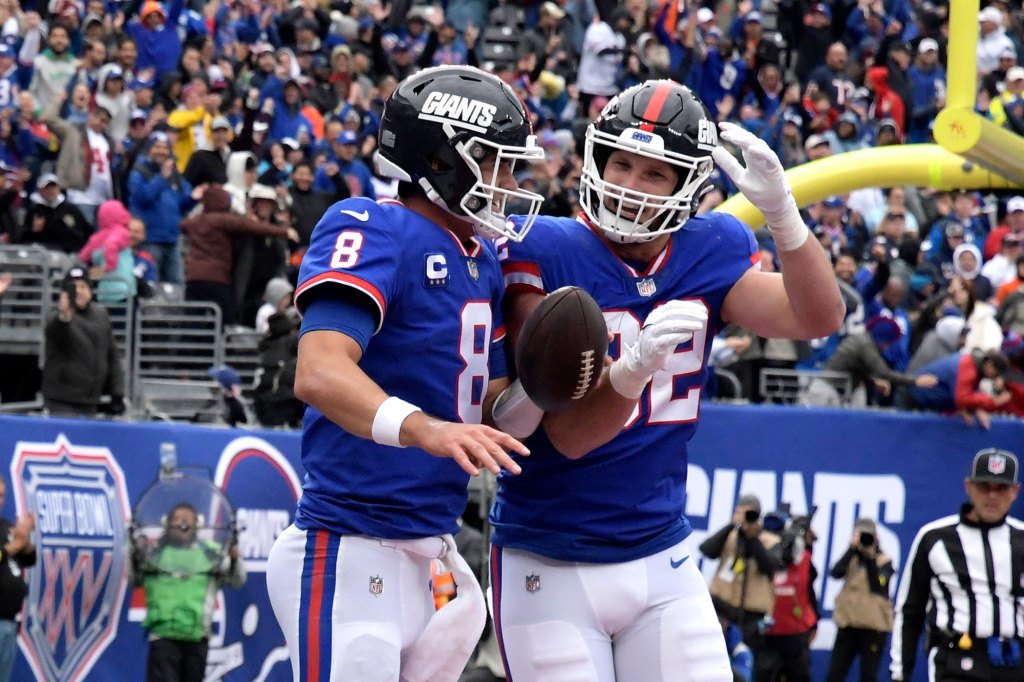 “As a tight end, you have to be aware and alert for anything. Daniel, Myarick and I are always ready to get down in the trenches,” Hudson said. “You have to keep your hands inside and do what you can to not get the holding call. Just shield him off to the best of my ability.”

The game plan against the Bears called for all three tight ends to play at least 37 of the 65 offensive snaps. Jones repeatedly faced an easy decision: Bootleg to an empty side of the field with a rolling tight end and throw if the lone defender stepped toward him or run if he stayed in coverage.

How unusual is that formation? The Giants played 25 snaps all last season in “13” personnel (one running back, three tight ends), according to Sharp Football Stats. Undrafted rookie Austin Allen, a member of the practice squad, is the fourth member of tight ends coach Andy Bischoff’s room.

“We’re not looking for attention here or there,” Hudson said. “We’re just coming into work every day. Bisch has a great eye for everything.”

The irony is that only Myarick has the reputation of a block-first tight end. But Hudson has the second-highest run-blocking grade among tight ends, according to Pro Football Focus. Myarick, who doubles as a fullback, is ranked No. 9, and Bellinger, a fourth-round pick, is tops among rookies.

“It’s old-school ball: Put our hand in the dirt and let’s get some yards,” Bellinger said. “That’s how we feel.”

It’s helped atone for the underwhelming production for Giants’ wideouts.

“Bellinger is young and Tanner and Myarick don’t have a ton of experience or a ton of production in the league,” head coach Brian Daboll said, “but … they’re earning the trust of the coaches to put them out on the field more.”